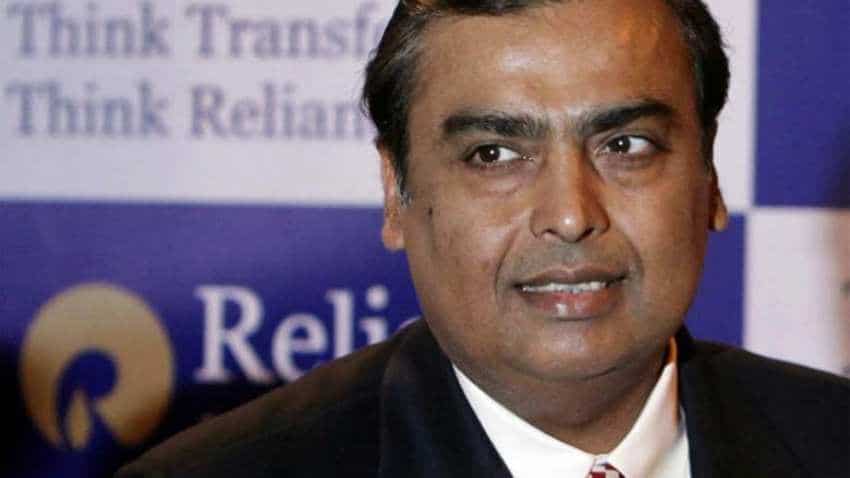 Reliance Industries was among the top gainers of the S&P BSE Sensex, which traded at 38,356.55, up 70.80 points or 0.18 per cent today. Image source: Reuters
Written By: ZeeBiz WebTeam
RELATED NEWS

Mukesh Ambani led Reliance Industries (RIL) today registered another milestone to become the first Indian company to cross Rs 8 lakh crore in market capitalisation. RIL shares rose 1.72 per cent to hit a record high of Rs 1,268 in the afternoon trade on the BSE. This led to the company's market valuation soaring to Rs 8,04,247.76 crore in the afternoon trade.

Investors continued to buy Reliance Industries shares on expectation of additional revenue from Reliance JioGigaFiber, the telecom firm’s broadband service, and Jio Phone 2 when they are launched.

Earlier on July 13, the market valuation of RIL surged past Rs 7 lakh crore mark, making it the second company after TCS to achieve this milestone.

In July, Reliance Jio had also reported a 19.9% growth in net profit at Rs 612 crore for April-June 2018 over the previous quarter, stating its strong first quarter performance "despite competitive intensity". The company had registered a net profit of Rs 510 crore in the January-March 2018, Reliance Jio statement had said.

Notably, Morgan Stanley in its August 16 report said, “We value RIL’s retail business at F20e EV/sales of 0.8x. This is in line with the average of the two comparable listed retail players, Future Retail Ltd and Shoppers Stop Ltd (both based on Bloomberg consensus estimates).”

The Reliance Industries' telecom arm had posted a loss of Rs 21.27 crore in the quarter ended June 2017. Reliance Jio's revenue from operations came in at Rs 8,109 crore in the June quarter, up nearly 14% from the fourth quarter of FY'18. Its subscriber base was at 215.3 million at the end of June.

According to Trai data, Reliance Jio added 9.71 million users in June, taking its subscriber base well past 215 million. Reliance Jio reportedly recorded market share gain to 18.78% from 18.7% a month ago.