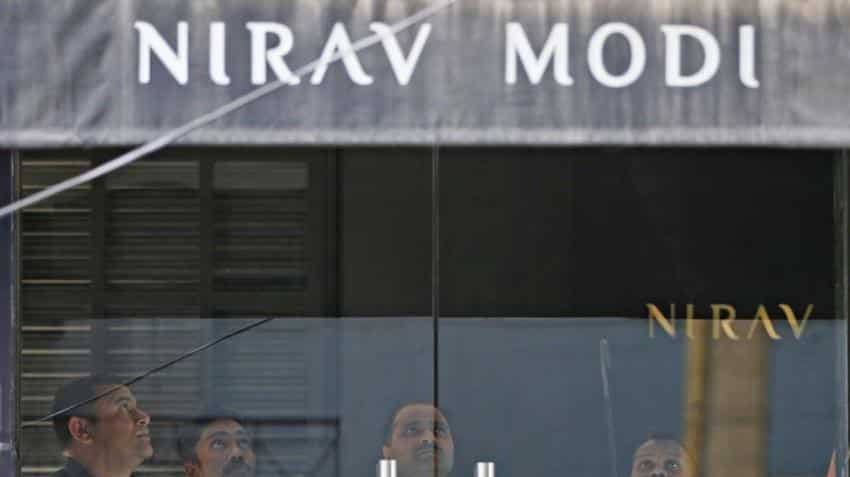 The CBI FIR has listed eight fraudulent transactions worth over Rs 280 crore based on complaints from PNB. Image source: Reuters
Written By: ZeeBiz WebTeam
RELATED NEWS

Even as the CBI has registered a fresh FIR against Gitanjali Group promoter Mehul Choksi in connection with alleged fraud in the issuance of Letters of Understanding worth Rs 11,400 crore from Punjab National Bank, the central probe agency also arrested two bank officials, including a now retired deputy manager, and an authorised signatory of billionaire Nirav Modi's company.

According to reports, Gokulnath Shetty, then deputy manager (now retired), Manoj Kharat, a single window operator of PNB, and Hemant Bhat were taken into custody by the agency in connection with its FIR registered on January 31 against Modi, his companies and uncle Mehul Choski.

The FIR has listed eight fraudulent transactions worth over Rs 280 crore but based on further complaints from the bank, the amount reportedly investigated in the first FIR is over Rs 6,498 crore.

It involves 150 Letters of Understanding (LOUs) allegedly fraudulently issued by Shetty and Kharat.

The remaining 150 fraudulent LOUs worth over Rs 4,886 crore issued for Gitanjali group of companies are part of the second FIR registered yesterday by the CBI against Choksi and his companies Gitanjali Gems, Nakshatra Brands and Gili, the PTI report quoting officials said.

All these LOUs were reportedly issued or renewed during 2017-18, the officials said.

The LoUs were issued by the Punjab National Bank to Indian banks in Mauritius, Bahrain, Hong Kong, Antwerp and Frankfurt for the accused companies, the officials said.

The accused officials issued fraudulent and unauthorised letters of undertakings in favour of foreign branches of different India-based banks, but they omitted entries of LoUs in the core banking system of the bank issued on behalf of the accused companies to avoid detection.

It is alleged that they used SWIFT--global messaging service to move money internationally--and did not make any entries in core banking system, used to process daily transactions, to avoid any scrutiny.

As the terms like letters of undertakings, SWIFT has repeatedly been mention, let’s try to understand what do these terms stand for, and how the loopholes were exploited.

LoU is sanctioned by one party, such as an independent contractor, describing the scope of work that’s going to be provided.

In Nirav Modi’s case, LoU is a bank guarantee and was issued for overseas payment. By giving LoU, PNB agreed to repay the principal amount and interest on the clients (Nirav Modi) loan unconditionally.

In this case, PNB officials apparently used their access to SWIFT messaging system, which is used for overseas transaction. This led into verification guarantees on LoUs without taking necessary sanctions. And overseas branches of Indian banks sanctioned forex credit.

According to Investopedia, the Society for Worldwide Interbank Financial Telecommunications (SWIFT) is a member-owned cooperative that provides safe and secure financial transaction for its members.

Available since 1972, SWIFT acts as a standardized proprietary communications platform to facilitate the transmission of information about financial transactions.

In this case, SWIFT provided the bank’s consent and guarantee. For issuing SWIFT, a official will need to log in and fill up confidential information like account number and SWIFT code.

Generally, there are three steps of security - a maker, a checker and a verifier with core banking system before SWIFT is issued.

In PNB’s case, it was observed that earlier issuance of LOU had been made by the branch officials through SWIFT without obtaining approval of the competent authority, necessary applications from importer, documents of import, legal documentation with bank and also without making entries in bank's trade finance module of CBS system.

Gartner defines a core banking system as a back-end system that processes daily banking transactions and posts updates to accounts and other financial records.

The updates in CBS are made in real-time. If you are thinking how come PNB missed such a fraud, because the branch officials through SWIFT without obtaining approval of the competent authority.

It may be noted that investigating agencies have been roped into to ascertain the financial impact on the banking system.