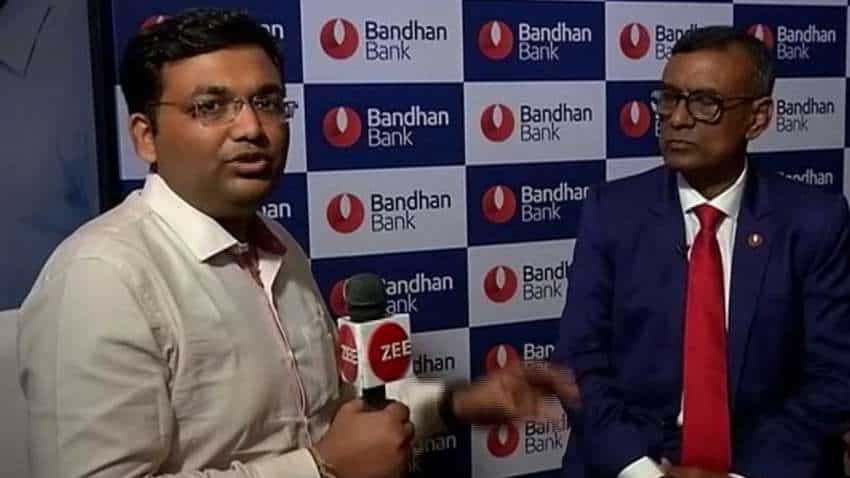 Small credit demand is high in the rural areas of the country and it can be fulfilled by having employees with skills, says MD & CEO, Bandhan Bank.
Written By: Jitesh Kumar Jha
Edited By: Asit Manohar
RELATED NEWS

Stocks in Focus on October 17: Edelweiss Financial, NALCO to DHFL; here are the 5 Newsmakers of the Day

How were the results in this quarter as you are disclosing it after the merged entity came into existence? Do you feel pressure in any segment?
We work at the ground level with a large number of people. Small credit demand is high in the rural areas of the country and it can be fulfilled by having employees with skills who can understand their demand by assessing it accordingly. When it comes to credit providers of the market, then private banks are available for the purpose in the metro and urban market but the same work is done by the public sector banks in the rural region. However, small ticket credit is high in the rural region and this provides more opportunities to the banks and our bank is focusing on the same.

There is an increase in your net and gross NPA. Have you seen some slippages in this quarter?
The NPA situation in small ticket credits is low, which is okay, but, seasonal challenges comes in force at times. Seasonal challenges include floods that every state faced in the last quarter. This flood had some impact on it. The floods are over but people will take some time in repaying the loan and that's why certain slippages are visible. But, I have the confidence that these people will return the money and then go to their business.

Had the unrest in the North-East region had any impact on your collection which led to additional provisioning at the banks end?
We have been working in the North-East region for the last 13 years. The banks who used to lend us money when we were working as NBFC restricted us from providing loans to people in the North-Eastern region because they thought that they won't re-pay it. Our bank perhaps took an initiative to lend them money from our own capital. After a year, the banks told us to expand the business. They further added, they would increase the lending amount in accordance with the way their portfolio expansion will happen in the region. It happened just because they understood the practicality, how the people are good and were repaid. Small pockets had few issues which do not take long to resolve. It basically takes 1-3 months to overcome. And, we are already out of it, for instance, we, earlier, used to take on-time repayment that is how many people were repaying and how many were supposed to pay. It used to be 98 in the past, which fell to 78 and after has returned back to around 93.6 in 10 weeks. And, we are very confident in the context of the North-East and Eastern region of India.

You also lend to the housing sector. So, let us know about the kind of demand and sentiments that are visible in the segment? Has your bank passed-on the benefits of RBI rate cuts to the customers, if yes, to which level?
The product provided by us is linked with the external benchmark rate. The interest rate is not a problem but the problem is related to reaching the people who need housing loan. There are two types of people who need money for a housing loan and they are salary-based people and self-employed people. Rural areas have more self-employed people than salary based and we have our main focus in that area only. There is a demand but it needs fulfilment of certain things like people to have a joint family and haven't divided their land, which is a challenge. The second challenge is that they have agricultural land which takes some time to convert. After being offered the loan, they take 3-6 months in converting the land and divide it among themselves reach us back.

What are your expectations from the budget and what improvements do you want to see in the budget for the improvement of your sector?
I met the Prime Minister and the finance minister during the pre-budget meeting and provided my suggestion to them that is important for the public. They heard it passionately and also had an interaction on the same. Also, the budget is for the country and for all the people living in the country so defiantly we shall also be benefited from it.

Stocks in Focus on October 17: Edelweiss Financial, NALCO to DHFL; here are the 5 Newsmakers of the Day