NFL's borrowing went up due to an increase in subsidy receivables: Manoj Mishra, CMD

In an interview with Zee Business, Manoj Mishra, Chairman & MD, National Fertilizers Limited (NFL), said that foray into non-urea segment has helped us in increasing our turnover. 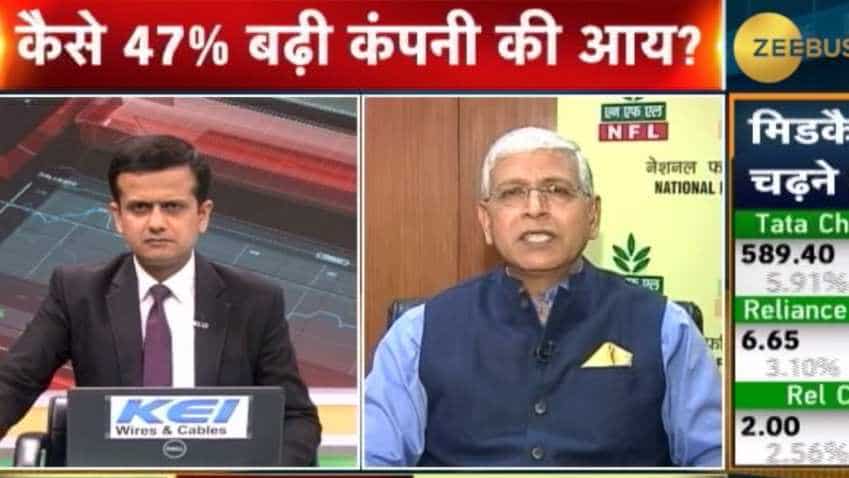 Q: NFL’s revenue and EBITDA have gone up by 47 per cent and 65.2 per cent in the fourth quarter of FY2019. Can you tell us about the key highlights of the result?
A: The increase in turnover can be credited to our foray into the non-urea sector which has increased significantly. We handled around 10 lakh tonnes of which 6.5 lakh tonnes have converted into sales. Gas price is the second thing that played an important role in increasing the turnover as well as cost. The third factor that helped us in increasing the EBITDA and turnover is the increase in interest expenditure, which has increased by more than Rs100 crore. Interestingly, our PAT or PBT didn’t go up in line to the EBITDA because a large portion of the EBITDA has moved out in form of interest payment. Interest has gone up by more than Rs100 crore.

Q: Your borrowings have gone up significantly over last year. Do you plan to reduce them or will to borrow further in the coming quarter and FY20?
A: Increase in subsidy receivables has increased our borrowings/debts. Currently, we had a subsidy outstanding of around Rs5,000 crores on March 31 and borrowing was needed to finance it. interestingly, subsidy inflow has started in April 2019 and it will help us in bringing down the borrowing levels. In fact, the complete subsidy doesn’t reach to the industry on time because of budget constraints and this is a problem for us and we are struggling with it. And, therefore our interest expenditures have gone up from Rs190 crore to more than Rs310 crore.

Q: Did PM-Kisaan Samman Nidhi scheme had any impact on the profitability of the company, if yes, then what are your expectations for the year?
A: See, there is no such relation that can establish a one-to-one linkage between the government’s policy and increase in farmer’s income, which can increase
See, there is no such mechanism that can establish a one-to-one relationship between the government’s policy to increase the income of the farmer and our profit. However, any increase in farmers income increases their abilities to buy compost/manure and seeds, which will translate into higher business for us. It will increase the demand for manure, seeds, agro-chemicals and method of advanced agriculture. There is no one-to-one relation between the two.

Q: Do you plan to launch any new set of products in FY20?
A: We will go to the places where we have opportunities but currently, will focus especially on fertilizers where we will try to run urea in an efficient manner. When it comes to non-urea segments than we will try import things like di-ammonium phosphate (DAP) and Muriate of Potash (MOP) and is available for the farmers.  Apart from this, we have selected two more fields for the purpose and they are seeds and agro-chemicals. The seed is a segment where we process the raw seed and duplicate it while some investments will be made on the agro-chemical front.

Q: When it comes to expansion then update us on the joint venture in Algeria where you are going to establish a di-ammonium phosphate (DAP) plant?
A: See, new project launch should be looked as an endeavour to enter the products that were not available with us. In fact, we were manufacturing and selling only urea till 2014-15 but today we are into different products like DAP, NPK and MOP products. We have brought just a ship of MOP products in the last four years but have made a contract to bring it to the country. Interestingly, India imports 100 per cent MOP that is used here but we were not functioning in the segment but have signed an agreement under which we will bring it to the country. Apart from this, National Fertilizers Ltd. will also try to enter all those segments/spaces that is available in India, but we were not functional in the domain. This endeavour has helped us in increasing the number of products that are sold by the NFL. So, we will be bringing certain products like water-soluble fertilizers among others. It means we will be selling almost everything that is bought by the farmers.

Q: What are your CapEx plans for FY20?
A: When it comes to CapEx, then we are investing around Rs1000 crores on energy saving schemes that are being implemented in all five plants, Nangal, Panipat, Bathinda and Vijaipur-I and Vijaipur-II. Apart from this, we are also investing in Ramagundam, where we have a joint-venture company and we have 26% stakes in the company and we have equity of around Rs400 crore in the plant.