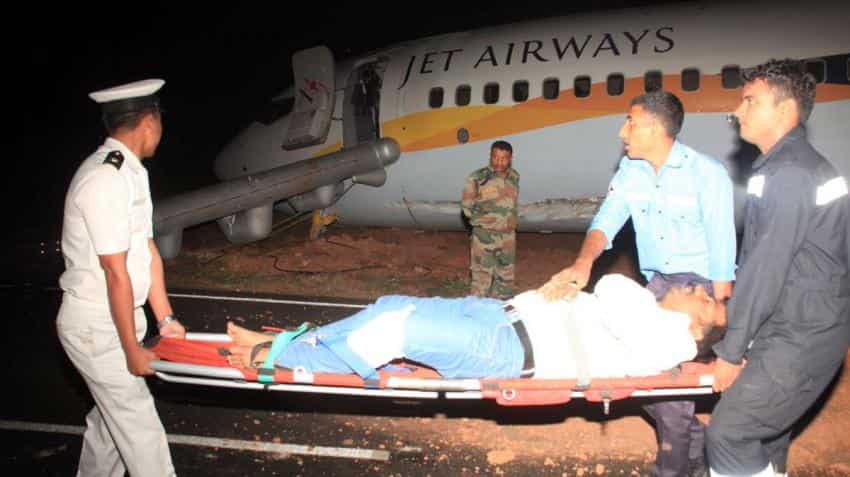 Though there were no casualties, 15 passengers suffered minor injuries while being evacuated from the plane. Image Source: Reuters

An unnamed pilot from the Jet Airways’ air force wrote an open letter to the people on Wednesday, explaining the incident that took place in Goa airport on December 27.

In an unfortunate event a Mumbai bound plane that was set to take off from Goa’s Dabolim airport, carrying 161 passengers, veered off the runway.

The pilot of the plane, in his defence said, “…it was nothing to do with aligning that brought this ill-fated crew to a halt just short the peripheral wall at Dabolim yesterday (December 27). How I wish I could explain concepts of asymmetric thrust to the number of people passing silent judgment and being armchair jurors.”

Though there were no casualties, 15 passengers suffered minor injuries while being evacuated.

Here is the full text of the open letter.

“Aviation is a strange profession. I love it to death, but the strange part is that if I meet my end in my line of work, it's most likely that I'll be blamed.

Sadly that won't make as good a headline as much as "pilot error", or "pilot veers off runway when aligning for takeoff".

In fact, it was nothing to do with aligning that brought this ill-fated crew to a halt just short the peripheral wall at Dabolim yesterday (December 27).

How I wish I could explain concepts of asymmetric thrust to the number of people passing silent judgment and being armchair jurors. How do I tell someone about how much thrust 27,000 odd pounds is? How do I reiterate what a reverser unlock is? How do I tell the person that the same 27,000 pounds is now in an opposite direction?

To be honest it's disgusting - flying this kind of passenger and taking responsibility for his life for however long it may be.

How do I explain not being able to see three taxiway lights in front of me to a crowd that says, "anyway you autoland in fog"? How?

It's at the brink of frustration that I'm writing this. Back in the day, an old grey instructor told me, "Son, in this world of civil aviation, its best to be a nameless faceless pilot who does his job and goes home!"

I probably didn't understand it then but now, more than ever, I totally understand. The sad part is it doesn't matter if it is a Cactus 1511 with Sully or the 9W aircraft.

Sadly, with technology improving in the home and workplace, the human has become the weak link. Sometimes one must note that the human is the strongest link. Without them shutting down the malfunctioning engine, the plane might have gone into the terminal, increasing the statistics of loss of life

As an appeal to the non-aviation public, believe that we as pilots love what we do and would never put anyone's life in jeopardy. We are sons, daughters, wives, husbands, parents, just like you. We haven't fallen from the realm of Asgard into the helm of these metal ships. It takes years of hard work to achieve it.

Media folk, this is an appeal to you: It's you who have sensationalised our profession with scandals, malpractices, and so on. Paint the right picture of pilots worldwide. Tell people that we are there to save lives, not take them. Make an honest effort to redeem your name when you're standing at heaven's gates, or you'll probably have the boatman remove you from the boat.

Educate the masses - who you manipulate to get more views - to the actual facts of thrust, lift, weight and drag. Tell them, from start to finish, what happens from takeoff to touchdown.

Do tell them that when they see the wind looping out of the window and the tip moving, there is a hand guiding this giant metal bird through the skies,” the letter read.