Mukesh Ambani, Lakshmi Mittal on Bloomberg Billionaires Top 100 Index; see who else made it

The RIL chairman’s wealth has grown by USD 9.3 billion as compared to the same period last year, but it declined by USD 2.3 billion year-to-date. The other four Indians who have made it to the list include ArcelorMittal CEO Lakshmi Mittal (51), Shapoorji Pallonji Group Chairman Pallonji Mistry (61), Wipro Chairman Azim Premji (66), and HCL Chairman Shiv Nadar (85), said a report. 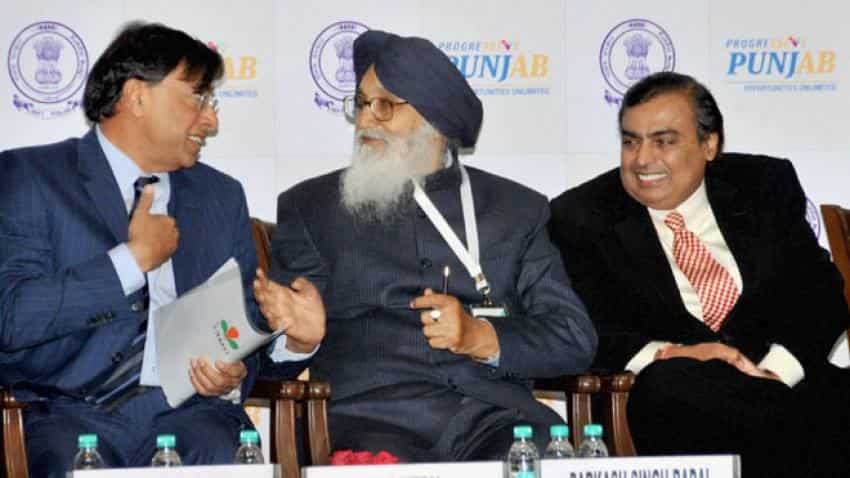 Reliance Industries (RIL) chairman and managing director Mukesh Ambani is Asia’s third-richest man with a net worth of USD 38 billion (about 2.47 lakh crore), while Alibaba's Jack Ma is the richest person in Asia with USD 46.3 billion net worth, followed by Tencent co-founder and CEO Pony Ma with USD 41.1 billion net worth, acording to the Bloomberg Billionaires Index. The Index is a daily ranking of the world’s richest people. Details about the calculations are provided in the net worth analysis on each billionaire’s profile page, and these figures are updated at the close of every trading day in New York.

The RIL chairman’s wealth has grown by USD 9.3 billion as compared to the same period last year, but it declined by USD 2.3 billion year-to-date. The other four Indians who have made it to the list include ArcelorMittal CEO Lakshmi Mittal (51), Shapoorji Pallonji Group Chairman Pallonji Mistry (61), Wipro Chairman Azim Premji (66), and HCL Chairman Shiv Nadar (85), said an ET Now report.

Amazon chief Jeff Bezos has reportedly dominated the index by securing the top rank with a net worth of $115 billion, while Bill Gates and Warren Buffett remained at second and third positions with a net worth of $89.4 billion and $83.9 billion respectively. Only two billionaires from Europe, including Amancio Ortega of Spain and Bernard Arnault of France, are among the world’s top 10 richest people.

Here are the five Indians billionaires who featured in the top 100 wealthiest people's list.

1-Mukeh Ambani is India's wealthiest man. He controls 40 per cent of Reliance Industries and is owner of the world’s largest oil refining complex. RIL chief is placed 19th in the 2018 Bloomberg Billionaires Index and is worth USD 38 billion. However, in terms of or year-to-date (YTD) change, he has lost a total of USD 2.30 billion, the data shared by the index showed.

2-Lakshmi Mittal is at the 51st spot. Mittal, who is the chairman of ArcelorMittal, the world’s biggest steelmaker, is worth USD 18.5 billion. He has managed to add USD 2.7 billion to his wealth from April 2 last year. ArcelorMittal, the Luxembourg-based company, is involved with mining, energy and refining operations in 60 countries, and had revenue worth USD 56.8 billion in the year 2016.

3-Pallonji Mistry is ranked at the 61st position in the index. With a net worth of $17.2 billion, he and his family owns 18.5 per cent of Tata Sons. Mistry has reportedly collected more than Rs 80,000 crore ($1.3 billion) in dividends through December 2017, according to company filings and an analysis of Bloomberg data.

4-Azim Premji, who is placed at the 66th position, is the chairman and largest shareholder of IT firm Wipro. Premji has seen his fortune grow from USD 14.1 billion to USD 16.6 billion as per April 3, 2018. He owns 56 per cent of the Bengaluru-based business after transferring more than USD 4 billion worth of shares to his foundation and private-equity fund PremjiInvest, which manages about USD 1 billion of his money.

5-Shiv Nadar is ranked 85th in the Bloomberg Billionaires Index. Nadar, who is the founder of HCL Technologies, managed to add about $748 million to his fortune this year, thereby becoming the only Indian billionaire in the top 100 to make profits this year. HCL Technologies had revenue of $7 billion in the year to March 31, 2017.