We are considered as a cost leader and most efficient player in the cement industry, says Deepak Khetrapal, MD and CEO, Orient Cement Limited, in a candid chat with Zee BUsiness. 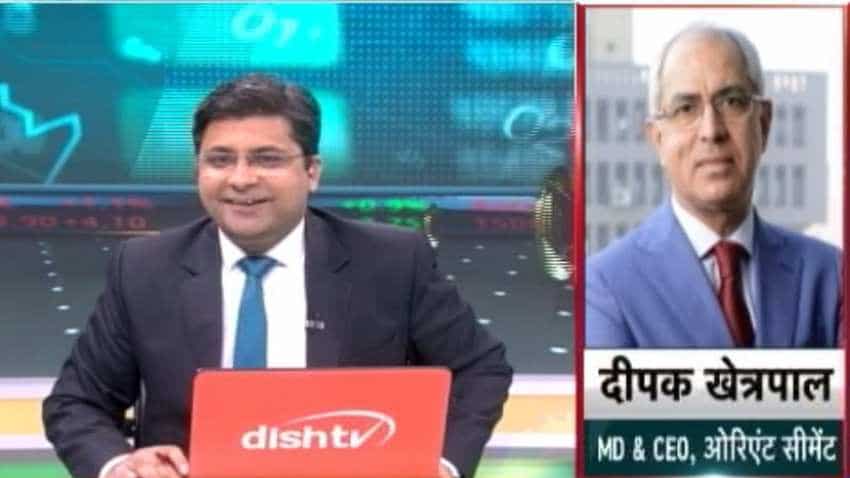 Deepak Khetrapal said low prices in markets we work maximum has reduced our profits when compared to the efforts that were made from our end. Image source: Zee Business
Written By: ZeeBiz WebTeam
Edited By: Arun Kumar Chaubey
RELATED NEWS

We are considered as a cost leader and most efficient player in the cement industry, says Deepak Khetrapal, Managing Director and CEO, Orient Cement Limited. In a candid chat with Dimpy Kalra, Mr Khetrapal said low prices in markets we work maximum has reduced our profits when compared to the efforts that were made from our end. Edited Excerpts:

Q: What were the extraordinary efforts behind a good result or was it due in your books and you were aware of it?
A: If you are following our company for a long time, then you would have known that making extraordinary efforts is the DNA and culture of our company. This is a reason that we are considered as the cost leader and most efficient player in the cement industry in terms of production of cement.  As you were asking about the exceptional efforts then yes, we always made an exceptional effort. And if you focus on the past 5-6 quarters except for Q4 of FY19, on the markets where we work more - like Maharashtra, Telangana and Karnataka - the prices were very low and that is something that reduced our profits as compared to the efforts that we were making.

We were expecting price recovery and reasonability for the products that are sold by us and we were benefitted from the price increase in February 2019 will always have its internal efforts despite the way market moves, up or down. Markings were good, the EBITDA doubled itself when compared to last year’s EBITDA and there is a percentage level increased in Profit After Tax (TAX), but our base was quite small. We would have been able to show volume growth in the case where the demand conditions of the market would have been better. General Elections, extreme heatwaves in April and May and shortage of water in several cities and districts led to a ban on construction and this is something that disappointed us internally because our volume remained almost 5-5-5.6% below the last year’s volume of the first quarter.

Q: Are you going to increase the cost of your products or will the older costs be used to adjust the balance sheets?
A: The prices will keep moving up and down in the commodity market as it is the rhythm of the market. There was a price decline for 5-6 quarters and saying that we were responsible for the same is completely wrong as the market conditions didn’t provide an option to sell the products at lower prices. However, the market conditions and dynamic has improved in past 5-6 months which has enabled the improvement. In a commodity market, one has to function in sync with the market and decisions are taken as we observe day-to-day, week-to-week market dynamics.

Questions regarding the prediction of prices were asked in July but I can only tell about the present and we’ll let you know about the future as we speak later. The demand and prices reduce in the monsoon quarter. There is a weakening of the prices in the first few weeks of July as compared to the Q1 of the southern markets of Andhra Pradesh and Telangana. There is some weakness in Maharashtra as well but not as worse as the southern markets. I can’t say where it will reach next week but will respond only after understanding the direction of the movement.