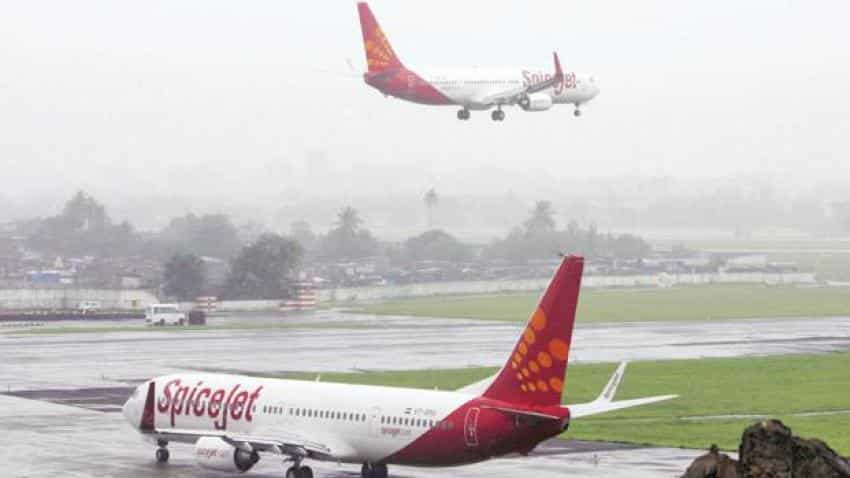 SpiceJet share price gained most, rocketing as much as 14.45 per cent to Rs 116.80. Image source: Reuters
Written By: ZeeBiz WebTeam
RELATED NEWS

Shares of airline companies such as Jet Airways, SpiceJet and InterGlobe Aviation (Indigo) are flying high on Monday thanks to a correction in global oil prices that are likely to help airlines reduce their operating cost. These aviation stocks rallied up to 14 per cent on the BSE.

The rally came after oil prices slumped on Monday, extending steep declines from Friday, as Saudi Arabia and Russia said they may increase supplies and as US production gains show no signs of abating.

Brent and WTI have fallen by 6.4 per cent and 9.1 per cent respectively from peaks touched earlier in May.

Notably, oil prices had gone on a rising spree, surpassing $80 per barrel last week. A surge in oil prices affect airlines' profit margin as air turbine fuel (ATF) constitutes about 40 per cent of an airline's operating cost. Since January 2017-May 2018, the rise in global crude oil prices have pushed ATF cost by 40 per cent.

Meanwhile, Civil Aviation Ministry recently urged the Finance Ministry to bring the air turbine fuel (ATF) under the ambit of GST to contain the rise in jet fuel prices.

Currently, state levies add anywhere from 2 to 30 per cent extra on the sale of jet fuel. Under the GST regime the cost is expected to come down substantially.

However, the decision to bring ATF under the GST ambit will depend upon the Finance Ministry as the same will be required to be mooted by it in the GST Council.

If passed, then the airline sector can expect to get a relief of more than Rs 3,000 crore under the 'input credit' model of the GST, according to IANS.