The Israeli company said the loss of the satellite would have a significant impact, with its equity expected to decline by $30 million to $123 million. 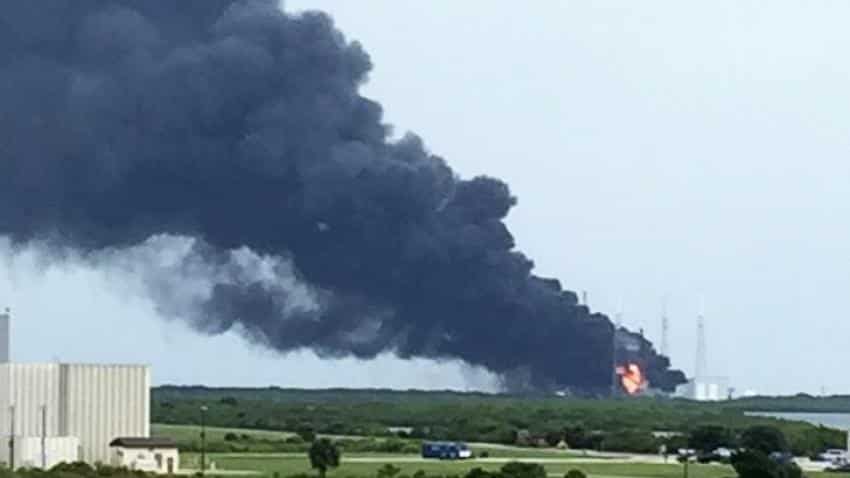 An explosion on the launch site of a SpaceX Falcon 9 rocket is shown in Cape Canaveral, Florida, U.S. September 1, 2016. Source: Reuters
Written By: Reuters
RELATED NEWS

Reusable rockets: How ISRO vs Musk's SpaceX stack up

SpaceX; first ever cargo ship from space to return back to earth

Israel's Space Communication Ltd said on Sunday it could seek $50 million or a free flight from Elon Musk`s SpaceX after a Spacecom communications satellite was destroyed last week by an explosion at SpaceX's Florida launch site.

Officials of the Israeli company said in a conference call with reporters Sunday that Spacecom also could collect $205 million from Israel Aerospace Industries, which built the AMOS-6 satellite.

SpaceX said in an email to Reuters that it does not disclose contract or insurance terms. The company is not public, and it has not said what insurance it had for the rocket or to cover launch pad damages beyond what was required by the Federal Aviation Administration, which oversees commercial U.S. launches, for liability and damage to government property.

SpaceX has more than 70 missions on its manifest, worth more than $10 billion, for commercial and government customers.

The space launch company is one of three major transportation and energy enterprises Musk leads. The others are electric car maker Tesla Motors Inc and SolarCity Corp, and Musk faces separate challenges at each of those money losing companies.

Spacecom has been hit hard in the aftermath of the Thursday explosion that destroyed the SpaceX Falcon 9 rocket and its payload. The Israeli company said the loss of the satellite would have a significant impact, with its equity expected to decline by $30 million to $123 million.

Spacecom shares dropped 9% on Thursday, with the explosion occurring late in the last trading day of the week. Trading in the shares was suspended on Sunday morning, and the stock plummeted another 34% when trading resumed.

In a conference call with reporters, Spacecom`s general counsel Gil Lotan said it was too early to say if the company’s planned merger with Beijing Xinwei Technology Group (600485.SS) would proceed.

Xinwei last month agreed to buy Spacecom for $285 million, saying the deal was contingent on the successful launch and operation of Spacecom`s AMOS-6 satellite.

"We hope to continue fruitful communications with the prospective buyer," Lotan said.

Xinwei officials on Monday declined to comment on whether the incident would impact the terms of the deal.

The firm said in a statement on Friday it was in close communication with Spacecom about how the incident would impact the merger. It added the accident would not impact its broader strategy to establish an integrated space information network.

Cause unknown
AMOS-6 was to be used by a number of key clients, including Facebook and Eutelsat Communications which leased the satellite’s broadband services to expand internet access in Africa. Both firms are pursuing other options, the companies said in separate statements after Thursday's accident.

The cause of the accident is under investigation. Neither SpaceX, nor the FAA which is overseeing the investigation, have said how much damage the explosion caused at SpaceX`s primary launch site at Cape Canaveral Air Force Station in Florida.

SpaceX said on Friday that it would shift flights to a second launch site in Florida, which is nearing completion and which was last used to launch NASA's space shuttles.

Thursday`s accident, which occurred as the company was fueling its rocket as part of a routine prelaunch test firing, was the second failed mission for Musk`s space company in 14 months. In June 2015, a

Falcon 9 rocket exploded about two minutes after liftoff from Florida, destroying a load of cargo headed to the International Space Station.

SpaceX returned to flight in December and since then has flown nine times, all successfully. It was scheduled to fly for the 29th time on Saturday. SpaceX declined to comment about what impact Thursday`s accident would have on its schedule.

Reusable rockets: How ISRO vs Musk's SpaceX stack up

SpaceX; first ever cargo ship from space to return back to earth