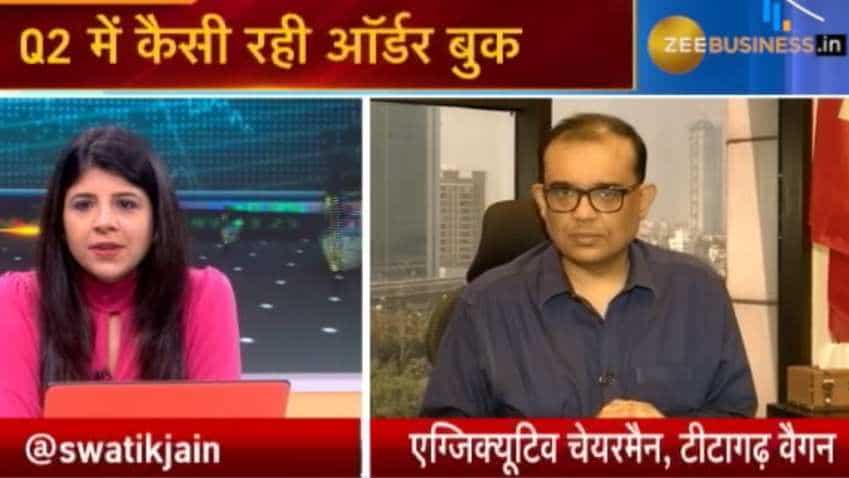 On part of Railway Stocking Programme (RSP) wagons, we have asked railways to relook into the prices of wheelsets, which was increased suddenly, says Jagdish Prasad Chowdhary, Executive Chairman, Titagarh Wagons. Chowdhary during an interview with Zee Business’s Swati Khandelwal said, " Titagarh Wagons has a long-term debt of about Rs200-250 crores in the Indian operations". Edited Excerpts:

Second quarter numbers were quite good and was driven by strong execution. Take us through the highlights of the quarter?
In the last two years, our focus was on building the order book and have achieved it to some extent. So, our consolidated order book has now reached the mark of around Rs5.50 thousand crores, if the Indian and overseas operations are taken into consideration. However, our focus has shifted towards steady execution in the last 2-3 quarters and our standalone execution stood at around Rs 300 crore in the last quarter. And, we have an endeavour to maintain this execution trend in the future as well. On the other hand, when it comes to our new business lines like metro coach order then we would like to get prepared for its execution in terms of designing and prototyping. And, we are focusing on recognizing it either as execution or revenue.

There are some delays in the delivery of wagons to railways due to availability of wheelsets. Have those been resolved, if yes, then how do you see its progress ahead? You are also importing wheelsets, will this hurt margins?
As far as railway wagon execution is concerned, wheelsets have been a big problem on two accounts (i) availability of wheelsets from Rail Wheel Factory (RWF) and (ii) cost of wheelsets. A railway notification of 2016 barred us from importing the wheelsets to the private wagons, however, it was corrected a month back. And, now we have been owed to import wheelsets for the private wagons and non-railway wagons that is been created at our place. Interestingly, those wheelsets have started coming and are cheaper and their deliveries are easier to get.

When it comes to railway stocking programme (RSP) wagons then we have asked railways to relook into the wheelsets prices, which was increased suddenly. We feel that the Railway Wheel Factory (RWF) is a monopolistic or single supplier of the wheelsets and that's why it must reconsider the said price hike. So, the process is on at present and will be finalized in the next few days. Their supply rate is concerned then there was some improvement in it in October but there is a problem in November. But, it has been said that the axel that is imported by them will reach to them in December, which means the problem of availability of wheelsets will come to an end.

What is an update on progress on execution of Pune Metro order? What margins are being targeted from the order and are you bidding for any other metro orders?
First stage of execution of the Pune Metro that includes designing and prototyping is happening in Italy and we have started our work on both. On the second hand, the CapEx work of creating the manufacturing facility by upgrading our existing facility has started. Its prototype will be supplied at the beginning of 2021 and the bulk production will be started somewhere in the middle of 2021 (calendar year). The whole purpose of entering into metro business is to bid for all the potential metro projects that will come up in India. For instance, the groundbreaking ceremony of Kanpur metro took place last week, so we are expecting that will get its tender and then we are expecting for Bhopal, Indore and Agra. So, in line to the government's resolution that 50 new metros will be constructed, we are expecting many new metro projects will come into the pipeline and with our credentials, we will be bidding for more of them.

What is the current order book status and what is your outlook on future order inflow? Do you have L1 (lowest bidder) for any order?
There is no ongoing tender in the metro where we have a bid. However, we have received an order of about Rs1,150-1,200 crore in Pune metro and will further bid for new tenders that will come out in future. So as of now, there is no tender that is in the pipeline in which we have participated.

And anything in case of railway coach?
No tender has come from the railways. But, railways has said that it will start coach procurement from private sector once again and that's why in our representation we have said that the coach manufacturing capacity of the private sector lying idle, so, railways, which consider only its production unit like ICF, RCF and MCF should also take private players like BHEL, BEML and ours - that have supplied coaches to EMU (Electrical Multiple Unit) and MEMU (Mainline Electrical Multiple Unit) for several years - into consideration and allow us to participate in the tenders. And, we understand that the railway is seriously considering that. Besides, we are also engaged in propulsion because our Italian subsidiary makes its propulsion and that's why we are very keen to be into propulsion business. A few months back, we also received a development order, which is in the designing stage at present. On the front, the railways have taken a bold step in which vendor neutrality and other specification has been implemented for train-18 propulsion. This will give birth to widespread competition from companies like us and we will participate in it. Opening of the segment is a commendable step of railways as earlier the propulsion business was restricted within two-three players. I feel, this in itself is going to be a big opportunity for companies like us.

There is a big thrust on wagon procurement from railways? What's the incremental chunk that Titagarh could get from that? And, how has the performance been for your unit Firema and other international business?
Indian Railways is one among the world's four largest railway networks. But, if we look at wagon holdings, then about 2 lakh 80 thousand wagons are available with Indian Railways, and when compared to America and China then it is less than even one-fourth wagons that are available with those countries. So, I feel that today with all the pollution consciousness and cost consciousness, the freight that has moved to roadways should be brought back to railways. This government has invested a lot in railways infrastructure creation in the last 5-6 years. It didn't have any doubts while increasing the debt of railways as they had a willingness to expand its capacity. Now, the only way to utilize that capacity is to add more traffic to railways and for that purpose, they will have to buy more wagons. But, the recent blip in the economic scenario or traffic loading is a temporary blip and we would like to request railways to keep the wagon procurement process in an active mode during this blip to make sure that they reap the benefits of the opportunity that will be created when economic cycle will turn in a positive direction. Even the Minister of Railways in his speeches and programmes has said that railways will be adding about 1-1.50 lakh wagons to the existing stock in the next 4-5 years. I completely agree with it and feel this is a visionary statement. If we have a look at railways economics then their variable cost is just 30% while the remaining 70% is fixed cost. So, the other way to increase the bottom line is to increase the revenue and that can happen only if they have more and more rolling stakes available. This is why I feel that wagon procurement outlook will be good for railways and Titagarh being the market leader would thrive to continue this position.

What is your CapEx for remaining part of FY20 and what are your debt levels at present?
Our CapEx is not so big. Apart from the metro coach manufacturing facility that will not require a big capacity as we have prepared ourselves a lot in the last 3-4 years. So, the CapEx that will be used will come from the internal accruals. Besides, we have increased wagon building capacity in the last 4-5 years, which was a null period, has turned up to be an advantageous thing for us. So, I don't think that in the next year we have a very large CapEx that can be categorized into routine or maintenance capacity. As far as debt is concerned then we have long-term debt of about Rs200-250 crore in the Indian operations including Indian subsidiaries and a working capital of Rs150-175 crore that keeps rotating. And, we have an endeavour of liquidating this debt of Rs200-250 crore by different means including internal accruals. As far as the overseas subsidiary is concerned then we have a debt of around 50 million Euro and we are trying to keep it under control.