Privatisation is not a remedy, which can make an airline profitable or efficient, and shuttering of Jet Airways and Kingfisher is a case in point, a senior Air India employees union official said Sunday 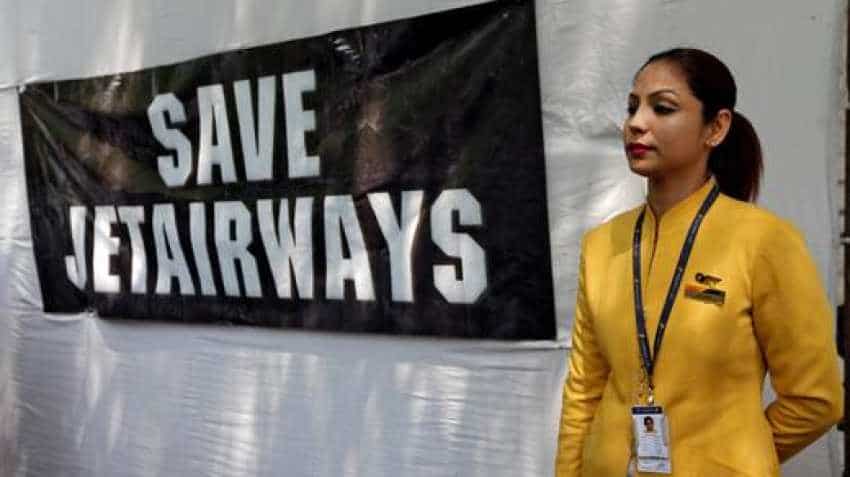 A flight steward of Jet Airways stands next to a banner during a protest demanding to "save Jet Airways" in New Delhi,... April 18, 2019. Image: Reuters
Written By: Agencies
RELATED NEWS

Privatisation is not a remedy, which can make an airline profitable or efficient, and shuttering of Jet Airways and Kingfisher is a case in point, a senior Air India employees union official said Sunday even as he urged the government to reconsider its plans to de-nationalise the flag carrier, which are currently on hold. Supporting the 20,000 employees of the grounded Jet Airways, the union official said that the present policies of the government need to be relooked as they have only lead to a crisis in the industry and jobs of thousands of people are at stake. Weighted down by huge debt, majorly from the public sector banks, Kingfisher went belly-up in 2012.

Jet Airways, which has a debt of Rs 8,500 crore, mostly from the government-run banks, ceased operations last Wednesday due to paucity of cash.

The abrupt closure of Jet Airways operations, for the time being, has put jobs of its over 20,000 employees. Moreover, as many as six airlines have closed down in the last five years. "First it was Kingfisher which folded up, and now its Jet Airways, which has stopped operations, albeit for the time being. The votaries of the privatisation, both in the government and outside, need to understand that denationalisation alone can't bring profitability and efficiency. Had it been so, the two private airlines would not have gone bust," said an Air Corporation Employees Union (ACEU) senior official.

Stating that the foremost reason for the current crisis in the aviation industry is the government's "reliance" on the private sector in achieving its ambitious Vision 2040, which has projected the country's air passenger traffic to grow to 1.1 billion per year by 2040, the union official said, "the industry is not doing well from the vision document point of view as the growth is not sustainable, healthy and even".

Calling the government to reconsider its plans of privatising Air India, which are put on the backburner for the time being, the ACEU official said even in the present crisis when Jet Airways passengers are stranded across airports globally, it is the national carrier which has come to the rescue of the passengers by announcing special fares for such passengers. "The government can't expect such a gesture from private airlines," he said.

"If the present crisis is allowed to continue, it will lead to an unprecedented crisis in the industry leading to more and more employees being thrown out of employment. A mere glance of problems indicate that there is something seriously wrong with the policy direction," he added.

There is also a need to put brakes on 'open sky policy' besides strict enforcement of bilateral to make the business of domestic companies, including of Air India, viable, he said.

Internal differences of opinion on employees taking over the management of Jet Airways did not permit pursuing the idea, but employees are ready to fully cooperate with any new investor for turning around the the financially crippled company, a senior official of the National Aviators Guild (NAG) said on Sunday. The NAG is the union of Jet Airways` pilots.

"We had internally discussed the issue of employee management but there were differing views, and so decided not to pursue the matter," NAG Vice-President Asim Vallani told IANS over the phone. When queried whether the employees volunteered for a pay cut in order turn the company around, Vallani said: "We are ready to work with the new investor and extend cooperation for the revival of the airline."

He said that their meeting on Saturday with Finance Minister Arun Jaitley went off well. "The Minister did ask us why banks should lend more money to the airline. We told him there is adequate security for the loan. About Rs 980 crore is needed for the airline to start operations again. We asked him for Rs 170 crore towards employee salaries," Vallani said.

According to the union official, Jaitley was requested to ensure that slots in the possession of Jet Airways are not given away to any other airline, to expedite the bidding process, and to request the state-run Indian Oil Corp to extend six months credit for fuel supplies as was done earlier for SpiceJet.