How Potterheads were reunited for release of ‘The Cursed Child’ 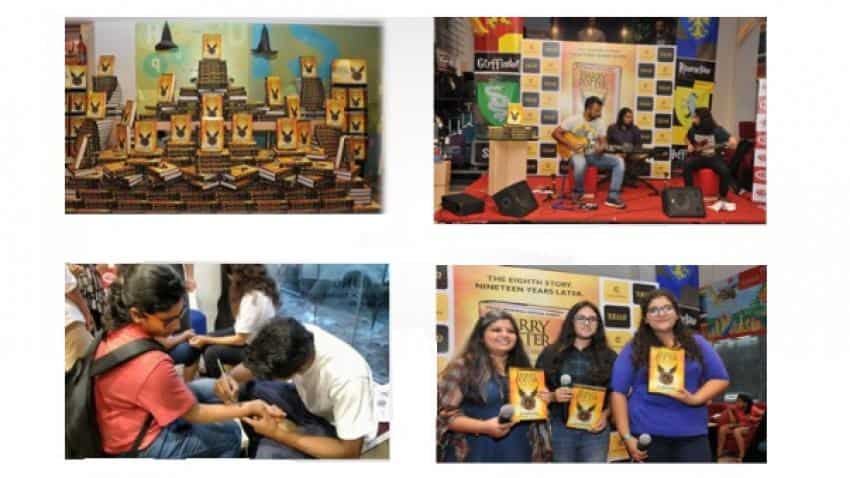 The book was launched on July 31 along with the premiere of the play on the same day in London. Photo: Crosswords
RELATED NEWS

Talks of Hogwarts, owls delivering mail, spells, goblins and ghosts, were all a thing of the past up until J K Rowling and two other authors decided to bring the magic back this year.

The eighth Harry Potter book and the last one in the series, was back after nearly a decade with 'Harry Potter and the Cursed Child'.

Online and offline bookstore were bustling with exciting offers to promote the latest book which is based on an original story by J K Rowling, Jack Thorne and John Tiffany.

The book is based on the script of the play by the same name, created by Jack Thorne. It is the first of its kind which was presented on the stage first.

Zee Business spoke to Crossword which has 12 stores across the country, including Mumbai, Chennai, Bengaluru, Hyderabad and Kolkata.

Crossword pulled out all stops to promote the new Harry Potter book, to bring the HP magic back for his fans.

The book was launched on July 31 along with the premiere of the play on the same day in London. Crossword had a 50% off on pre-bookings starting from May 18 up to the D-day.

The bookstore held several promotional activities across their outlets in the country.

“Exclusive Harry Potter Menu from Café Moshe’s was designed for the launch day which contributed towards the sale of the day of approximately Rs 95,000,” Crosswords said in a comment.

Potterheads could also pick up Harry Potter books and Box sets with a flat 20% discount and other Children's Books at a 50% discount on the launch date.

The discount on other children's books was only at the Kemps Corner store.

A Harry Potter brunch was organized by ‘Courtyard by Marriott.’ The feast commenced on August 14 and extended on select dates right up till August 21, for Potter fans everywhere and starts at Rs 1,695 (non-alcoholic) and Rs 1,945 (alcoholic).

The invite for the brunch stated, “As you enter the venue, you may choose to be seated at the long Gryffindor table (Hogwarts mess style community dining table) or the regular restaurant style seating. Tickets to the 93/4 platform will be handed at the venue.”

Marriott group said in a Facebook post that the inspiration for these events stemmed from the food served in the Potter stories including desserts like cauldron cakes, the magical accessories and mythical creatures of Rowling’s creations.

The Potter fever did not stop there. Events were conducted all over India to celebrate the latest addition to the Potter saga.

Other events by groups like Antisocial Hauz Khas who attempted to recreate the magic with events like ‘The Magic of Harry Potter: A Literature and Writing Workshop,’ in New Delhi.

This was a series of ten workshops where guest speakers discussed themes and nuances in Harry Potter, followed by creative writing workshops.

Trilogy hosted a ‘Harry Potter and JK Rowling,’ party on the launch of the book – July 31 in Mumbai.

The Hive in Mumbai also hosted ‘The Harry Potter Extravaganza’ which was on July 28 which consisted of quizzes and dress up themes from the contest.

Potter fans in Chennai celebrated with The ilovereadin' Library along with Savera Hotel’s The Brew Room, which organized a brunch and giveaways included a copy of The cursed child.

Bangalore Potterheads had to pose for portraits along with participating in quizzes held at Lightroom Bookstores.

Oxford Bookstore in Kolkata celebrated the release of the book on July 30 and 31, with events that included quizzes, blogging contests among others.