It was all down hill from 2000 for Yahoo as one wrong decision after another continued to haunt the company. 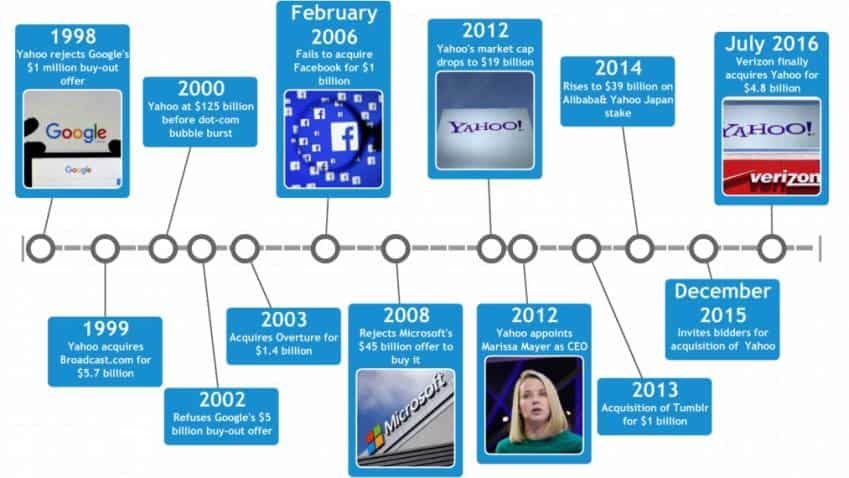 One of the most iconic old horses of the dot com boom has ended its reign.

Yahoo! has decided give itself up to telecom major Verizon for $4.8 billion.

Verizon on Monday announced the acquisition of beleaguered web company Yahoo Inc for $4.8 billion. The fate of the company was finally sealed after months of speculation and struggle to find a buyer with mounting pressure from investors including Starboard Value LP.

That Yahoo! will be sold off was known for a while. But what has shocked and awed people is the price at which the deal has been stuck.

Here's how the story unfolded.

It was all down hill from 2000 for Yahoo as one wrong decision after another continued to haunt the company.

Yahoo! had the opportunity to buy Google for a paltry $1 million in 1998.

Today, Google's parent company Alphabet is valued at over $500 billion.

The opportunity came back in 2002 but Google's $5 billion price was too high for Yahoo!.

This was pitted as the worst acquisition deals at the time, according to Econsultancy.com.

Yahoo!, in 2003, bought pay-per-click company called Overture for $1.4 billion. It lost that race to Google AdWords.

Even acquisition of Flickr and Delicious failed to save the company's plummeting trajectory.

Reports suggest that in 2006, the company came very close to buying Facebook for $1 billion. The deal didn't go through.

The company's value dropped to approximately $45 billion in February 2008 when Microsoft offered to buy Yahoo's outstanding shares and thereby getting a hold of 61% stake in the company. However, it refused to take the offer.

This was when Yahoo! brought on Marissa Mayer as the CEO from Google, to save the ship from sinking.

While Mayer's appointment initially seemed to have worked as Yahoo's value in 2014 increased to $39 billion, however on taking a closer look it was the gains from its stake in Alibaba and Yahoo Japan that resulted in the hike.

She, too, turned to acquisitions and bought Tumblr for over $1 billion in 2013. The company, earlier this year, wrote-down most of this money.

Following the sale, Yahoo will be left with about $41 billion it invested in the Chinese e-commerce company Alibaba as well as Yahoo Japan.