Aluminium business performance was strong in the first quarter, while copper business was hit due to closure of smelters in Dahej, Gujarat, says Satish Pai, Managing Director, Hindalco. During an interview with Zee Business Executive Editor Swati Khandelwal,, Mr Pai said, Copper should be back to normal levels in the second quarter 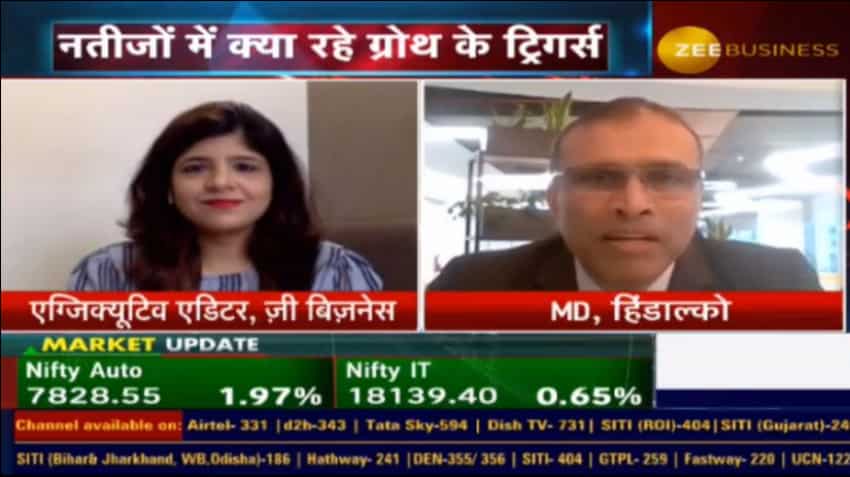 The big acquisition of Aleris of $ 2.8 billion was closed on April 14, 2020, in the middle of the COVID crisis. That’s why the net debt to EBITDA has gone to 3.8 in June-end from 3.6 in March-end, Satish Pai said
Written By: Jitesh Kumar Jha
Edited By: ZeeBiz WebTeam
RELATED NEWS

Aluminium business performance was strong in the first quarter, while copper business was hit due to closure of smelters in Dahej, Gujarat, says Satish Pai, Managing Director, Hindalco. During an interview with Swati Khandelwal, Zee Business, Mr Pai said, Copper should be back to normal levels in the second quarter. Edited Excerpts:

Q: Numbers were weal as per street estimates but the performance from the Aluminium segment came as a surprise from EBITDA point of view which grew from Rs 853 to Rs 856 crore. What led to this excellent performance?

A: Aluminium performance was quite strong in the first quarter due to (i) the production of the smelter and refinery ran at 90% capacity, this the output was maintained and (ii) our input cost was low, especially coal cost went down. So, our cost of production compared to Q4FY20 was 6% down. As a combination of sustained operation with volumes being maintained and reduced cost of production, the EBITDA margin came at 19.3% due to which EBITDA stood at Rs 856 crore, which was slightly better than the Q1 of last year.

Q: Lot of pain was seen in the Copper segment as EBITDA fell from Rs 307 crore to Rs 37 crore, i.e. almost 88% drop on a YoY basis. What was/were the main reason for this massive fall? Also, tell us about your outlook for the segment?

A: The Copper result was adversely impacted because copper smelters located in Dahej, Gujarat, were closed in April and May due to COVID. Thus, the smelters were closed for half time in the quarter and were opened in the middle of May. Thus, volumes were down by 50%, which affected its result. Both the smelters are running at full capacity since June. Copper should be back to normal levels in the second quarter.

Q: Standalone margins rose from 7.14% to 7.7%. Tell us about the prices and realizations during the quarter?

A: The margin should be split into Aluminium and Copper. Largely the standalone margin grew because there was a growth in the aluminium margin. As I said earlier, the Aluminium margin grew because the volumes were high and the cost of production was low. Copper margins deteriorated. But as a combination, the margins were up largely because of the aluminium.

Q: Update us about the debt levels? What is your futuristic outlook about it and how will you reduce it?

A: The big acquisition of Aleris of $ 2.8 billion was closed on April 14, 2020, in the middle of the COVID crisis. That’s why the net debt to EBITDA has gone to 3.8 in June-end from 3.6 in March-end., as a result of $2.8 billion of debt coming in to finance the acquisition of Aleris. We have committed that to bring down this 3.8 net debt to EBITDA level below 3 in the next two years and we still stand behind it.

Q: Now I would like to talk Novelis. How were the sales of beverage cans? Also, talk about the capacity at which you are operating at present and can you provide a timeline by which it will reach to the pre-COVID levels?

A: Beverage cans are very resilient as consumption of the cans was quite high during the COVID due to consumption at homes. NOVELIS whose 60% business came from Aluminium cans was hard during the COVID crisis. So Novelis can be more or less at the same levels. The automotive came down by 50% because all the automotive plants were shut down in Europe and the US in April and May. Since the month of June and July, they have come to the pre-COVID levels.

Q: Value-added products/ non-LME have helped in beating peers in terms of growth and margin. What was the contribution of the non-LME products and how do you want to leverage it?

A: Right now, about 75-80% EBITDA of Hindalco is non-LME linked. With the inclusion of Aleris, this percentage will go higher. So only the aluminium business in India is now linked to LME and the rest of the business is not related to LME. We have a long term plan in which more than 80% of our EBITDA will be non-LME linked and after the acquisition of Aleris, we are more or less there.

Q: Let’s talk about the Aleris acquisition. You have received the necessary approvals in April but what is the update on Lewisport and Duffel disinvestments? Are they on track and what can be the timelines for them?

A: Duffel is more or less near the end and I believe that its sale process will be completed in this quarter. Lewisport has just started and a lot of interest has been shown on it. We want to complete its divestment process at the earliest.