Pushan Mahapatra, MD & CEO, SBI General Insurance, in an exclusive interview with Zee Business, said the SBI has diluted four per cent stake in its subsidiary — SBI General Insurance Company Ltd — for Rs 482 crore in a transaction that will value the latter at over Rs 12,000 crore. 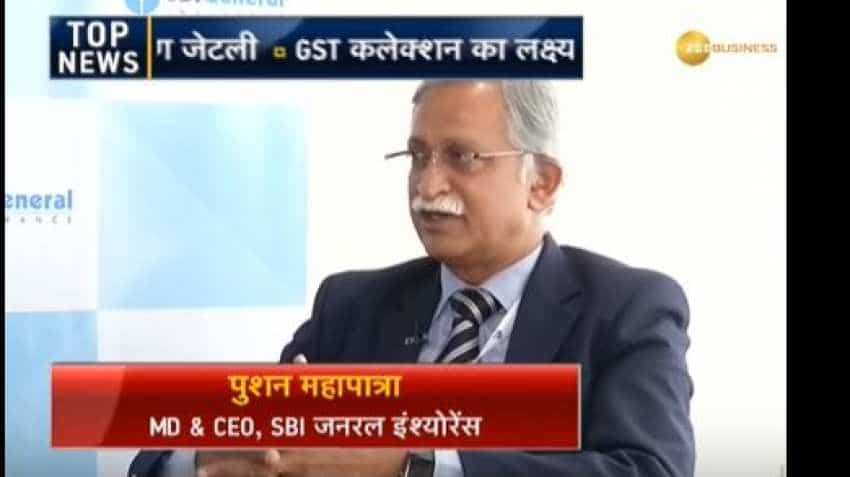 SBI has already stated that it will be taking at least two of its companies on the public route in the financial year 2019-20, said Pushan Mahapatra. Image source: Zee Business
Written By: ZeeBiz WebTeam
RELATED NEWS

Pushan Mahapatra, MD & CEO, SBI General Insurance, in an exclusive interview with Anurag Shah, Zee Business, said, the SBI has diluted four per cent stake in its subsidiary — SBI General Insurance Company Ltd — for Rs 482 crore in a transaction that will value the latter at over Rs 12,000 crore. Here are the edited excerpts:

Q: First of all, I would like to know the enterprise value of the company after this disinvestment of 4 per cent stakes?
A: Transaction of the stake sale has been completed. SBI has diluted 4 per cent of its holding in the company from existing 74 per cent to two strategical investors, Axis AIF (alternative investment fund) and  PI Opportunities Fund-I, an AIF of Premji Invest. Axis AIF has purchased 1.65 per cent and PI Opportunities Fund-I will acquire 2.35 per cent from the SBI. The consideration value of this 4 per cent stake stands around Rs 482 crore and on the basis of this transaction, the company's value is at around Rs 12,000 crore, which makes SBI General Insurance stand near the best-listed companies. The transaction has helped us in discovering the valuation of the company.

Q: Should we consider that the Company is very close to the launch of its IPO?
A: SBI has already stated that it will be taking at least two of its companies on the public route in the financial year 2019-20. And this launch will also depend on the market conditions. It can be made public in next eight to fifteen months.

Q: Do you think that the modification in the rules of the Motor Insurance Act, like offering a compulsory personal accident cover of Rs 15 lakh through a third party, is going to be beneficial for general insurance companies or it is going to increase the liability of the insurer?
A: It will be tough to say anything related to it, right now. Third-party liability is stable but the court's ruling and amendment to the Motor Vehicle Act may have an effect on us. However, there are certainly positive things in it, like the deadline for notification, that will end the problem of notification by the third party by reducing it to six months from existing 3-4 years. This reduction will bring an improvement in profitability. Secondly, it will also reduce the period of settlement as well as the interest that we are supposed to pay for the period. We are expecting that it is going to be a positive one for us.

Q: Do you think that there is a notional impact in the two-wheeler segment as their premium amount will directly go up from Rs 1,000-1,200 to up to about Rs 10,000?
A: See, affordability is a matter of concern but it doesn't mean that production of new vehicles will stop and I feel that the funding for insurance will be increased by the banks and will be included in the loan itself. There can be a marginal increase in the EMIs with the inclusion of the insurance sum in the loans. This is a way to manage affordability.

Q: Health insurance scheme, Ayushman Bharat Yojana, has been launched but it was seen that the health insurance companies were not interested in being a part of the scheme. Can you let us know about the reason that would have forced them to not associate themselves with the scheme?
A: There should be an adequacy of pricing while taking a risk as at end of the day you are using shareholders money to run your business. Therefore, a reasonable amount of premium should be given but the rates that propped up during the bidding process failed in building a business sense for us and same was the case across the industry. In addition, maximum states chose to go for the trust model available under the scheme for adoption of the scheme. In addition, maximum out of the remaining states chose the hybrid model for adoption of the scheme and very few states, who are too small in size, went for the direct insurance path.

But, I will like to say that it is a good scheme and expect that people will participate in it. I feel states may allow the insurance companies to run the scheme.

Q: Do you think that capping of several items by NPPA has reduced the number of claims or its effect will be visible after some time?
A: It will take some time as claims after made with a lag and that's why its effects will be visible with time.

Q: IRDA chairman in his last speech in Mumbai said that he has asked insurance firms to come out and work on the sandbox regulation. How do you see it? Is it going to be a big one for General Insurance companies?
A: It is an important initiative of IRDA and we can try some new and innovative products under it. But, there is no guarantee of success in every innovation. Companies fear from innovating things due to the absence of sandbox environment in the country. The platform announced earlier will provide an opportunity for them to step ahead and test innovative products.

Q: General insurance is turning hyper-competitive nowadays. Can you let us know plans to increase your business? Also, inform about the verticals of focus?

A: Competition will always be there in the market and we can't be out of it. But under penetration of insurance will help us in maintaining a steady growth in the segment.

In addition, health, home and SME are the three areas that will drive our growth trajectory in the segment. Only 3 per cent of homes are protected in India at present. Calamities in form of floods, cyclones and earthquakes are something that can boost the sector as there a need to protect the houses from these calamities. For instance, we have received 1,200 house claims in Kerala at present and this indicates the absence of insurance in the section. That's why we expect that home protection of both structure and its contents is an essential thing and there is a large market to grow.

The third category, SME, is very unprotected due to the absence of insurance in certain units. Secondly, certain units are under-insured. SME is a vulnerable segment due to the small capital base, the absence of promoters and limited access to capital. Actually, they are dependent on their cash flow and any disruption of cash flow may bring a challenge to make a comeback. This is a reason that SME segment is going to be an area of focus for this year. Interestingly, we have also created a special vertical with SME specialists who have an understanding of SME insurance and are qualified to provide technical support to the segment. The vertical will concentrate only on the SMEs.