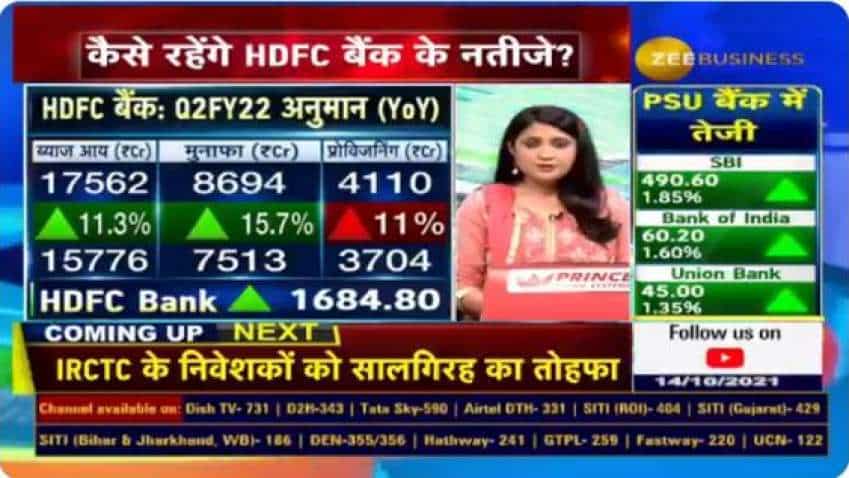 The profits for the reporting quarter are estimated at Rs 8694 cr, which will be up by 15.7 per cent YoY against Q2FY22 net profits at Rs 7513 cr
Written By: ZeeBiz WebTeam
Edited By: Preeti Verma
RELATED NEWS

Asher said that the HDFC Bank is expected to post strong results. The loan growth reported by the company was strong and is expected to be around 15 per cent on the Year-on-Year (YoY) basis.

The net interest income (NII) is expected to see a significant uptick at Rs 17,562 cr, she said. It will be 11.3 per cent higher on the YoY basis as against Rs 15,776 cr reported during the corresponding period in FY21.

Another important point that must be noted is its stake sale in Central Depository Services (India) Ltd (CDSL) which will give a fillip to its income from other sources, she added.

The bank is also likely to get around Rs 150 cr in recovery amount from DHFL.

The profitability is expected to increase on strong loan growth and other income, she further said.

The bank will also benefit from growth in its retail loan segment, Asher said.

On the negative side, the slippages and restructuring could slightly go up during the reporting quarter, she pointed out.

At 1.54 per cent, asset quality is likely to remain stable and up from 1.47 per cent. Net NPA (Non Performing Assets) will also likely be stable at 0.5 per cent.

The street must watch out for numbers related to loan restructuring and slippages. The commentary on loan growth will also be vital, she further said. But, overall expect a strong show, she said.

Shares of HDFC Bank today ended at Rs 1687 on the NSE, up 2.9 per cent from the Wednesday closing price.