Gas trading hubs will be functional by end of 2018: Dharmendra Pradhan to Zee Business

Dharmendra Pradhan said events like IEF in India is a big thing. During our discussions with the international delegates from oil producing nations, international organisations and CEOs, experts, who participated in the event, we made them all aware about our energy demand and capacity as well as the appetite of the market, he said. 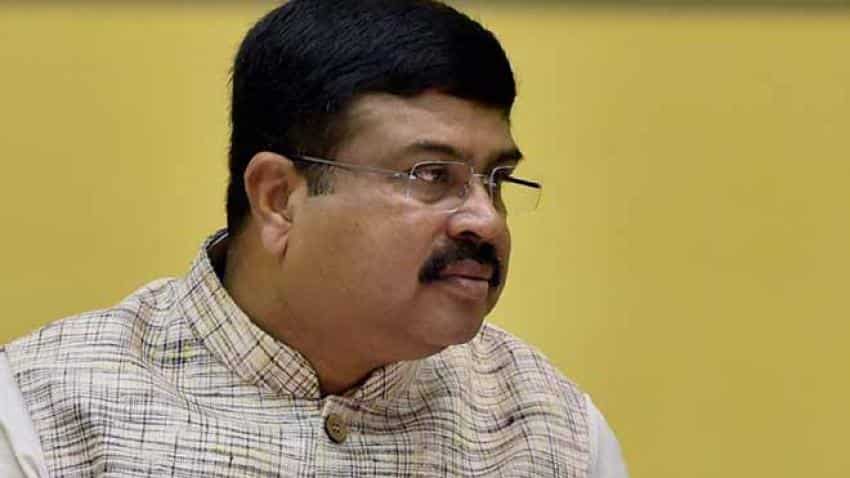 Dharmendra Pradhan revealed that some 60-70 mmscmd gas is produced domestically and another 60-70 mmscmd is imported. Image source: PTI

Dharmendra Pradhan, Union Minister for Petroleum and Natural Gas, in a candid talk with Zee Business's Prakash Priyadrshi on the sidelines of the International Energy Forum 16 (IEF 16), said the gas trading hubs, which will control the gas pricing mechanism across the nation, will be functional by end of the year 2018. Pradhan also revealed that some 60-70 mmscmd gas is produced domestically and another 60-70 mmscmd is imported. He added, the rate and tax mechanism of the two sources are completely different and this difference can be controlled by bringing a competitive uniformity in their pricing. Here are edited excerpts from a comprehensive interview:

Q: The mega event like International Energy Forum (IEF) has just concluded. What were the takeaways from the event at least for a country like India, where the demand for energy is growing at a fast pace?

A: See, such events like IEF in India is a big thing in itself. During our discussions with the international delegates from oil producing nations, international organisations and CEOs, experts, who participated in the event, we made them all aware about our energy demand and capacity as well as the appetite of the market. We asked them to create a reasonable pricing regime for big consumers like India.

Q: Prime Minister along with you have been calling for reasonable pricing for big consuming countries like India and China. You have said that the Asian Premium of the energy market should be replaced with a dividend. Do you think that such a demand will be met?

A: As consumers, we will have to explain to the suppliers, including OPEC, that there should be competitive pricing policy for large consumers like India and China. They should be asked, why we should pay the highest prices even when we are consuming maximum energy that they are producing. The question becomes more important as in next 25years, India and China will be consuming about 60-70 per cent of the energy that will be needed in the world. Following the same, we have started an initiative under which, we, the Asian Nations will jointly leverage our buying power to influence the oil pricing. During our meet with the Chinese delegation on the sidelines of IEF, we felt that the consumers can dictate, influence, rationalise the future price of oil.

Q: Gas Trading Hubs are being created in India. Can you inform us by when they will come into existence? And the impact that these hubs will have on the pricing freedom of the fuel and benefit the consumers?

A: I feel, these hubs will start functioning by the end of this year. Their creation will definitely have an impact on the pricing freedom in the country. Last but not the least, these hubs will benefit the consumers as chances are there that they will start getting cheap gas with time. The gas trading hubs along with the piping facility, both being created and developed, will help us in providing clean and cheap fuel to people and other areas where they are needed like industries.

Q: Several countries want to enter into the retail market of India but are waiting for simplification of the existing regulatory norms. Can you let us know about the hurdles and the steps being taken by the government to end them?

A: There are no regulatory restrictions. Presence of Essar group and Reliance group is an example. Secondly, Total is in a mood to enter the Indian market, while the British Petroleum has taken a licence for the same. Undoubtedly, they are not able to increase the volume that is being sold by them and this is not happening due to regulatory restrictions. Their entrance into the Indian market is definitely beneficial for the country and its consumers as they will have a number of options to choose from. The competition in the market will help in reducing the prices and availability of quality products in the market. Actually, they, the countries and companies, are seeking for the business facility, which will come automatically with the increased competition.

Q: When it comes to pipeline and marketing business, something that automatically props-up is the issue of conflict of interest. The Petroleum And Natural Gas Regulatory Board (PNRGB) has been directed to come up with a mechanism that handles the situation. Can you please inform about the kind of clarity that is needed?

A: The two businesses, namely the pipeline and marketing, should be kept apart. PNRGB has been directed to look into the issue of GAIL so that the problem of conflict of interest is terminated at the earliest. I feel a pipeline grid similar to power grid should be created in India so that ONGC gets a fixed rate of return for its pipeline business. On the other hand, the marketing business will depend only on competition in the market.