Companies such as Woodland, Levi's and other apparel companies to automobile companies including passenger cars and two-wheeler firms are offering pre-GST discounts. 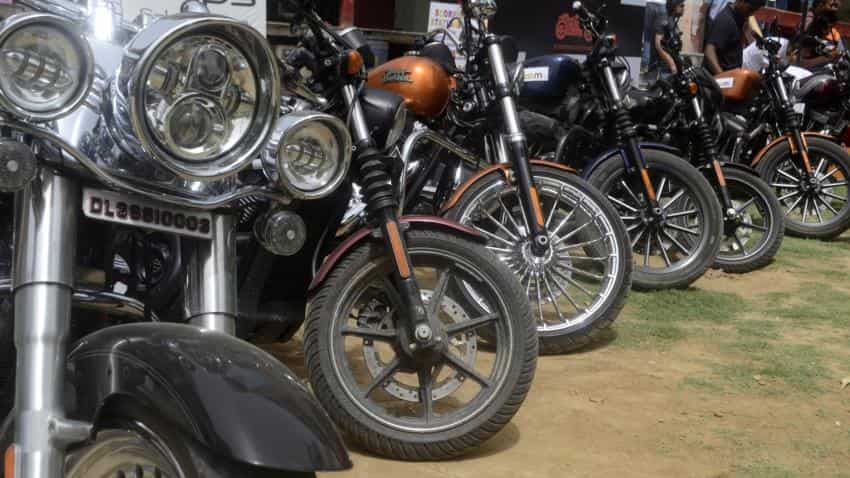 Bikes at a dealership being offered on discount. Photo: IANS
Written By: PTI
RELATED NEWS

It is turning out to be bonanza time for consumers as companies, ranging from apparels to car manufacturers, woo them with attractive discounts ahead of implementation of the GST next month.

While apparel manufacturers are trying to liquidate old stock ahead of the new tax regime, automobile companies are attempting to draw buyers to showrooms with attractive limited period discounts of up to Rs 2.5 lakh across a range of vehicles sold in the country.

Brands such as Levi's, Reebok and Woodland are currently on a clearance mode offering high discounts.

"The retailers do not want to keep much of stock because the remaining stock will move to the GST regime and the margins would then vary. No brand can sell the entire stock before July 1 but they are trying to do the maximum," Woodland Worldwide MD Harkirat Singh told PTI.

He said the GST has come just ahead of the usual seasonal discount and the brands have slightly advanced their offers.

Woodland is currently offering up to 40% discount on maximum of its items. On select items the discount is even more.

An employee at an exclusive store of Levi's here at the Capital said the company sent instructions to "clear old stock by offering these discounts as soon as possible because of the GST".

Levi's is offering buy-two get-two scheme on most of its items. Similarly, footwear majors Reebok and Bata are also offering up to 50% discount.

The GST Council has decided to tax man-made apparel up to Rs 1,000 at 5 %, while those costing above Rs 1,000, will attract 12 %. At present the total tax incidence is around 8 % depending upon the states.

On the automobiles front, Maruti Suzuki, Hyundai, Honda, Nissan, Mahindra and Mahindra and Ford India have all come out with different schemes that are valid for June only.

Hyundai Motor India dealers are offering discounts ranging between Rs 25,000 on Elite i20 and all-new Xcent to Rs 2.5 lakh on premium SUV SantaFe.

"We are giving price protection to the customers for cars retailed from June 10 to June 30 which means that customers will buy the car at pre-GST price now. Post GST implementation whatever the difference in ex-showroom price it will be returned back to the customer by the dealer," a Honda Cars India spokesperson said.

Japanese carmaker Nissan's dealers are also offering benefits of up to Rs 80,000 on sports utility vehicle Terrano and around Rs 25,000 on small car Micra.

Industry analysts said the companies have been forced to come up with the discounts as potential customers have held back on purchases expecting prices to come down after the implementation of GST.

Already, Ford India has announced discounts of up to Rs 30,000 on its compact SUV EcoSport, sedan Aspire and hatchback Figo to pass on benefits of new tax rates under GST.

German luxury car maker Audi has slashed prices of its models in India by up to Rs 10 lakh till June 30. Rival BMW also said it is offering "benefits up to 12 %" on ex- showroom prices that include GST benefits.

Besides, Mercedes Benz has announced reduction of prices of its vehicles produced in India by up to Rs 7 lakh. Tata- Motors-owned Jaguar Land Rover (JLR) has cut prices of select models by up to Rs 10.9 lakh.

In the two-wheeler space, niche bike maker Royal Enfield is pre-emptively extending the GST benefits to its customers while Bajaj Auto has also announced reduction in prices of its motorcycles by up to Rs 4,500 to pass on the expected benefit of GST to customers.

The Consumer Electronics and Appliances Manufacturers Association (CEAMA) said discounts are being offered as traders are worried over cash flow.

"The nearing of GST has caused a discomfort amongst the traders as they are worried over the cash flow that might occur during GST implementation therefore, offers are being introduced," said CEAMA President Manish Sharma.

He further said that businesses will be normalised over the next two-three months of operations.