Exclusive! Muthoot Capital COO Madhu Alexiouse has this to say about Q2 to Zee Business

In an exclusive conversation with Zee Business TV, Madhu Alexiouse, Chief Operating Officer, Muthoot Capital Services has revealed that the company's disbursement has become steady over the last three quarters and it has successfully maintained its growth trajectory. 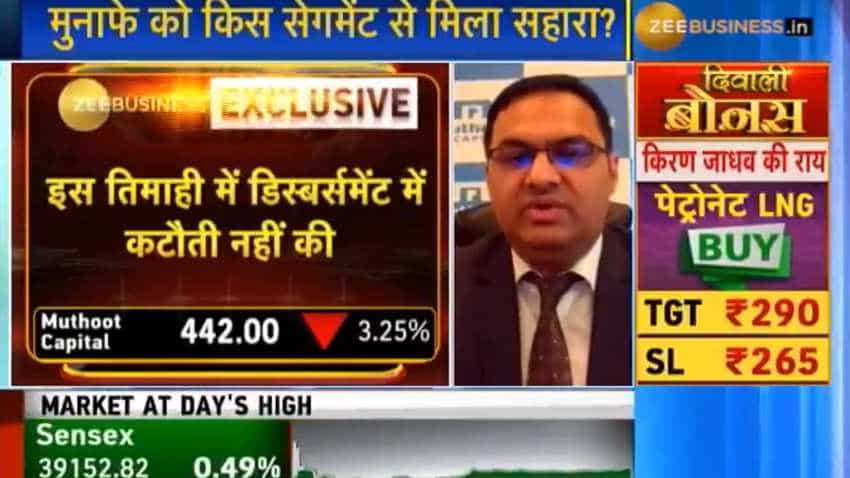 Muthoot Capital has posted a net profit of Rs 14 crore as against a net profit of Rs 21.4 crore in the same quarter last year. The total income of the company for the second quarter of this financial year touched Rs 145 crore. The company said that it has disbursed two-wheeler loans amounting to Rs 463.2 crore and had a total disbursement of Rs 487.8 crore during the quarter. The total AUM (Assets under Management) reached Rs 2779.3 crore at the end of the quarter, including the assigned portfolio of Rs 107.2 crore.

Talking about the profit, Alexiouse said there are several factors affecting the NBFC segment including cost of funds. "This is one of the components that have impacted us. Also, we were expecting the NPAs to reduce but that did not happen because of several issues like rains in Kerala and Karnataka. So, we had to face issues in collection. However, we hope it to improve in Q3," he said.

"While the auto industry is reeling under severe slowdown, the recent intervention by the government should help in reviving the market sentiments. The cost of funds has remained stable in the last quarter but getting the funds from banks has become a lengthy process. We, at MCSL, are happy with our profitability and steady state of the business and with the continuation of our planned spread into newer geographies. The Onam festival did see signs of revival in the Kerala market. We expect the on-going festive season will improve sentiments and business volumes," Thomas George Muthoot, Managing Director, Muthoot Capital Services Ltd., said in a statement.