The domestic water purifier market will witness consolidation in coming years at the bottom of the pyramid, where lots of unorganised players are operating, according to Sinha. 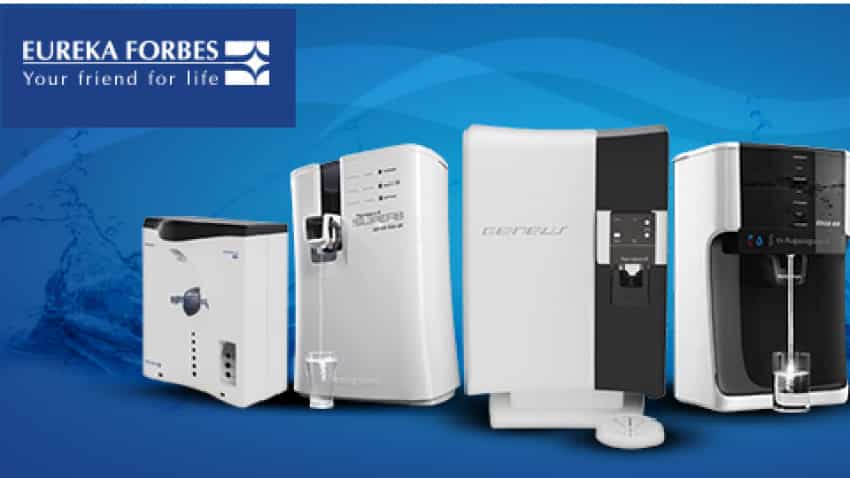 Eureka Forbes, is looking to further consolidate its position on account of focus on non-metro and semi-rural markets, Photo: eurekaforbes.com
Written By: PTI
RELATED NEWS

Shapoorji Pallonji Group firm Eureka Forbes, a leader in electric water purification segment, is looking to further consolidate its position on account of focus on non-metro and semi-rural markets, a top company official has said.

The company sees non-metro and semi-rural markets as a major growth driver going ahead. While in metros, it expects a rise in the demand for premium range of water dispensing products.

"We would like to consolidate our position in the segment and grow the market," Eureka Forbes Chief Transformation Officer Shashank Sinha told PTI.

Sinha claimed Eureka Forbes held nearly 60 per cent share of the entire electric water purifier market that is pegged at around Rs 4,500 crore.

"We are closer to 60 per cent market share in the electric water purification market," he said, adding that the market penetration of water purifier is less in the country and would expand in coming years as the awareness about benefits of pure drinking water is increasing.

The domestic water purifier market will witness consolidation in coming years at the bottom of the pyramid, where lots of unorganised players are operating, according to Sinha.

The company, which had a gross group turnover of Rs 3,000 crore in 2017-18 (April-March), gets over half of its revenue from the water purifier segment. The remaining revenue comes from other verticals such as vacuum cleaner, air purifier, security solutions and other segments.

It has manufacturing units at three locations -- Bengaluru, Dehradun and Baddi -- with a manufacturing capacity of around 12 to 15 lakh units per annum.

The company sells its range of water purifiers in around 40 countries with its Swiss arm Lux International.

As per market reports, the water purifier segment in India is expected to grow at 11.5 per cent CAGR during 2018-2025.

Kent RO, Livpure, Tata Swach and HUL are among the other top brands in the segment besides Eureka Forbes.