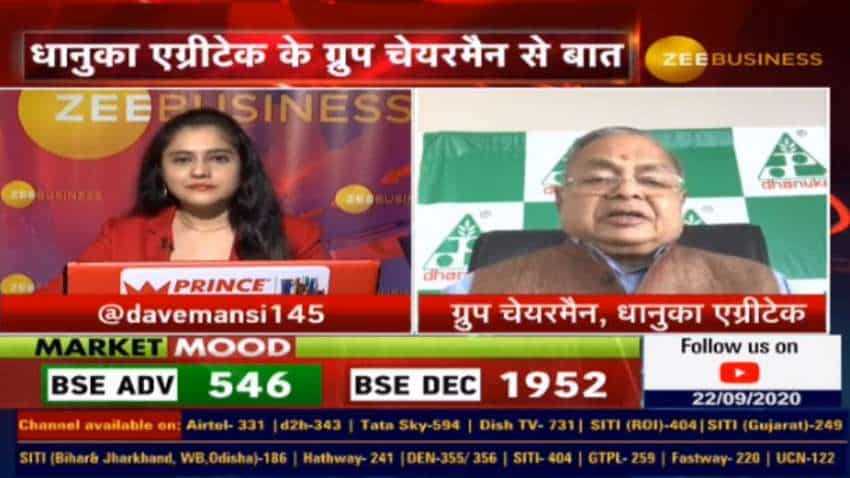 Ram Gopal Agarwal, Group Chairman, Dhanuka Agritech Ltd., talks about government’s decision to increase MSP of Rabi crops, monsoon and its impact on business and performance in Q2FY21 among others during an interview with Mansee Dave, Zee Business. Edited Excerpts:

The MSP on Rabi crops has been increased. How do you see this step?
It is a very good move by the government. The overall development of the country cannot happen, if the right price is not provided to the farmers, today. And, we can’t think about creating a new India without developing the villages as well as the farmers. If a better price will reach to the farmers in which he can save some good money after fulfilling their needs then they may increase their expenditure in other activities like FMCG goods, building their houses and modernizing agriculture among others. So these activities are likely to bring good growth in these sectors and overall, to the country’s GDP and its economy.

I would like to understand your assessment on the overall business structure as the ground reports are supportive with good monsoon, higher procurement and better realization for the farmers?
Going forward it is expected that the business is going to be very good because the Rabi season is going to wonderful historically as the dams are full and the ground level water is recharged. So the Rabi season is going to be very good for overall India. The government has increased the MSP, which means good money will reach to the farmers. As we belong to the crop protection chemical industry, which means that we are linked with agriculture and agriculture is still linked with either monsoon or the water availability in about 50% areas. So, nature has given a good amount of water this year and secondly, the Modi government also has many schemes like it has completed the works on many dams by taking them on priority, which was not completed yet. Plus new areas are coming into irrigation. Everything, like fertilizer, pesticide and hybrid seeds, will be in demand at places where water is available. So the coming time is going to be very good, especially for agriculture in the country. And, India has huge potential for exports but it has not been exploited completely till now. Whatever laws were enacted by the government in the recent past are in the interest of the farmers and going forward, it will bring all types of growth to the sector, whether it is related to the export sector or the domestic market or high protein and high-value crops. Thus, good progress will be seen in these sectors in the coming time.

June Quarter results were fantastic with net profit rising 253%. You can see that the performance will sustain but can you say the area that will support it?
The first-quarter results were historical in it and such results are a bit difficult now. Indra Dev (the God of Rain) has been more kind this time and in a way that in August and September he has flooded many areas across the country due to which farmers were harmed in many areas Thus, when the crops of the farmers are destroyed, then where he will use the fertilizer and pesticide. So, there is no chance to have such growth in the second quarter. But again the growth is likely to be good in the third quarter if Rabi season remains good. Now you can see that vegetable prices have doubled due to frequent rains. Farmers can, now, sell his produce wherever he will get more profits. Now he has been set free from the chains in which he was supposed to sell his produce in Mandi's present in the area. The government has given him the freedom to sell his produce wherever he wants to include in his field. This will reduce the gap between the consumer price and farmer price and there are maximum chances in which the farmers will get better prices, as he has options like selling his crop in the field or by storing them in cold storage or any market across India, where he will get a better price for his produce. Earlier, we used to talk about the green revolution in the agriculture sector but it is an old thing and now we are talking about the evergreen revolution. And under it, the government is coming with good policies for the agriculture sector and the farmers are getting aware. This is why the coming third and fourth quarter is going to be a very good one but there will be some pains in sustaining it in the second quarter.

The company has launched two fungicides in the recent past. Tell us more about these products and the plans related to other products that can be launched in the recent future?
Currently, we have launched two fungicides especially for grapes. Grape is a crop that faces a lot of attacks by diseases and if you use a single fungicide again and again then it creates resistance problem. One product is Downey Mildew for grapes and the second is Powdery Mildew. These two products are launched in collaboration with two different companies based in Japan. One is a product of Nippon Soda, while the second is a product of Nissan Chemical Corporation. These two products are related to grapes and one product will be taken on chillies. Gradually, we will explore them on other crops to find where they are beneficial and then decide on their expansion. Currently, we are working with six Japanese companies and their new products are in our pipeline and data generation work is going on on them.

The government has a law under the Insecticide Act that the nine three products will be registered within a year and it can be extended by a maximum of six months. But it takes five years in getting your products registered. So we through our association have made a representation to the government that if we do not provide new tools to the farmers the how will they progress? So, the government has understood the matter and has decided to create a new system for faster registration of new products. So many new products will come from Dhanuka’s basket in the coming time. We hope that we will launch at least two new pesticides – the first time in the country – every year in collaboration with our Japanese principals.