Cyrus Mistry vs Tata group: An RTI reply sheds light on this surprising tun of events

The Ministry of Corporate Affair's western region director had raised questions on some of the grounds Registrar of Companies (RoC) used to declare that the sacking of Cyrus P Mistry as chairman and director of Tata Sons and Tata Consultancy Services (TCS) violated Companies Act and RBI rules, according to an RTI reply. 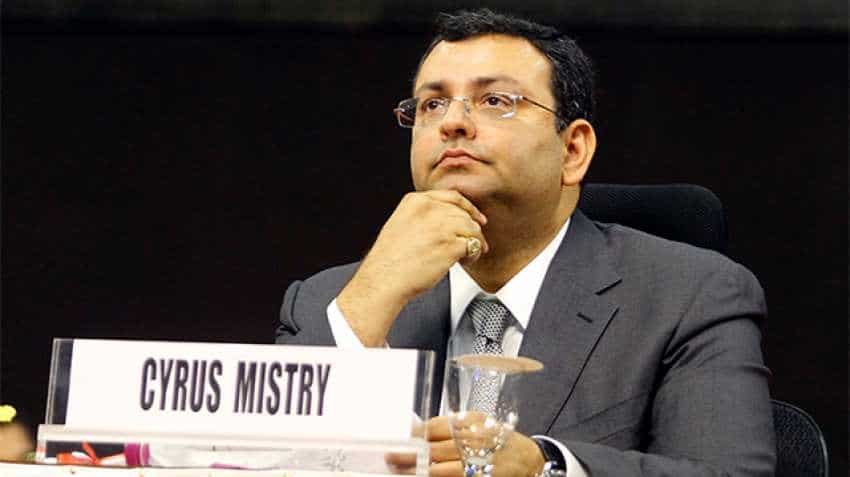 A Mumbai-bench of the National Company Law Tribunal (NCLT) in July this year dismissed a petition by Mistry who had alleged oppression of minority shareholders and mismanagement. Image source: Reuters
Written By: ZeeBiz WebTeam
RELATED NEWS

The Ministry of Corporate Affair's western region director had raised questions on some of the grounds Registrar of Companies (RoC) used to declare that the sacking of Cyrus P Mistry as chairman and director of Tata Sons and Tata Consultancy Services (TCS) violated Companies Act and RBI rules, according to an RTI reply.

In response to a Right to Information (RTI) query filed by Shapoorji Pallonji Mistry Group, which is the single largest shareholder of Tata Sons with 18.4 per cent shareholding, the Ministry of Corporate Affairs last month furnished two letters - a January 25, 2017 letter of the RoC, Mumbai and a February 17, 2017 letter from the Office of the Regional Director, Western Region of the ministry.

Responding to the observation of RoC, Mumbai on the procedural aspects like documents submitted or the signing authority, in removing Mistry as chairman and director of TCS, the Regional Director, Western Region, Ministry of Company Affairs -- the senior reporting authority, raised doubts on the efficacy of the findings.

A spokesperson for the Shapoorji Pallonji (SP) Group stated, "The RoC having identified the gross violations, had referred the matter to the Regional Director under Regulation 11(2) of the Companies (Registration Office and Fees) Rules, 2014. Under these rules, it was incumbent upon the RD to provide an opportunity to the Director so removed (in this case, Mr. Mistry) to be heard in the matter and to seek his views with respect to such removal. However, in the present case that has not been done.

"The NCLT did not have the benefit of these documents before it passed its order. In any event, these documents are now placed on record before the Hon'ble NCLAT. We are confident that justice will prevail." According to the RTI response, the Regional Director (Western Region) asked RoC, Mumbai if a similar standard was followed or prescribed by RoC in all other cases of removal of directors.

It also asked RoC to furnish a list of companies where directors were removed under the Companies Act, 2013 and the details of documents furnished/called for in such cases.

In addition, the Regional Director questioned RoC on whether as per law, many documents which were not annexed to the Form DIR 12 filed by TCS pursuant to the removal of Mistry as director, were mandatorily required to be annexed. If not mandatory, whether RoC can insist on the same, it asked. As per law, Form No. DIR-12 is to be filed with the Registrar within 30 days of the appointment/removal of a director.

According to the letter furnished in the RTI reply, RoC cited not sending of representation made by Mistry against his sacking to all shareholders but instead making it available for inspection at the company office as a violation of the Companies Act.

Other violations, according to it, were that the Special Notice for the sacking was not "properly authenticated". Also that the Article of Association of Tata Sons prescribed process of removal of the Chairman and that such a removal required prior approval of RBI as Tata Sons was registered as a non-banking finance company.

A Mumbai-bench of the National Company Law Tribunal (NCLT) in July this year dismissed a petition by Mistry who had alleged oppression of minority shareholders and mismanagement. NCLT ruled that the board of directors is competent to dismiss executive chairman, adding that Mistry's conduct does not augur well for the smooth functioning of the group.

Mistry, who was ousted from the board of Tata Sons after a four-year stint in October 2016, claimed in his petition to NCLT in December 2016 that he was illegally removed as chairman of the software-to-salt conglomerate. He has challenged the NCLT order in the National Company Law Appellate Tribunal (NCLAT).

The RTI query was filed more than a month after the NCLT verdict, on August 31, 2018 and the reply was submitted to the applicant on October 3.  Tatas had vehemently denied any violation when the contents of the RoC letter revealed in the RTI were reported late last month. Tata Sons had said all the requisite processes under the Companies Act were followed in removing Mistry as the group chairman and also from the board of TCS.

"The respective board of directors acted as per the provision of the Companies Act as well as in compliance of the articles of association of the company. This was subsequently approved by both the shareholders of Tata Sons and TCS the NCLT has also confirmed that the process followed for removal of

Mistry was valid and accordance with law," a Tata Sons spokesman had said. "All requisite processes were followed in line with the Companies Act in case of Mistry's removal from the board of TCS as also as the chairman of TCS and Tata Sons."