B Thiagarajan, Joint Managing Director, Blue Star Ltd, during an interview with Swati Khandelwal, Zee Business, said, “Although the industry has suffered due to poor summer sales but can post a marginal growth of 5 per cent by end of FY19.” B Thiagarajan said, “Although the industry has suffered due to poor summer sales but can post a marginal growth of 5 per cent by end of FY19.”
Written By: ZeeBiz WebTeam
RELATED NEWS

Vaccination program could generate a revenue of around Rs 200 crore: B Thiagarajan, MD

Recovery is strong & market is moving in the right direction: B Thiagarajan, MD, Blue Star

B Thiagarajan, Joint Managing Director, Blue Star Ltd, during an interview with Swati Khandelwal, Zee Business, said, “Although the industry has suffered due to poor summer sales but can post a marginal growth of 5 per cent by end of FY19.” Edited Excerpts:

Q: Blue Star has announced a target of being a 1-billion-dollar company in the next five years. Let us know about the ways that will be adopted to achieve the target?

A: It is quite clear that the consumers spending will continue. We do have a spending spree as far as the markets are concerned. It is a different matter that there is a margin pressure but consumer spending specifically in tier III, IV and V towns are very robust. Even though the room conditioners summers sales were very poor, and the industry has suffered but I think that towards the end of this financial year there will be a marginal growth of at least 5 per cent for the market is my projection. And, Blue Star will end up by 10 per cent growth that is despite poor summer.
The margin would have been under pressure, we must see how moving forward the commodities as well as the exchange rates stabilise. What I am witnessing is the consumer spending will drive the products business whether it is room conditioners or commercial refrigeration products. We want to move into the next orbit by building scale there.

As far as the electromechanical business is concerned the combined MEP offerings, we are the leaders not only in air-conditioning but also in electro-plumbing services together. We witness very clear signs of revival there not only in infrastructure projects like metro, railways or airports but quite a few buildings are getting constructed and few hotels and hospitals are will come up. So, the next one is the professional electronic business which has turned around in this year in terms of moving upward. It will witness growth with the CapEx cycle flowing into the manufacturing sector. Therefore, all the core businesses are going to witness growth and we are there at the right time in my view.

The second thing is the new business where we are investing in our international footprint and we are moving very fast with 20 countries in middle-east, SAARC and North Africa and it is doing well. Water purifier business is getting routes. 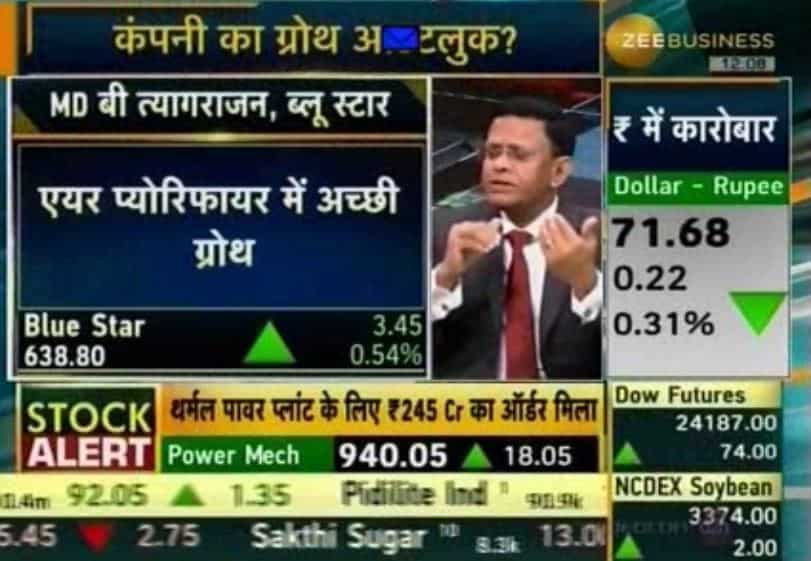 Q: Air purifier is something where you are planning?

A: Our Air purifier business is doing well but it is a Delhi Mumbai product just for 2-3 months and that’s why it is not going to be a significant one. But, building scale in commercial refrigeration is very exciting like in de-freezer and cold rooms.

Q: B2B and B2C are the co-drivers of your business and that’s why there is a need to have a focus on both the segments. You talked about industrialisation, which means B2B, but let us know about the offerings in the B2C segment and how will increase your hold in the segment?

A: It has been strong, and we will end up about 10 per cent of the market share this year. Our goal is to reach the market share of 15 per cent in the next 2-3 years and we are on course to that through differentiated products. We have mastered the combination of offering the best technology and the customer experience and we have been delivering a remarkable customer experience over there.

Q:  You have set a top line target of 1-billion-dollar, but I would like to know about the bottom line at least when you have said that it can commodity prices can have an impact on the margins. What are your profitability targets and tell us about the ways that will be adapted to meet it?

A: It is not going to be difficult because the profitability is a functional scale. So far, we were all fragmented here and there, and we are reaching the right size that I feel about air conditioners. I am sure that from the current level of 60 lakh units (6 million units) of which 10 million units will provide adequate opportunities for all segments.

Q: Did custom duty hike had any impact on your business, if yes, let us know about it?

A: It is not due to the customs duty, but we suffered more due to the exchange rates change. This year had everything that a marketeer will have to see, and they were bad summers followed by rupee depreciation followed by customs duty hike and then the interest rate hike due to the NBFC problem. But, here again, the industry could cope with because of the scale. If it is four years ago then everyone would have collapsed but we are able to cope up with all these turbulences. But the focus is now on how the summer will be and it increasingly becoming difficult to predict the weather.

Q: You have set a target of achieving a turnover of Rs1000 crore from the overseas market. Have you added any new market in your list as you have had a special focus on the Middle East, Gulf and Africa?

A: We are comfortable with that 20 countries as we are a new entrant in those markets and thus there is enough scope for improvement not only in B2B products but also in B2C products. We do the original equipment manufacturing (OEM) for certain international brands like European and American brands. There we have committed to source and manufacturing facility, that will also help us. The exciting news could be dollar chemical projects space and it is time when construction takes place and there will be pockets in India and I expect the construction to revive. I suppose it will be post-election.

Q: Do you have any expectations of a price hike in recent future, if yes, what can be the quantum increase?

A: We have been increasing the prices since June in the range of 2 to 3 per cent, so it is around 10 per cent and the market has accepted it. Rightly, another 2 to 3 per cent is required but that is not taking place and if you do that than the demand is not going to be what it should be. On the other hand, 40 per cent of the sales are happening through consumer finance, so there will be an interest by out the cost. I understand that there will an area, where you need to cope with the growth but not worry about the margin growth there will be a margin erosion and I think that it is going to happen between 150-200 basis points. It will be in the cooling products, but we hope that the demand will go up during the summers.

Q: Update us on the talks on land passing with realty developer Oberoi Realty? What are you expecting from the deal as it is expected that the plot will fetch around Rs150 crore to you?

A: Negotiations are on and it is in the public domain. It is being delayed due to certain reasons and I am unable to state a period. Another thing is that we are not in a hurry at all as the facility is owned by us and we should get a right price and estimates are right that we should get around Rs200 crore, but we are doing everything to close the deal at the earliest.

Vaccination program could generate a revenue of around Rs 200 crore: B Thiagarajan, MD

Recovery is strong & market is moving in the right direction: B Thiagarajan, MD, Blue Star