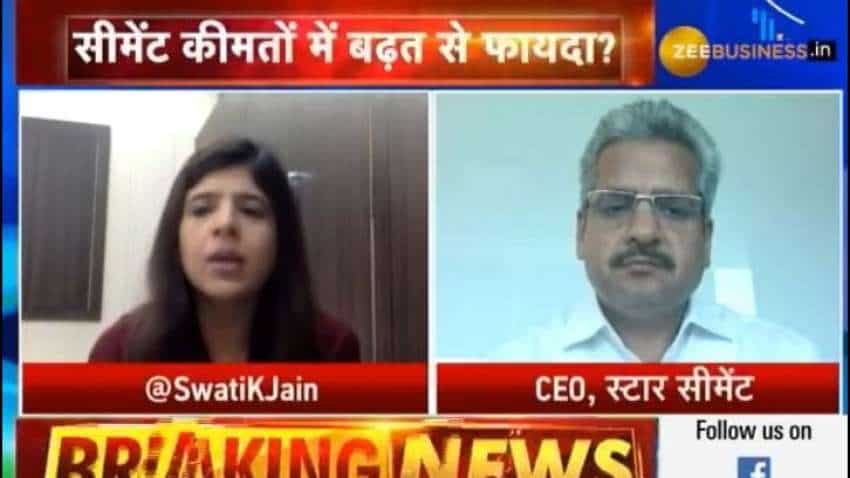 "Largely, there was a price drop of around Rs 25-30 per bag in the Eastern sector during the monsoon season. And I expect that there can be a price hike of around Rs 25-30 in the next one-two months," Sanjay Kumar Gupta
Written By: Jitesh Kumar Jha
Edited By: ZeeBiz WebTeam
RELATED NEWS

Q: There has been a price of Rs 10-12 per cement bag in South India. What would you like to say about it, and will your company take a price hike?

A: There has been a slight upward trend in the prices for the last one to one-and-a-half months. It is normal because prices firm up after the monsoon as there is a fall in the prices during the monsoon. It has always been seen that the prices remain strong on the fourth and the first quarter. So, this increase is largely to compensate for the prices that fell during the monsoon season. I feel, this increase will be seen across all the regions. The prices are firm even in the East and it seems that prices will remain firm in the next one to two months.

Q: Can you provide a quantum by which the prices can go up as you are saying the prices will remain firm?

A: Our capacity utilisation was quite good in the fourth quarter and almost every plant was working on 90-95% capacity utilisation. However, the third quarter was not so good for us because some technical issues emerged in two divisions in Meghalaya due to which we could not make dispatches that we wanted to do. The situation also continued even in January but in February and March, the dispatches returned to normal. As far as, CapEx is concerned, we started the Siliguri plant in January and it has improved our dispatches. The Siliguri plant is functioning at 35-40% capacity utilisation but it will go up to 100% in the next few quarters. Secondly, we were planning a clinkerisation plant of a million tonnes in Meghalaya and all the activities of this plant are online and on schedule. I expect that this clinkerisation plant will be commissioned in the next 24-30 months. Also, we are setting up a 14 MW WHR plant and it will also be completed in the next 12-15 months. As far as CapEx is concerned the total cost of these projects it will stand in a range of Rs 1,400-1,500 crore.

Q: During the last interview you said that you have a strong presence in the North-Eastern & Eastern region, but you will now focus on increasing your presence in other regions of the country and you are looking forward to M&A opportunities. So, let us know how the company will move towards growth as there will be a huge push towards infrastructure in the country? Will you adopt any strategy in FY22?

A: We want to grow in the eastern sector. In the next 4-5 years, we are contemplating establishing a plant in Bihar and also have plans of setting a clinkerisation plant in Madhya Pradesh. This is the growth plan for the next 4-5 years. Definitely, if we get any inorganic opportunities in the eastern region then we will look towards it. We would like to grow inorganically if we get any opportunity of our size. Normally, as a company, we have an overall capacity of 6 million tonnes and would like to take it up to 11-12 million tonnes in the next 4-5 years.

Q: Among trade sales and non-trade sales, which segment is performing better for you at present?

A: We have a major focus on trade sales. Our 80-85% sales come from the trade and 15% sales comes from the non-trade segment. Trade demand is good. Overall rural demand, semi-urban demand is also good and urban demand has also started picking up from the last quarter. So, I think, the overall demand will be better even in the first quarter of the new financial year. Definitely, in FY22, the first quarter will be better, and the second quarter is the monsoon quarter. So, we hope that the industry will come back to normal growth in FY22. It was expected that the industry will degrow by 10-12% in FY21 but it will not happen, and it seems that the FY21 will remain almost flat for the industry or at an overall growth of 1-2% but in FY22 it is expected that the industry will grow by 5-6%.