Canara Bank is Doing Well and will make sure that quality growth is maintained in all segments of banking: RA Sankara Narayanan, MD & CEO 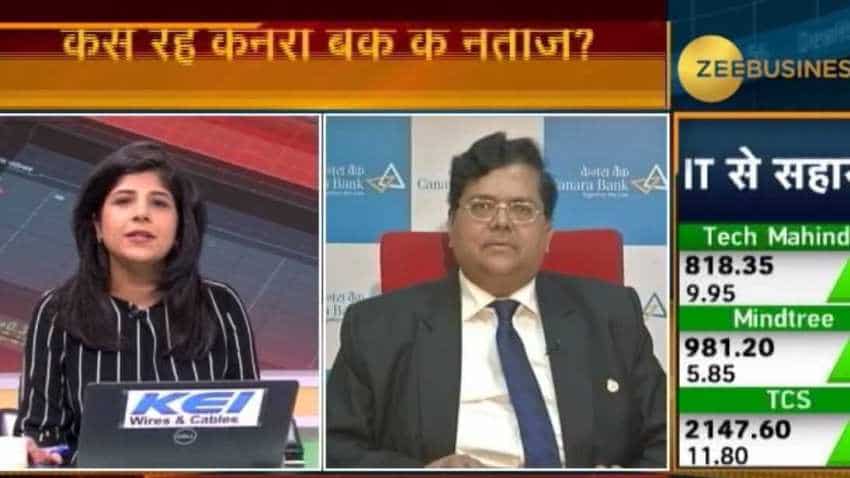 We will ensure that quality growth is maintained in all segments of banking whether it is retail, SME, agriculture or corporate trading, said RA Sankara Narayanan. Image source: Zee Business

I am very confident that Canara Bank is doing well and will do much better in coming years, says RA Sankara Narayanan, MD & CEO, Canara Bank. During a conversation with Swati Khandelwal, Zee Business, Mr Narayanan also said that we are seeing a reduced slippage as our slippage in the fourth quarter stands at Rs2,500 crore against an average slippage of Rs5,000 crore in earlier quarters.  Edited Excerpts:

Canara bank has posted improved numbers in the fourth quarter of fiscal 2019. tell us about the factors that helped Canara Bank to post such numbers in the fourth quarter and will it continue further?
There are two things and they are growth and reduction in NPAs. Growth: Growth is at 13 per cent for the current financial year. We have made Rs10,44,000 crore of business till March 2019. Operating profit has improved by Rs1000 crore to Rs10,600 crore against Rs9,400 crores of the last fiscal. It has resulted from a net loss of Rs4,200 crore last year and in the current year, we have made a net profit of Rs347 crore.

Reduction in NPAs: Last year’s provision coverage ratio stood at 58 per cent and this year it stands at 68.13 per cent. Due to that the gross NPA, as well as net NPA, has dropped, substantially, and the gross NPA has dropped from 11.84 during last year to 7.48 this year. In the case of net NPA, we were at 8.83 during last year and currently, it has dropped to 5.37. Overall capital adequacy is also good for the bank which is close to toll person.

We are very confident going forward and we will ensure that growth remains intact, there is a decline in NPAs and increase in profitability. In short, bank research for FY20 will be very strong to make sure that we perform better than the last fiscal, i.e. FY19. I am very confident that Canara bank is doing well and will do much better in coming years.

What is the bank’s strategy for growth and development further?
Definitely, we will ensure that quality growth is maintained in all segments of banking whether it is retail, SME, agriculture or corporate trading. We select the customers with due diligence with good projects.  The resolution of the NPAs will add value to me as far as Provision Coverage and profitability are concerned. That will also have a positive impact on my overall capital adequacy.

In addition, we are seeing reduced slippages, which is a very good sign for any bank, particularly for Canara Bank. Compared to Rs5000 crore average slippages during the earlier quarter, our slippages in the fourth quarter stood at just Rs2,500 crore. That’s why I am confident that going forward the bank will have better quality assets with lesser NPAs and profitability.

Tell us about the sectors/accounts that have recovered due to the NCLT resolution and about the sectors/account that will be recovered in the near future?
It is not only the NCLT accounts, but we are also following on other accounts on an individual basis and on a collective basis through the consortium. And, the gross NPA of Rs39,000 crores have been recovered. Any amount I recover it reduces the pressure on provisions and adds to the interest. The funds can also be effectively deployed for the betterment of the bank. On that count, I am very very confident that we will do much better going forward from here.

Name the sectors that can create problems?
A: As far as stress is concerned then most of the banks are selective as far as the infrastructure segment is concerned. Unfortunately, due to IL&FS some of the NBFC sectors is under strain but it can be resolved easily with proper cash management at NBFC level as well as the security efficiency and the assignment of debt to some other banks and financial institutions. They can overcome the issue very easily.

I am very confident that there is no stress as far as the banking sector is concerned and I am sure that NPA will be solved automatically and you will find the economy is growing up. Development of the economy helps in solving other problems. In fact, I am confident not only for Canara Bank but for all the banks as there NPA figures will be lower and their performance will be better going forward.

Update us on your existing exposure on IL&FS?
A: We have an exposure of Rs300 crore in NBFCs, but we have also funded their various infrastructure projects, of which some are functioning and stranded also. But, wherever there is slippage due to recovery then we have treated them as NPA.