There are quite a few accounts that are lined up under the Samadhan Scheme led by SBI especially those in the power projects and we expect around Rs1,000-1,500 crore of reversal in this quarter", says Atanu Kumar Das of Bank of India. 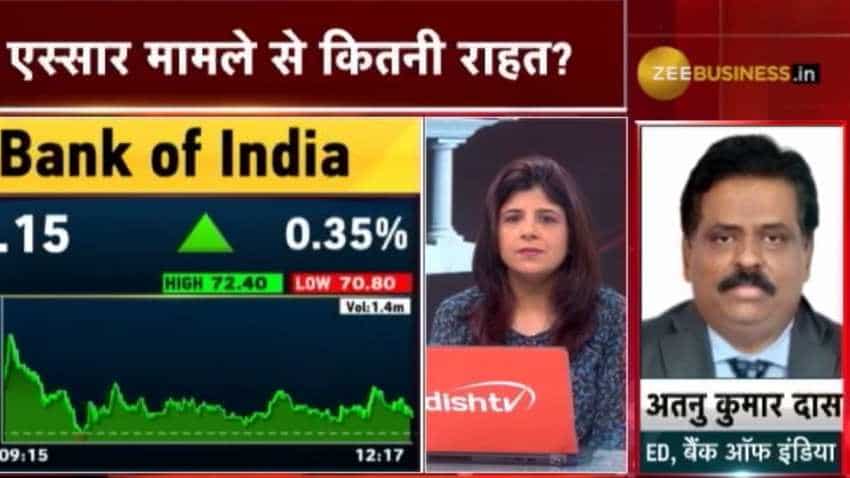 During an interview with Swati Khandelwal, Zee Business, Atanu Das said, "the bank will come up with Qualified Institutional Payment (QIP) in the fourth quarter to raise around Rs2,500 crore".
Written By: Jitesh Kumar Jha
Edited By: Asit Manohar
RELATED NEWS

There are quite a few accounts that are lined up under the Samadhan Scheme led by SBI especially those in the power projects and we expect around Rs1,000-1,500 crore of reversal in this quarter", says Atanu Kumar Das, Executive Director, Bank of India. During an interview with Swati Khandelwal, Zee Business, Das said, "the bank will come up with Qualified Institutional Payment (QIP) in the fourth quarter to raise around Rs2,500 crore". Edited Excerpts:

ArcelorMittal has paid Rs 40,000 crore to the State Bank of India (SBI), the lead banker of the bankrupt Essar Steel, and Bank of India has an exposure of around Rs1,985 crores in the company. So, let us know the time by which you will get the money back? Do you anticipate any more recoveries in this quarter?
It will take a day or two because the documentation work has been completed. So, it's just a matter of time and we are happy because a good resolution has happened at the end. Quite a few accounts - mainly in the power projects - are lined up under the Samadhan Scheme led by SBI and we expect a reversal of about Rs1,000-1,500 crore from those in this quarter. Apart from this big account resolutions, we also have a specialized scheme/non-discriminatory scheme for Rs1-50 crore accounts and are expecting a recovery of around Rs700-800 crore from it. Possibly, we can't get the complete amount in this quarter but the process will be completed. Thus, our recovery scenario looks quite promising in Q3 & Q4.

What is the expected recovery that Bank of India will get in Q3 & Q4?
It will be more than Rs6,000 crore.

Do you have any exposure in accounts like DHFL, Jet Airways and Ruchi Soya or any specific account from which big recovery is expected?
I can just only speak about certain accounts like Ruchi Soya and its work is in progress. I think it will be shorted out very soon. When it comes to DHFL then accelerated provisioning of the account was done at our end in the last quarter before the account slipped and are ready for further provisioning of the same. Resolution of the account is in process and we are ready for it. Besides, major accounts like Dighi Port among others are lying in the NCLT and we are expecting a lot from them. There is a Sanjeevani scheme under which around Rs10,000 crore will be recovered. The scheme deals with accounts below Rs1 crore and we are working on it in a campaign mode. Similarly, a good number of accounts were recovered during the Lok Adalat hearing, yesterday. Apart from the bigger accounts, we are also focusing on small accounts, where the resolution process will be completed at a faster pace. Off course, bigger accounts will give us some leeway for right back and other things but we also have focused towards the small accounts.

What is your view on the environment and do you think that things are getting right and the worst has come to an end? What is your outlook on net NPAs by end of this financial year?
Credit growth is a systematic issue. We are aware that a lot of things have been done from the supply side, including rate transmission and policy initiatives by the regulator as well as the government. Generally, slowdown comes once in a decade or so, however, this slowdown has lingered for more than 8-10 months and it has happened due to the NPA problem. It will take some time. I feel things will turn as usual from the first quarter of the next financial year. We have slightly moved towards the positive zone and liquidity of around Rs3 lakh crore is present in the system and there has been a credit growth of around 1% from March, which has remained in the negative zone till September-October. Probably, we are looking for a quick-fix solution, but, every economic variable comes with some lag-effect. The budget is also coming and several steps are likely to be taken especially on the demand side. I think the situations had been bad to a maximum level and now, things will improve from here.

Government has around 89% stakes in your bank. So, let us know about the steps that will be taken to reduce it? What are your plans to exit from the non-core assets and subsidiaries?
When it comes to non-core assets, then we have been focusing on it and around Rs250 crore has been recovered mainly from real estate and few small investments. Apart from this, the divestment process is on for some big accounts, however, we haven't succeeded in it till date, but one of those accounts is likely to be divested by the fourth quarter. With all constraints, we will be able to raise around another Rs250 crore from the non-core assets, which means around Rs500 crore will be raised by the end of the fourth quarter. As far as net NPA is concerned, it has been brought down below 6% -after we came out from the PCA - and hope that it will be kept below 6% in future as well with no chances of breaching it.

When it comes to government stakes, then, yes, we want to bring it down from 89% but we are well capitalised at present. However, the process for QIP issue of around Rs2,500 crore has been started of which Rs1,000 will be in the greenshoe option. The QIP will be implemented in the fourth quarter. Actually, we are looking forward to a good story to approach the investors. And we have been in the profit zone for the last three quarters and there is a growth in our core income and margins. So, we have started the QIP process - on the basis of the success pattern of three quarters - which will culminate in the fourth quarter. Similarly, we are also planning something in the second quarter of the next financial year. Thus, we will try to improve our capital position further and in the process, government stakes will also come down.