Apart from GST conundrum, Patanjali also faced stiff competition from rivals which further slowed down their sales and profits. It seems like FMCG giants like HUL, Colgate and Dabur are competing with Patanjali in its own game. 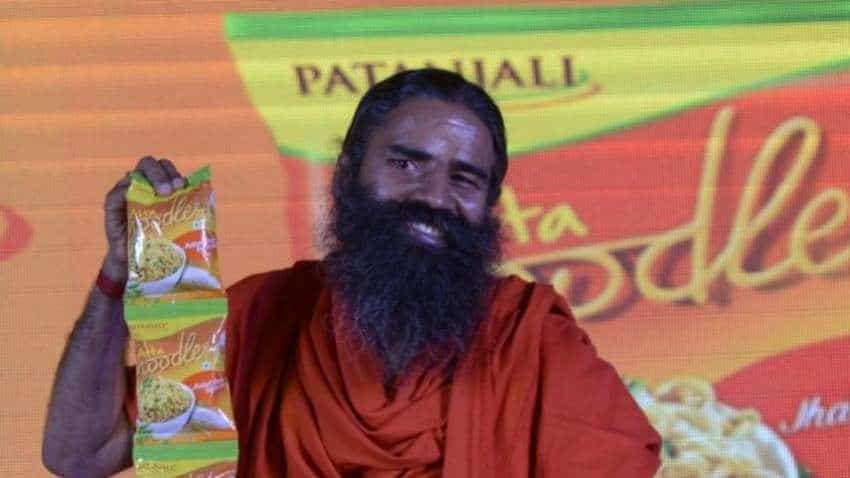 Baba Ramdev’s Patanjali which started off as a small pharmacy in 1997, was surely the name to watch out for in FMCG industry in the last few years. Photo: IANS
Written By: ZeeBiz WebTeam
RELATED NEWS

Baba Ramdev: To open over 500 Patanjali Paridhan stores across country this year

Baba Ramdev’s Patanjali which started off as a small pharmacy in 1997, was surely the name to watch out for in FMCG industry in the last few years. Many major rivals like Hindustan Unilever, Dabur and Colgate had some sleepless nights due to the popularity Patanjali was gaining with its ayurvedic and affordable products. However, it looks like the trend has reversed for Baba Ramdev and his company, as now they face downward trend in their sales. March 2018 year end was not a fruitful fiscal for Patanjali as its sales and profits have now dropped.

According to the data from research platform Tofler, Patanjali’s revenue came down by 10% to Rs 8,135 crore as on March 2018 compared to revenue of Rs 9,030 crore witnessed in previous fiscal of 2016-17, reported the Economic Times. Also, reportedly Patanjali’s net profit has now more than halved to Rs 529 crore in FY18 versus Rs 1,190 crore in FY17, as per data sourced by Care Ratings.

The Care Ratings report further explained that, Patanjali’s decline in turnover was due to the company’s inability to timely adapt to the GST regime and develop infrastructure and supply chain.

Apart from GST conundrum, Patanjali also faced stiff competition from rivals which further slowed down their sales and profits. It seems like FMCG giants like HUL, Colgate and Dabur are competing with Patanjali in its own game.

Patanjali has stepped its foot in FMCG product categories like toothpastes, shampoos, personal care, instant noodles and even dairy items. The company’s major breakthrough is from its herbal, ayurvedic and natural products where the company holds about 10% of the consumer goods market. When Patanjali started to stir competition leaders like HUL made their move by relaunching its ayurvedic personal care product Lever Ayush, also the Mumbai-based company even acquired Indulekha haircare brand and launched Citra skincare brand. Not only this, even Colgate was not far away as they introduced natural toothpaste brand Vedshakti.

Hence, GST roll out and rivals consistent fight as taken a toll on Patanjali’s financial performance.

Earlier an IIFL report noted that, growth slowdown in Patanjali is a direct result of poor management of trade channels and lack of a coherent advertising strategy. Splitting distributors according to product categories has also complicated retailer servicing.

Analysts at IIFL also said, “In toothpaste, our understanding is that market shares have stabilized and are not growing any further. This is good for incumbents such as Dabur and Colgate.”

"Dabur is also expected to benefit in categories such as oral care and hair care. We have already witnessed market share in honey rebound to earlier levels for Dabur," they added.

In other personal care categories, IIFL explains that, Patanjali sales were never material, but in these categories, Patanjali may have witnessed a decline and hence positive for the FMCG space in general.

In IIFL’s view, “Lack of advertising support, lower trade spends vs. other brands, a complex distribution structure and an incoherent marketing strategy have been the primary factors that have impacted growth. While brand preference does not seem to be the primary reason for the problems, these issues, if they continue could have lasting impact on market shares.”

Thereby, where Patanjali is headed in the fiscal FY19 will be keenly watched, and if the above mentioned factors not taken care off then Ramdev may see some impact on its Patanjali’s market share.

Baba Ramdev: To open over 500 Patanjali Paridhan stores across country this year