Ramdev has entered into toned milk segment apart from cow dairy. Patanjali’s toned milk is said to be cheaper by Rs 4 compared to rivals. 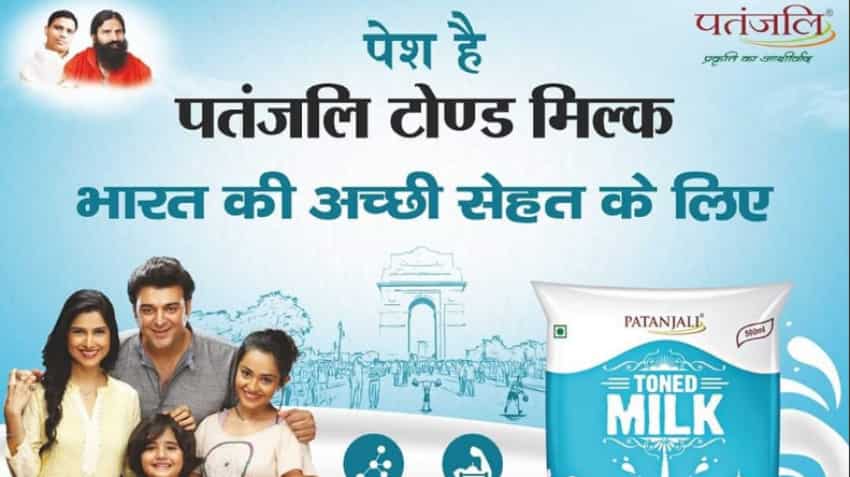 Baba Ramdev has done it again! Ramdev has just taken on nimbler and bigger rivals and that too with an in-your-face attitude. Truly, when it comes to creating a price war and intensifying competition, there is no one like Baba Ramdev. This time, Ramdev has stepped in to take on the largest dairy businesses in the country namely, Amul and Mother Dairy after they both increased the price of milk by Rs 2 recently. Now with Patanjali, Ramdev has entered into toned milk segment. Once again proving the point of offering cheapest products, Patanjali’s toned milk is said to be cheaper by Rs 4 compared to rivals. What is interesting is that, Patanjali’s affordable and all ayurvedic product has gained popularity in a short span of time in FMCG sector. Citizens also have accepted Patanjali products with open arms. Hence, now cheaper milk will further create pressure on Amul and Mother Dairy.

Now, one litre toned milk at Patanjali is priced at Rs 40. The product will be sold in markets like Delhi-NCR, Jaipur, Pune, Mumbai, Nasik, Aurangabad and some parts of Haryana as well. The prices have come into effect from Tuesday onward.

Patanjali via its Twitter account on Monday said, “Presenting Patanjali Toned Milk for good health of India. From tomorrow onwards, we are launching together from Delhi to NCR area to Haridwar and from Jaipur to Haryana, Maharashtra. This toned milk will be cheaper by Rs 4 than Amul and Mother Dairy.”

Patanjali made it clear last year only, about its intention to give stiff rivalry to Amul and Mother Dairy, by entering the dairy product business in September 2018. Ramdev launched cow milk which has now reached over 1,50,000 outlets especially in Delhi-NCR region.

Last week, Mother Dairy increased the consumer price of their poly pack milk variants in Delhi NCR. The company increased 1 litre pack of milk by Re 1 and the 500 ml pack by Rs 2 a litre. Currently, in the national state, Mother Dairy toned milk is priced at Rs 42 per litre, higher compared to Patanjali’s newly launched milk product.

Similarly, even Rs 2 per litre price has been increased on all six Amul brands being sold in major markets of Delhi-NCR, Gujarat, West Bengal, Kolkata, Uttaranchal, Maharasthra and other states, the GCMMF said. The revised price of 500 millilitre (ml) pack of 'Amul Gold' in Ahmedabad is Rs 27, 'Amul Shakti' is at Rs 25, 'Amul Taaza' is at Rs 21 and 'Amul Diamond' is at Rs 28.

Reason for hikes in milk prices by Mother Dairy and Amul has been done due to rise in production cost. While these two companies struggle, Baba Ramdev is looking to make the most of the situation.