Minister of State for Civil Aviation Jayant Sinha said that airfares in India are about Rs 4 per kilometre, less than what it costs to travel in an autorickshaw. He said the government is working on a revival package for the industry, the contours of which should certainly involve offering a lower cost environment for all stakeholders. 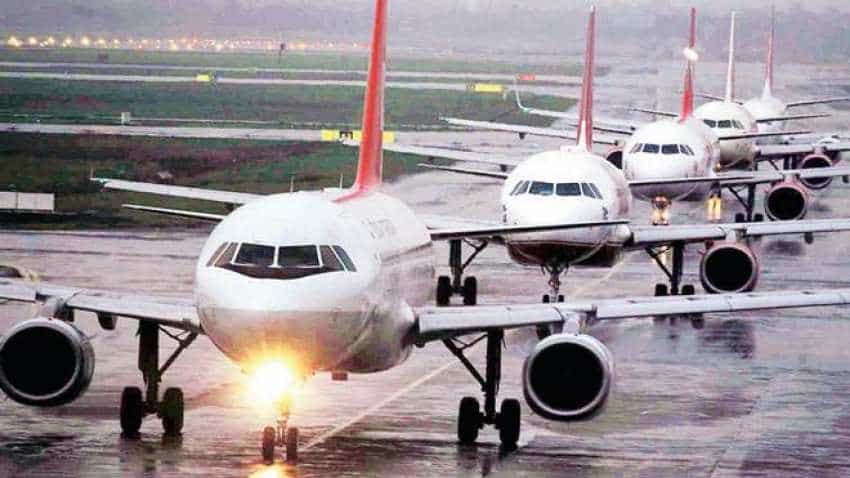 Each carrier competes with other to attract passengers, many times at fares which are below cost, sacrificing the profits. Image source: Reuters
Written By: Sindhu Bhattacharya
RELATED NEWS

The country's booming domestic aviation market presents a strange contradiction. Passenger traffic has been growing in double-digits for 50 months now, making India one of the fastest growing markets. But the airlines are still struggling to make money as the country has one of the lowest airfares in the world coupled with one of the highest cost frameworks.

Each carrier competes with other to attract passengers, many times at fares which are below cost, sacrificing the profits.

Minister of State for Civil Aviation Jayant Sinha said that airfares in India are about Rs 4 per kilometre, less than what it costs to travel in an autorickshaw. He said the government is working on a revival package for the industry, the contours of which should certainly involve offering a lower cost environment for all stakeholders.

The Ministry of Civil Aviation, along with the Ministry of Petroleum, has repeatedly petitioned the GST Council for bringing aviation turbine fuel (ATF) under the goods and services tax (GST) so that input tax credit for the fuel is made available. But this request has not been accepted till date. The logic is, if ATF is brought under GST, auto fuels (petrol and diesel) should also be included and the Council currently doesn't have unanimity over this issue.

Fuel accounts for around 40-45% of the operational cost of an airline and in India, jet fuel attracts very high taxation. This makes the operational environment for airlines all the more challenging now when global crude prices are moving north.

Besides, the rupee's depreciation is also compounding the airlines' woes. In five months, the rupee has weakened by over 12% to almost 72 against the US dollar and crude prices have surged by over 50% in a year to around $80 per barrel.

The worst hit are full-service airlines like Jet Airways and Air India, whose cost structures are higher compared to the low-cost carriers (LCCs) such as IndiGo, SpiceJet and GoAir. The first quarter results for the listed airlines show how difficult the situation is.

Jet Airways posted a loss of Rs 1,323 crore on a total income of Rs 6,066.91 crore amid deepening concern of the airline slipping into a precarious financial position. IndiGo's net profit fell 97% to Rs 28 crore from Rs 811 crore a year earlier. Aviation consultancy CAPA has forecast $1.65 -1.90 billion loss for India's airline industry in the financial year 2019, up from its previous estimate of $430-460 million, on rising fuel prices.

That India is a tough place to do business for airlines has also been underlined by Alexandre de Juniac, director general of the International Air Transport Association (IATA). "While it is easy to find Indian passengers who want to fly, it's very difficult for airlines to make money in this market. India's social and economic development needs airlines to be able to profitably accommodate the growing demand. We must address infrastructure constraints that limit growth and government policies that deviate from global standards and drive up the cost of connectivity," Juniac said

IATA has sought zero rate GST for international travel, providing full input tax credit for the domestic uplift of jet fuel and reducing excise duty on this fuel. It has also pointed to continuing infrastructure roadblocks, saying the Navi Mumbai airport, for example, should become operational at the earliest.

India's busiest metro airports are choked and though capacity addition plans are underway, they are behind the demand curve. Civil aviation minister Suresh Prabhu has announced a plan to build 100 new airports with an investment of $60 billion in the next 10-15 years. 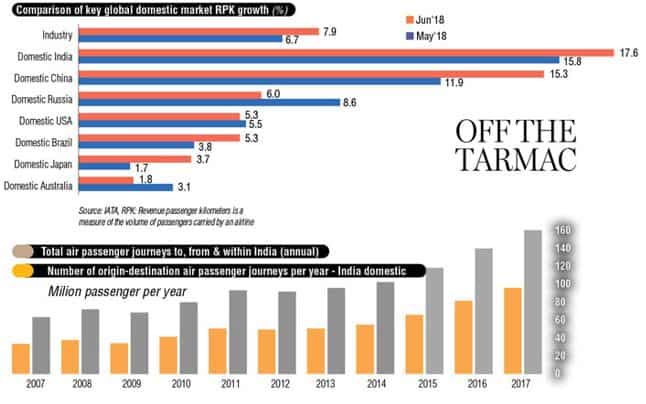 Alongside high costs, rock-bottom fares are hitting airlines' profitability. IndiGo has announced a sale for a million seats spread over the peak festive flying season and into the lean season, at less than a 1,000 rupees.

Jet Airways is offering 2.5 million seats at discounted fares and the other airlines have also launched their own versions of a sale. Such unsustainable fares have put pressure on the yields, or earnings from each passenger.

IndiGo's yields have remained stagnant now for nine straight quarters. Jet Airways has seen yields decline successively in each of the last eight quarters while SpiceJet has also seen stagnant yields during the period.

"Indian airlines need a level playing field. Give us the same cost structure, same cost base that is enjoyed by airlines across the world and then let us compete with the foreign carriers," SpiceJet CMD Ajay Singh said.
The airline was planning low-cost long-haul operations, which have now been put on the back burner, likely due to cost escalation.

Not only unbelievable fares, airlines have also been adding capacity faster than demand – the combined order book till now is close to 1,050 aircraft. With capacity outstripping demand, costs spiralling and inability to raise fares, India's airlines will continue to fight a losing battle. Unless, of course, the government steps in with tax sops for jet fuel and eases other input costs, and airlines are brave enough to start raising fares.