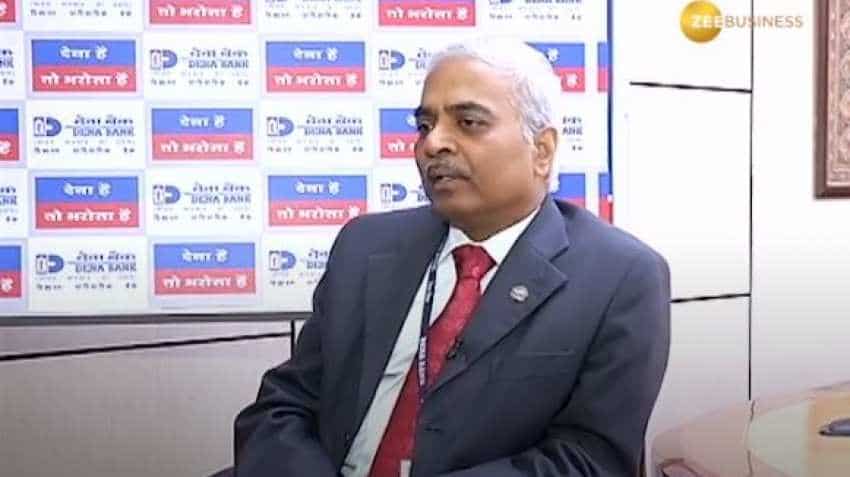 Karnam Sekar said the amalgamation will not lead to any job loss because several people, not only in these three banks but across the banking sector, will reach the superannuation/retirement age in the next 2-3 years. Image source: Zee Business
Written By: ZeeBiz WebTeam
RELATED NEWS

Karnam Sekar, MD and CEO, Dena Bank during an interview with Swati Khandelwal, Zee Business, said, “we have adopted three processes to bring down the corporate NPA and they are NCLT, the sale of assets to ARC and settlement through OTS. Referring to the proposed amalgamation of three banks, Dena Bank, Bank of Baroda and Vijaya Bank, he said it would result in the creation of the second-largest bank, next to SBI. Excerpts:

Q: The merger plan of Dena Bank with Bank of Baroda (BoB) and Vijaya Bank has been announced and under such a situation I would like to know about the progress that has been made on merger and a timeline by which the entire process will come to an end? Also, let us know about the challenges that are being faced in the process?
A: This is not a merger, it is an amalgamation of three banks into one and this amalgamated body would be the second-largest bank in the country after State Bank of India (SBI). Under the process of amalgamation of the three banks, which was announced by the government of India, all the MDs and EDs (of three banks) put together have formed a steering committee to look after the various phases of amalgamation and things that should be done. In addition, we have also formed certain sub-committees under the steering committee, which will be taking care of independent functional areas like committees to deal with HR issues, credit issues and IT related issues among others. Each of these committees is meeting at regular intervals and the steering committee is also meeting once in a week or in 10days and we are taking it forward.

Q: Will this merger lead to job losses?
A: No. The amalgamation will not lead to any job loss because several people, not only in these three banks but across the banking sector, will reach the superannuation/retirement age in the next 2-3 years.
Besides, the presence of Bank of Baroda and Dena Bank in North, mainly in Maharashtra and Gujarat, and Vijaya Bank in South can be termed as a perfect rationalisation of the business. This amalgamation is a perfect sink of the business and therefore we don’t see any need for a reduction in the number of branches or the reduction of the workforce.

Q: Dena Bank has launched ‘Mission Dena 9999’ to reduce the total NPA level. Where does it stand, in terms of progress, after two months of its implementation?
A: I faced two major tasks after joining Dena Bank and they were strengthening Dena bank and to complete the amalgamation process in a smooth way, which is going on. Now, the question arises is how to make it strong? See, there are several positive points in Dena Bank but NPA is one of the biggest negatives for the bank, especially in corporate credit NPAs, and the programme called ‘Mission Dena 9999’ was launched with an aim to curtail/reduce it (corporate NPAs). The programme aims at reducing its total NPA level from Rs16,000 crore (approx) to less than Rs10,000, i.e., at least the largest four-digit number by March 2019. There is no time limit to achieve it, but March 2019 is the earliest target.

NPA is not something that can be resolved in an overnight. It takes time and needs a lot of groundwork to be done. We have sorted out the groundwork and found three ways to address the problem and they are:
I.    To go to the last stage for those accounts that have been sent to NCLT and resolve them.
II.   To push good candidates for ARC sales at places the NCLT is not able to give a solution.
III.  To settle small accounts by sitting with the customer.

Dena Bank, which is a small bank, has small accounts in major corporate accounts. And, two to three big accounts have reached an advanced stage of resolution in NCLT and have stitched the penalty met stage and will be resolved may in a month or two months’ time. We are trying to get at least Rs1,300-1,400 crores from these accounts in the next three-four months.

When it comes to ARC sales than last month we have conducted an ARC auction and will have one more auction in the ongoing month (December 2018). We will also have one or two more auctions in next quarter. The bank is going to the market with ARC sale and we are expecting an additional Rs1,200-1,300 crores through this sale.

OTS broadly includes upgradation at branch level and cash recovery and we are expecting a recovery of around Rs3,000-4,000 through this mechanism.

These mechanisms are something through which we are targeting a recovery of around Rs6,000 and this recovery can help us to reach the mark of Rs10,000 but can’t disclose a timeline by which we will be able to meet the target.

Dena Bank is listed under the Prompt Corrective Action (PCA) majorly for two reasons and they are:
I.    For incurring losses continuously for three years
II.   Three buckets have been formed under the PCA framework and they are 6-9, 9-12 and beyond 12. We, Dena Bank, is standing in the second bucket of NET NPA (9-12) and are trying to bring it into the first bracket or if possible than out of the bucket.

We are working for that and if all goes well then, I think we will be able to come out from PCA very soon.