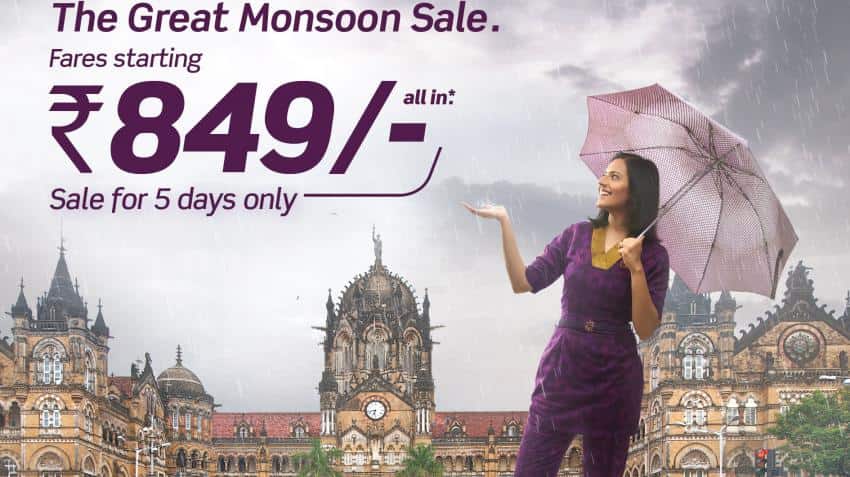 Bookings under the sale will be open from today, June 13 to the midnight of June 17, the airline said for travel between June 28 and September 20. Image Source: Vistara/PR
Written By: ZeeBiz WebTeam
RELATED NEWS

Full-service carrier, Vistara on Tuesday announced its ‘The Great Monsoon Sale’ which offers all-inclusive fares starting at Rs 849 for Economy class. The airline said its Premium Economy fares would begin a little higher at Rs 2099.

Bookings under the sale will be open from today, June 13 to the midnight of June 17, the airline said for travel between June 28 and September 20.

“With Vistara, the fares are always what-you-see is what-you-get, with no hidden fees and fuel surcharges,” the airline added.

“Vistara’s ‘The Great Monsoon Sale’ gives an opportunity to travellers to plan their travels in advance and  fly to some of India’s favourite holiday destinations such as Goa, Port Blair, Leh (Ladakh), Jammu, Srinagar, Kochi, Guwahati, Amritsar, Bhubaneswar, as well as metro cities such as Delhi, Kolkata, Mumbai and Bengaluru,” the airline said.

The Rs 849 economy class travel will be applicable for air travel between Jammu and Srinagar. Travel from Guwahati to Bagdogra would cost Rs 899; while a Delhi-Mumbai flight would cost Rs 2,199.

Other one-way fares of domestic destinations by the airline has been listed below. 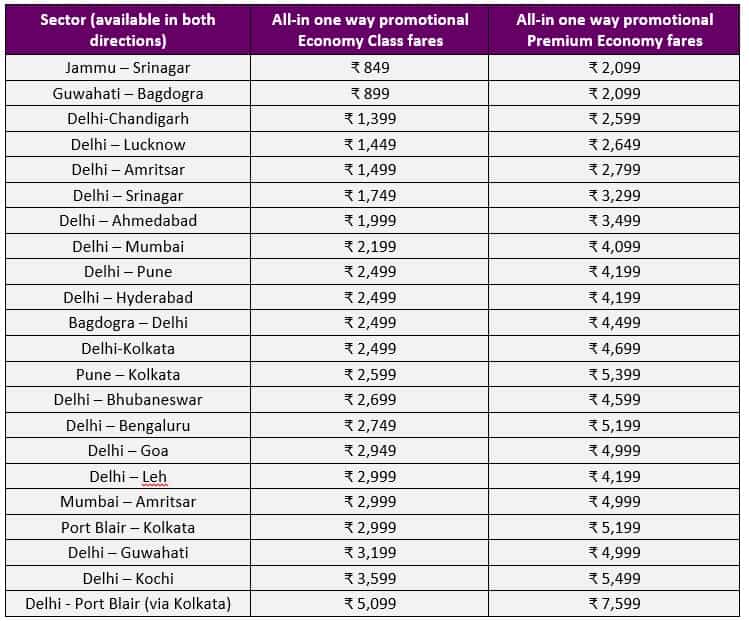 “Seats under this offer are limited and are available on a first-come, first-served basis and the best fares are available for customers willing to make their travel plans at least 15 days in advance,” Vistara said.

Additionally the airline said that travellers to and from Mumbai and Srinagar would get to experience travel in the company’s new Airbus A320neo.

“Travellers choosing to fly to/from Mumbai and Srinagar (to/from Delhi) on select flights will also get to enjoy exciting new features onboard Vistara’s new Airbus A320neo Some of the in-flight enhancements aboard the new aircraft include mood lighting, greater comfort of softer leather seat upholstery, improved seat cushions, as well as new boarding and landing music in genres including Blues, Jazz and Soft Rock Instrumentals - all designed to give a whole new dimension to the ‘new feeling’ of flying,” Vistara said.

The company said travellers can avail of bookings via its website, Vistara’s iOS and Android mobile apps, at Vistara’s Airport Ticket Offices (ATOs), through Vistara’s call centre, and through Online Travel Agencies (OTAs) and travel agents. Vistara’s GDS partners include Abacus, Amadeus and Travelport, enabling customers to book via all major channels.