Here is a good news for the car lovers, bookings for Tiago JTP and Tigor JTP car is open and they will be available from next month itself. Best part is, you can place an order through a down payment of Rs 11,000 only. The select dealerships are in Kolkata, Delhi, Gurugram, Chandigarh, Lucknow, Bengaluru, Chennai, Coimbatore, Hyderabad, Pune, Ahmedabad, Mumbai, Kannur, Thrissur, and Kochi. 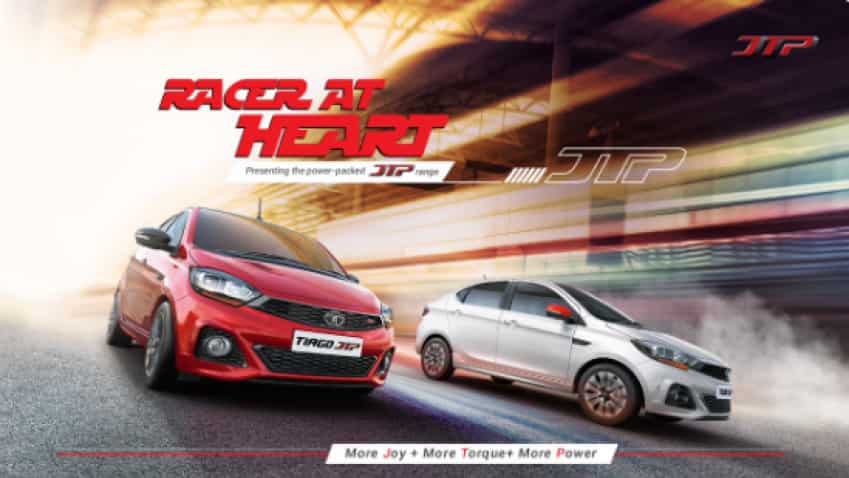 The passenger vehicle market in India is set to be action-packed as the year winds down! While many cars have been launched recently, Tata Motors has sought to surprise by unveiling 2 racing cars! Yes, these sports cars are Tiago JTP, Tigor JTP. Both these cars are the result of an association of Tata Motors with a Tamil Nadu firm that marks its entry into 'white-space' of racing cars.

Here is a good news for the car lovers, bookings for Tiago JTP and Tigor JTP car is open and they will be available from next month itself. Best part is, you can place an order through a down payment of Rs 11,000 only. The select dealerships are in Kolkata, Delhi, Gurugram, Chandigarh, Lucknow, Bengaluru, Chennai, Coimbatore, Hyderabad, Pune, Ahmedabad, Mumbai, Kannur, Thrissur, and Kochi.

When it comes to the price, hatchback Tiago JTP comes at Rs 6.39 lakh, whereas sedan Tigor JTP is priced at Rs 7.49 lakh.

In case you want to know, the company said that In comparison, the 'normal' top-end Tiago comes at Rs 5.5 lakh and the top model of the Tigor carries a price tag of Rs 6.5 lakh.

In fact, this is a white-space in the domestic automotive market as there is no racing car OEM now as the models available are "aftermarket accessorisation". the company added.

When it comes to the feature the two launches are powered with the 1.2 litre turbocharged new generation Revotron petrol engine, which is re-engineered to deliver 114 PS power and 150 Nm torque, which will be enabled to drive in multi-drive mode and can attain 0-100 kmph in flat 10 seconds as per the source.

As per the source Tata Motors said yesterday that the "Branded as Tiago JTP and Tigor JTP, these performance cars are built at Tata Motors' Sanand plant, with engineering and technical partnership with Jayem Automotives, which has recalibrated the engines to enhance the output and performance."

Tata Motors and the Coimbatore-based Jayem Automotives came together in March 2017 with the equal joint venture  called JT Special Vehicles to create a range of accessible racing cars.

Mayank Pareek, president of passenger vehicles division, Tata Motors said that "The objective is not to make money immediately or eye volumes."

He added, "But what we are doing under this JV is offering ready-to-drive performance vehicles unlike the present system of getting it retrofitted and recalibreated by third-parties."

Continuing he added "JTP is not a product programme but more of a marketing programme. We are sure it will lend a huge support to the main Tata Motors brands. What we want is to create a range of accessible race cars, which can be used for daily commute as well, thus the focus on accessibility."

Further describing about the marketing strategy  Pareek said that they have already identified 30 dealerships across the country for sales and marketing.

And also said that "there is no ready-made market per se and thus no competition to begin with."

By comparing the compact SUV space from past year Pareek said that, "But look at the compact SUV space today. A few years ago this was zero. But today, it is as big as 20 per cent of the total car volumes. So, there is a large market to be created. And we hope to do that with JTP and hope the JTP cars also makes a halo effect on the main Tiago and Tigor brands."

Later he added "Jayem is known for its engineering prowess and they will recalibrate the engines, which are 1.2-litre turbocharged new generation Revotron petrol powertrains. Jayem is also known for its phototyping designs and concepts."

Further he noted F1 racer Narain Karthikeyan and national award winning racer J Anand and other racers have been on board from the planning to execution level with him."

He also claimed that, the cars come with better torque as the power-train is enhanced, and better suspension and sound with double barrel exhaust giving the special sound.