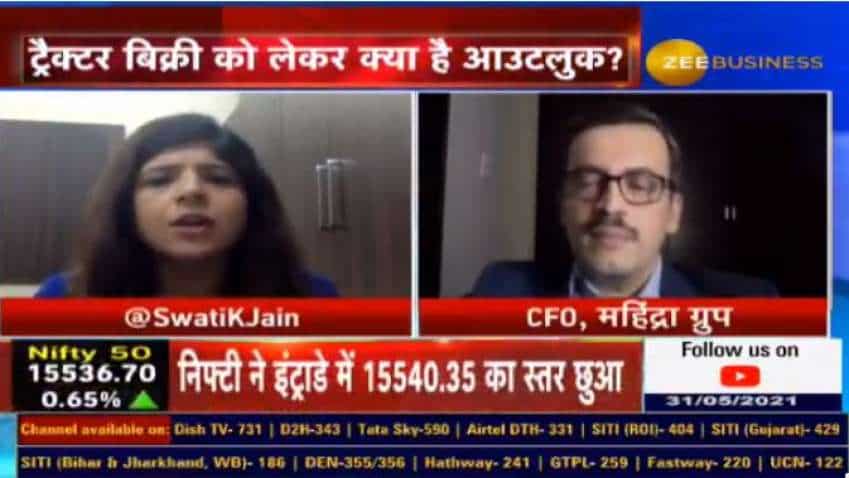 "Revenue growth has been very strong in the auto and farm sectors. Secondly, if seen at the operating level and the exceptional items then there is also a good increase in profitability," Manoj Bhat says
Written By: Jitesh Kumar Jha
Edited By: ZeeBiz WebTeam
RELATED NEWS

Q: Revenue and operational numbers have beaten the street estimates. What led to this and do you think that this run-rate is sustainable over the next four quarters to come?

A: If we will have a look at the numbers then there are two to three points. Revenue growth has been very strong in the auto and farm sectors. Secondly, if seen at the operating level and the exceptional items then there is also a good increase in profitability. So, our capital allocation that was initiated is almost towards the end. Lastly, the cash flow generation has been quite robust. So, if we have a look at the momentum then it was quite strong in the fourth quarter in both of the sectors.

If we have a look at the Group of Companies then their performance has also been good. But, if seen from the current perspective, then we have seen a lot of lockdowns in May and Corona has an impact. However, we quite positive that as soon as improvement in the situation begins from June and going into July, August and September quarter, I think the demand will be quite steady and return and we have seen some niche signs in some areas. The uncertainty is that June is going to be a critical month and what development happens in terms of local lockdowns that we are seeing. On the basis of the same, we will get clear visibility by June end. But if a broader picture is seen based on the fourth quarter then we are expecting that the strength will resume in the next two to three months.

Q: You took an exceptional loss of Rs 840 crore this time. Tell us more about it and are there any more one-offs expected in this financial year?

A: As I said earlier, the capital allocation that was decided about four quarters back then a lot of clean up has been done from it. So, most of the clean-up has ended. Going forward, we expect that the number will not be a significant one. If seen in this, the biggest item is Ssangyong and we have treated it as a discontinued operation and all the update related to it is available in the public domain. I think the bankruptcy procedure is continuing there. So, I think, the capital allocation decisions, which were supposed to take in regard to it and the rest of the international subsidiaries, have been taken. And, going forward, it seems that the exceptional items will reduce a lot due to which the reported profit will increase a lot.

Q: The board has approved the merger of the electric vehicle subsidiary of Mahindra Electric Mobility Ltd (MEML) with M&M. Tell us more about the significance of this merger into the company and benefits ahead? Also, do you think that at some point in time, you will demerge it and get it listed?

A: Currently, we have two to three plans. Firstly, we have to plan a lot in the EV Segment. We have created an investment plan of Rs 3,000 crore in the segment over the next three years. I think that the EV will turn into our core over a period of time and in it, we have done strategy mapping in which it will open with the last mile mobility and how the EV will be mapped out in the four-wheel. Accordingly, we felt, the segment that will turn core should stay with us in the main company. In the future, options are open for the way in which we will think about it but the current plan is that the investment will be made by the parent company and it has been launched. With this, there is a benefit that synergies will match and both the companies, Electric as well as Mahindra & Mahindra will be benefitted from it. In future, as it progresses, we will look at the ways to monetize it and how to tap it.

Q: What is your product launch pipeline for FY22 and what are the segments in which you will focus? Also, tell us about your CapEx plan of Rs 12000 crore that has to be spent over the next 3 years, give us a split and a sense as to when can we start reaping the benefits of investment in each vertical.

So, this is the break-up of Rs 12,000 crore. Currently, there are different products in the pipeline like we are getting a lot of interest in the XUV700 and it will be launched in the second half or towards the end of the year. At the same time, the new Scorpio launch is also scheduled towards the end of this year in the March-April time frame. So, these launches are year term and after that about 20 odd other launches have also been planned across multiple segments. The broader strategy is that we will focus on the core XUV, core Mahindra and that is where all the CapEx is meant.