Maruti Celerio is one of the best selling models in its segment, therefore the company is working on its next generation variant which may come up with an evolutionary design theme. 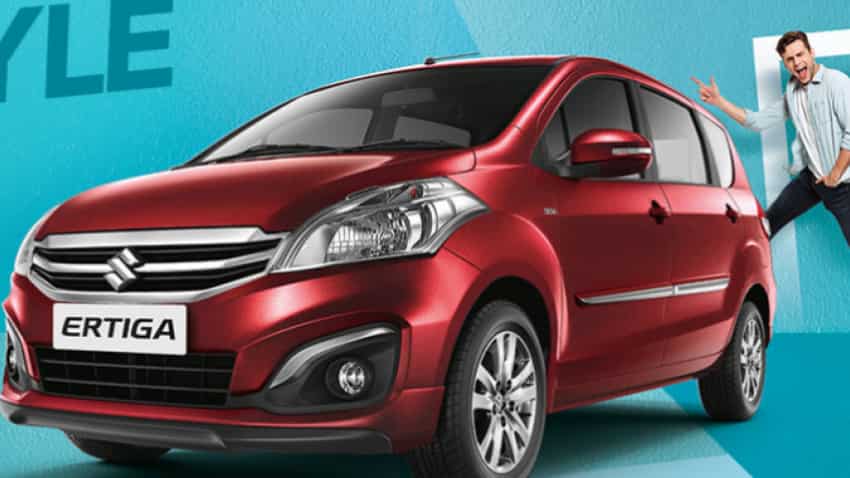 A new variant of Ertiga which is likely to be named as Ertiga Cross is also expected to be introduced. Image source: Official website
Written By: ZeeBiz WebTeam
RELATED NEWS

India’s largest car maker Maruti Suzuki is set to introduce new models in those segments where they are currently not present, besides updating its old products as the company is gearing up to meet new norms related safety and emission. It is set to introduce a new gen Alto, the electric variant of the highly popular WagonR and Ertiga Cross, among others. Here is all that's coming for you:

Maruti Suzuki has started work on the next generation Alto to transform it completely from the current model. The new Alto is likely to get a similar look to that of Renault Kwid, with SUV design theme. Sporting good ground clearance, the Alto is expected to take design inspiration from Future S Concept. The upcoming model is also expected to have features like touch screen infotainment system, dual airbags, ABS with EBD, and speed sensor alert, besides having stronger body to meet the new safety norms. Further, the new car's engine options would be a 1.0 or maybe turbocharged petrol engine with manual and AMT gearbox options.

With government policies favouring electric vehicles for energy and environmental reasons, the segment is coming up with a lot of potential, but available models in auto market not accessible for most of the people, therefore Maruti Suzuki is reportedly toying with the idea to join the EV segment. The company's first product which will be given the thrust will be WagonR EV. Maruti Suzuki is currently road testing JDM-spec model of Wagon R EV in India. Under this test, the company is gathering requisite data to see how battery perform in Indian climate and road conditions. This would help the company to develop a better battery pack for the WagonR EV. The company is yet to reveal specification of the battery pack as its launch may take place next year.

Maruti Celerio is one of the best selling models in its segment, therefore the company is working on its next generation variant which may come up with an evolutionary design theme. The new Celerio is likely to take design cues from the Future S Concept. The new car's interior might also undergo significant changes. Expected to flaunt lots of features, the next generation Celerio could get an EV powertrain similar to the Wagon R. This powertrain would be developed with help from Toyota, and the new car is also expected to get a petrol engine with manual gearbox.

A new variant of Ertiga which is likely to be named as Ertiga Cross is also expected to be introduced. The upcoming model will be sold through Nexa dealerships. The new Cross model of Maruti Ertiga is also expected to show new features including new front grille with a black finish along with new front and rear bumpers. It is expected to come with new alloy wheels on the Cross, and also would be available only in 6-seater model, beside flaunting some premium features. The company, however, would retain the Ertiga with the same engine with manual and auto gearbox options.

Maruti Suzuki has introduced the new generation of Jimny in global markets last year. The company is likely to introduce the small-offroader in India as it may compete against Mahindra Thar. New Jimny's key feature would reportedly be similar to Mercedes Benz G-Wagon inspired design theme, but interiors would be completely new. Suzuki Jimny is likley to get a new three-spoke multifunction steering wheel with the new instrument cluster. The centre console would feature a touch-screen infotainment system with Apple CarPlay and Android Auto besides flaunting climate control. The engine options would include petrol engine besides four-wheel drive system.