Kawasaki Vulcan S: A seriously good bike, but there is a catch

The Vulcan S certainly doesn’t take the traditional cruiser approach. There’s no chrome to be seen and everything is either in a shade of matt or gloss black. Its unusually shaped, upside-down triangle headlamp adds some individuality up front and the large tank gives the bike a decent sense of presence 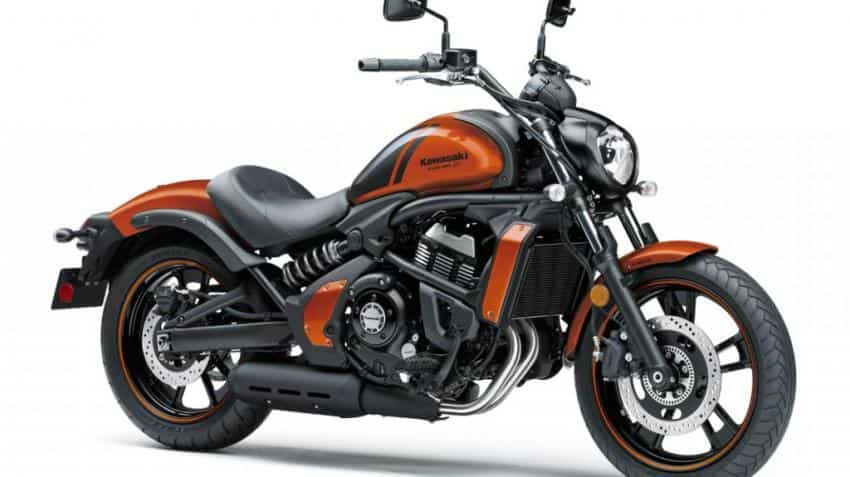 The Vulcan S certainly doesn’t take the traditional cruiser approach. There’s no chrome to be seen and everything is either in a shade of matt or gloss black. Its unusually shaped, upside-down triangle headlamp adds some individuality up front and the large tank gives the bike a decent sense of presence. The rear section, however, is quite unremarkable, both in terms of sheer size and visual drama. The angle that catches my eye most is the side profile, with a long and low stance accentuated by a (right) side-mounted monoshock and a single-barrel exhaust running flat along the base of the bike. Machine-polished detailing on the top of the engine cases and a similar finish on the valve covers adds a playful bit of shimmer that is clearly visible through the tubular frame.

What stands out, as it tends to on most Kawasaki bikes, is a sense of high quality and solid build. The instrument cluster features a big analogue tachometer sitting atop a digital screen that displays all the essentials. One appreciable and thoroughly useful feature is Kawasaki’s Ergo-fit system that allows you to adjust the riding position according to your need. Its matte finish looks good, it’s going to be a pain to maintain, as the numerous small scratches and blemishes on our 1,700km-old test bike pointed out.

The Vulcan’s its 649cc, eight-valve, liquid-cooled parallel-twin engine packs a punch, but power delivery is thoroughly linear, with quite an eager bottom end from as low as 2,000rpm. Cleverly selected gearing allows for good tractability you can crawl over speed breakers in second gear, and fourth is good for anything above 45kph. The six-speed gearbox itself has a heavy feel but slots with decent precision and even allows the occasional clutchless upshift. Rev it out and performance is strong, with the bike crossing 150kph quite easily; the real challenge is being able to hang on, due to the riding position and lack of wind protection. Also missing is an involving soundtrack  the parallel-twin has a somewhat deep, but quite muted note and regardless, this is not an engine renowned for its aural quality.

Despite the work gone into the motor, there’s no escaping the Vulcan S’ sports bike roots and the spec sheet is telling of this. The Kawasaki’s peak torque of 63Nm is generous, no doubt, but it arrives at 6,600rpm which is un-cruiser like.

Steering effort is pleasantly low, as is the 705mm tall seat and, aside from the aforementioned shape of the handlebar, this is quite an easy and approachable motorcycle to ride. If anything, the seat itself is nicely shaped, but it is a bit hard and discomfort begins to settle in after an hour in the saddle. The easy low-speed manners continue as the speeds increase and the Vulcan comes across as stable and planted. Braking performance from the single disc at either end is confident and perfectly up to the task, with ABS mindfully lurking in the background. Ride quality is quite absorbent too and the Vulcan doesn’t get beaten out of shape by rough surfaces, within reason, of course.

Here are the details: 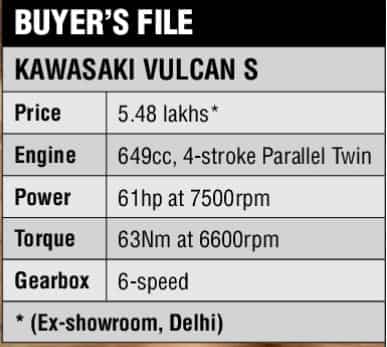 The Vulcan S is a highly competent motorcycle and, at Rs 5.44 lakh (ex-showroom), it costs Rs 19,000 more than the Street 750. This is reasonable considering the higher levels of quality and finish, not to mention the significantly better tyres than the MRF rubber on the Harley. But, while the Vulcan’s abilities impressed me over the 200-odd kilometres that we spent together, I don’t recall a single smile breaking out inside my helmet. Basically, the Vulcan S is a seriously good motorcycle, but perhaps one that takes itself a bit too seriously.