Jawa was a passion for those who used to buy the motorcycle and we will try to maintain that: Anand Mahindra

Jawa is a brand and we tried to make the right product by understanding the expectations of the customers, said Anupam Thareja, Co-founder, Classic Legends. 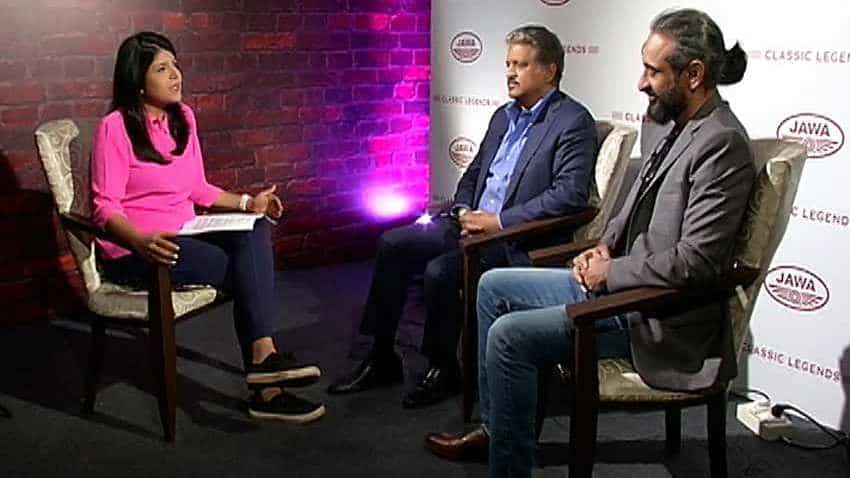 I think that we have moved on the right track and it was hinted by public response during the dummy launch, said Anand Mahindra.

The iconic Jawa bike is back and Mahindra & Mahindra has made it all possible. The launch was done in a glitzy manner on Thursday and the fans will be able to book and get the chance to grab one soon. Anand Mahindra, Chairman, Mahindra Group, and Anupam Thareja, Co-founder, Classic Legends, in an exclusive interview with Swati Khandelwal spoke about its brand outlook, technology and dealership aspects. Edited Excerpts:

Q: Mr Mahindra, people went crazy in their effort to grab the opportunity to see the new avatar of Jawa after it was announced the bike will be back. Are you happy and satisfied with how the final product has turned out?

Anand Mahindra: I am. You were there at the launch of the dummy. What do you think about the product? They looked different, I think, it is love at first sight. The product was launched at Mumbai’s Mehboob Studio and the reaction of media justifies that it was love at first sight. The brand, Jawa, was a passion for those who used to buy the motorcycle and we will try to maintain the passion. In fact, we will try our best to take this story forward and it is his, Anupam Thareja’s responsibility to script the story. Thareja, who looks like a biker, is an investment banker, private equity player as well as a person who played a key role in the revival story of Royal Enfield, which is today growing from strength to strength.

Q: The product is ready and the two-wheelers market has also bounced back and the number of two-wheeler companies are indicating that. Your strategy is a different one as you are planning to plug into the niche instead of going to the mass market.

Anand Mahindra: I think that we have moved on the right track and it was hinted by public response during the dummy launch.

Q: Anupam, what is going to be special in these bikes to attract people in terms of technology, which goes beyond its iconic beginning and its legendary look and feel?

Anupam Thareja: You have posted the right question as a product starts with its brand, however, the product should justify the brand in itself. Failure to justify the commitment to the brand is negative for both, the brand as well as its lovers.

It is a beautiful brand and is being launched with a promise to its customers that we will bring a perfect product that will bring back the beautiful memory that they had with Jawa. We tried our best to justify the product by its brand name in terms of technology, simplicity (in terms of how to handle and the way it rides), power and efficiency.

You must have seen at the launch program that the engine has been designed by engineers who are from Italy. Secondly, the person who has designed the bike and had Jawa with himself is a son of the owner of the company. He is a third generation engineer in himself.

Jawa is a company with light assets and will mainly focus on marketing, consumers and the ways to make them happy so that we can tell them that the product goes in line with its brand name.

Q: Mr Mahindra, even you have a similar thought process in which your products are able to beat the competitors. Do you think that the three launches, Jawa, Jawa 42 and Jawa Perak, will be able to pull customers and justify themselves?
Anand Mahindra: We have worked a lot on the quality, something on which a brand or product is judged. In fact, we always had a discussion on the quality aspect of the product during our meets as we know that you are going to be judged by the quality. It is a machine, not a picture that is beautiful and can be placed on your wall, and should work as it will be used when you are travelling.

Q:  The motorcycle will be manufactured and sold in India but what is your outlook on its international sales?
Anand Mahindra: Similar questions were posted on my Twitter handle. A person from Indonesia was saying that he has seen the motorcycle and knows about the brand. He was asking about the time by when it will be launched in his country? But, India is going to be in focus at present and the plans for overseas launch will be based on the response and success of the motorcycle in India, itself.

Q:  The best part of the launch is that you haven’t given up in the two-wheelers segment. What is your vision for Mahindra’s two-wheeler segment?

Anand Mahindra: I am going by the motto of my school, Lawrence School, Lovedale, which said ‘Never Give In’ and I am carrying on with it. When it comes to vision, we are planning to wear the blinkers that are used with horses and script a success story. And what we realised is that you have to give it to people who have the passion to make this work. Therefore, our focus on our two-wheelers is right now on ‘Classic Legends’.

Anupam Thareja: My first answer is related to the dealership and we had a similar idea of being interviewed after the launch and make people aware about the launch of Jawa and then advertise asking people to come forward and take our dealership. However, we took a different step for the purpose and asked our channel team to go in the market and inquire about the interest of people and place for the launch of the dealership. We asked them to just go in the market and find the interest level that people have towards the brand. I will be happy to inform you that about the kind of interest that people had. We found that people are reaching us with a demand to associate themselves with the brand, Java. Interestingly, this happened when we had nothing to show them like the motorcycle or its design or prices or power in terms of CC. But, 105 people have signed for a dealership with us and have also deposited refundable deposits to us that are lying in our bank accounts and also rented places for the purpose. Work on sixty-four dealerships will be completed by December 5 and the rest will be completed by December 31. And this interest was driven by the passion and power of the brand.

In terms of products, I will like to inform that a company that is starting its operation in the classic category of motorcycles is launching three different products in a go. This is going to be a different approach when seen at other companies of the same segment who launch a single product and stretch its periodicity to a great extent.

Besides, hope you are aware that we also have a different brand, BSA, and its launch will help us in developing a portfolio.