Ioniq, the brand under which the South Korean car maker sells electric, hybrid and plug-in hybrid cars, may be showcased at the Auto Expo in February 2018. Ioniq is presently being sold in the US, Europe and East Asian markets. 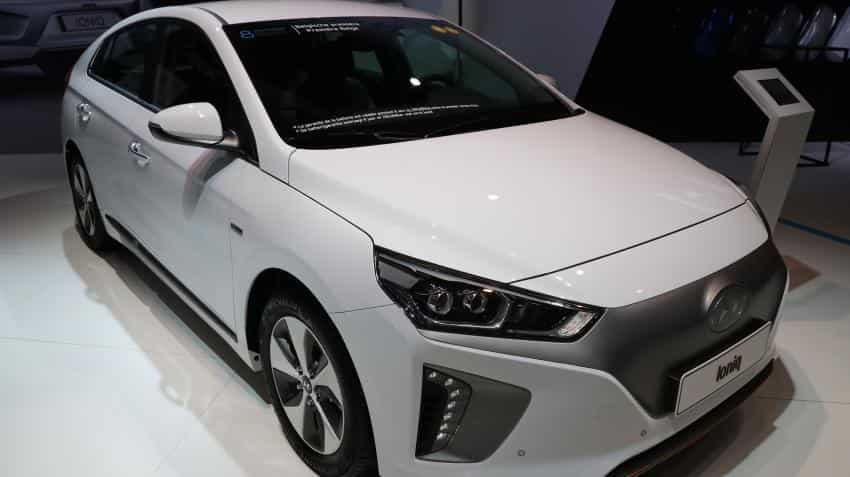 A Hyundai Ioniq is displayed during media day of the 95th European Motor Show for Cars and Motorcycles held in Brussels. Image source: IANS

Looking at Indian government's futuristic plan to have all-electric fleet in the country by 2030, Hyundai Motor India decided to seize the opportunity by introducing its electric vehicle brand Ioniq, said a Live Mint report.

The report said that Ioniq, the brand under which the South Korean car maker sells electric, hybrid and plug-in hybrid cars, may be showcased at the Auto Expo in February 2018. Ioniq is presently being sold in the US, Europe and East Asian markets.

“We will bring electric cars to India and will meet the timeline given by the Union government. Hyundai has the technology required for electric vehicles so we will bring them in all the segments we are present,” Rakesh Srivastava, director, sales and marketing, Hyundai Motor India, was quoted as saying by the Mint.

Srivastava did not make any comment on the introduction of the Ioniq brand in India, but added, "“We will surprise the market (when it comes to electric vehicles).”

Talking about Hyundai’s move, principal analyst, IHS Markit, Anil Sharma, however, told the paper, “Any manufacturer bringing these vehicles to India will essentially be showcasing models. As of now we don’t have a market for pure electric vehicles. Since the government is serious about pushing electric vehicles in the market auto makers are trying to hedge their positions.”

Citing the significance of Indian market for Hyundai, Srivastava, reportedly said the company will leave no stone unturned to maintain its volumes and most importantly maintain its profitability in India.

“Growth for Hyundai is not like a sine curve. We grow every year whether or not we launch new models. We are probably the only auto company where the growth in the top line is more than the growth in the volumes. Due to the capacity constraint in the Chennai plant our volumes did not grow as much as we would have liked,” Srivastava told the Live Mint.

It may be noted that Hyundai plans to manufacture 6.72 lakh vehicles in the current year, and stretch its capacity by another 30,000 units in the next year.

Maruti Suzuki will fight to get back to 50% market share: Chairman RC Bhargava