FASTag deadline 1st December! Here is how you can avoid penalty without buying coupon

FASTag deadline is 1st December. However, those who travel infrequently through the NH Toll Plaza, need not to buy FASTag in a hurry as hybrid lanes at Toll Plaza would continue to exist - enabling payment in cash. 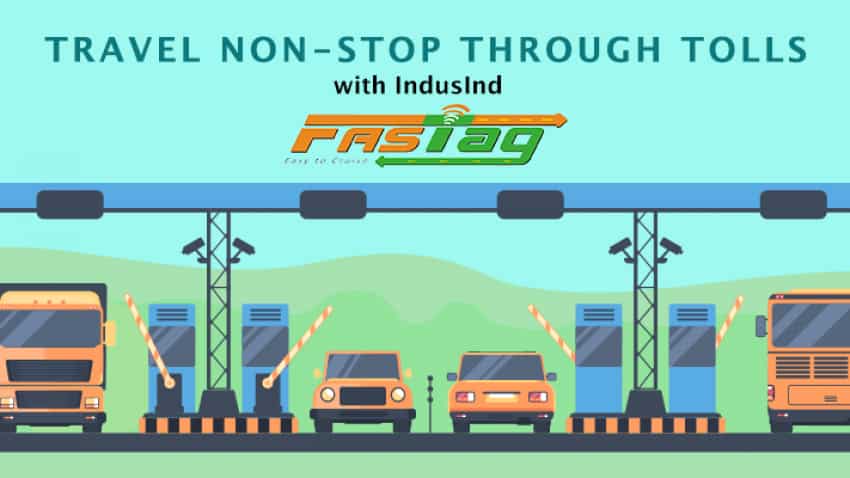 Govt declared in Lok Sabha that NH fee plazas shall be declared as ‘FASTag lane of the Fee Plaza’ by the 1st of December except for one lane on either side. Photo: Courtesy IndusInd Bank
Written By: ZeeBiz WebTeam
Edited By: Harish Dugh
RELATED NEWS

FASTag deadline is looming! The last date for getting a FASTag is 1st December. However, for those who travel infrequently on the National Highway Toll Plazas need not buy FASTag on an urgent basis as hybrid lanes at Toll Plaza would continue to exist - enabling cash payment. But beware! Those who avoid the hybrid lane and go through the 'FASTag Lane' will have to pay double charges. It became clear on November 21 when the Union Minister for Road Transport & Highways Nitin Gadkari replied to a question in the Lok Sabha. The Minister said that the hybrid lanes will not become extinct and they would continue to remain there to address the requirements of those who don't have FASTag.

FASTag is a useful tool for those who need to pass through the National Highway Toll Plaza on a regular basis. Light Commercial and Heavy Commercial vehicles will be the major beneficiaries if they buy FASTag. If they buy it from from NHAI's point of sale within the deadline of the FASTag, they will even get it free of cost as well.

In a written reply in the Lok Sabha on 21st November 2019 Gadkari said, "In order to promote seamless movement and to decongest the fee plazas and for promoting digital payments, Government has decided that all the lanes in the National Highway fee plazas shall be declared as ‘FASTag lane of the Fee Plaza’ by 1st of December 2019 except one lane on either side which shall be kept as Hybrid lane." Gadkari emphasized that the project should be implemented in the spirit of minimizing the waiting period at the toll plazas so that the users benefit in terms of fuel and time saving, while the social benefits in terms of reduced vehicular emission.

NHAI Chairman SS Sandhu assured the Minister that all issues are being addressed during the trial run initiated by NHAI, including a provision for issuing on-the-spot FASTags. He further stated that dedicated FASTag lanes have been identified, and are being enforced during the trial run. He informed the Minister that the progress of this scheme is being reviewed on a daily basis.