"Bajaj's Chetak, the e-scooter, will be launched only in January 2020", says Rakesh Sharma, Executive Director, Bajaj Auto Ltd. During an interview with Swati Khandelwal, Zee Business, Sharma said, "A series of new product launches will be seen as soon as the transition period from BSIV to BSVI will come to an end. Husqvarna's bikes will be launched in the first week of December and it will be available for retail sales from January or February". Edited Excerpts: 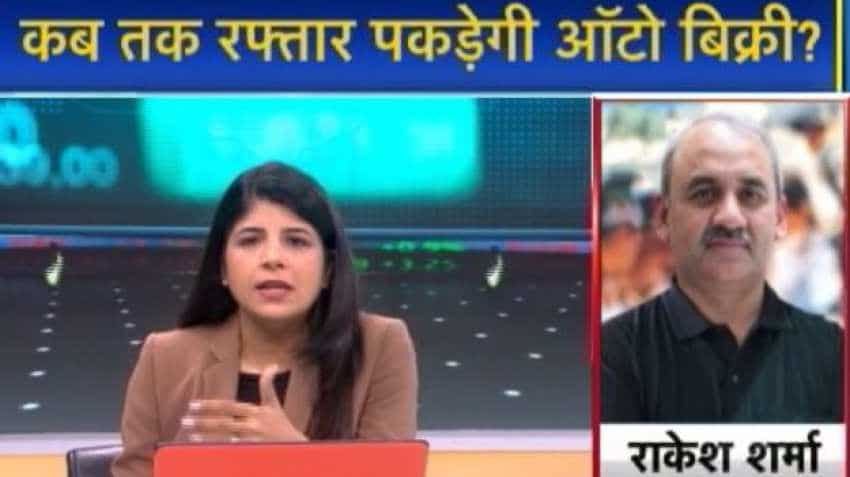 A series of new product launches will be seen as soon as the transition period from BSIV to BSVI will come to an end, said Rakesh Sharma, Executive Director, Bajaj Auto Ltd

"Bajaj's Chetak, the e-scooter, will be launched only in January 2020", says Rakesh Sharma, Executive Director, Bajaj Auto Ltd. During an interview with Swati Khandelwal, Zee Business, Sharma said, "A series of new product launches will be seen as soon as the transition period from BSIV to BSVI will come to an end. Husqvarna's bikes will be launched in the first week of December and it will be available for retail sales from January or February". Edited Excerpts:

Q: Bajaj's Chetak, the e-scooter, has travelled around 7,000 kilometres and have reached Pune by now. So, let us know about the initial response the scooter has got and what are your expectations with the product once after you commercially launch it in the market?

A: About 20 Chetak's started their journey from Delhi and have crossed cities like Agra, Jaipur, Udaipur, Ahmedabad and Goa before reaching to Pune. Each scooter has travelled 3,500 kilometres and on totalling the distance turns up to be 70,000 kilometres. The rally has been a good one and we didn't face any problem as they were easily charged with the normal household electrical system. The vehicle has performed well. It, Chetak, was brought back in the electric format with an objective to take an initiative in the electric business that is developing in the automotive sector and get the first-mover advantage and consumers are informed that Bajaj is standing on the forefront of electric vehicle segment. The electric change will take time as several things must happen in the segment. Secondly, we also wanted to send a signal to people associated with charging ecosystem, vendors and the government that we are ready. And, now it's their turn to respond as improvement is required to give a boost to the electric business. Our third objective is to see how the customers behave and find out the issues that prop up at the customers' end. This will help us to understand things. Thus, we have three objectives and they are early mover advantage, try to understand things and signal to the government and other stakeholders. But, it will be commercially launched in January 2020.

Q: Bajaj Auto has seen its highest ever retail sales in October. What are your expectations for overall Q3 and Q4, before BS-VI comes into force?

A: These two quarters, particularly the fourth quarter, are wonderful as it will be difficult to forecast how things will move in the period. November and December are high seasons due to festivities and then it goes down. The real impact of the transition from BSIV to BSVI will be seen in the fourth quarter. I can't predict the movement because the consumer can respond in two different ways and they are (i) they will go for only BSVI vehicles as they are based on the new emission standards and I am ready to pay little more for it and (ii) prices of BSVI is going up but the emission remains the same and BSIV is allowed and you can register it for the next 15 years and a good deal is available and that's why they can decide to buy before April-May. So, consumer behaviour will be felt only after the vehicles are placed in the market and the prices of every competitor are announced. That's why it is tuff to judge the way the market will move but we are readying ourselves to respond in the way the consumer responds and face them. This is why, we are not spending so much time in anticipating what the customer will say, however, we are preparing ourselves to respond swiftly to whatever the customer says.

Q: What are your inventory levels at the dealership level at present?

A: The inventory levels are very low due to good Diwali and festive season and I feel that we will have to do a bit more billing in retail, particularly in November, to meet the demand. However, we don't want to go on the stock build-up path because the transition from BSIV to BSVI is lying ahead. But, the inventory levels are quite low and are manageable.

Q: Bajaj has a good presence in the premium bike segment. So, update us about your market share in the segment and expected growth in it amid competition?

A: Pulsar is our brand in the premium/sporty segment and has done extremely well as our market segment has gone up in the segment. I can also say that no other brand has thrown a challenge to us in the last two-three months. Thus, we are at the leadership position with a 45% market share. Every model of Pulsar - may it be Pulsar 150, Pulsar 180 or Pulsar 220 - are doing well. However, has the segment has seen a slowdown because the costs went up due to the inclusion of ABS but within that slowdown, our market share has increased as a continuous pace. When it comes to the executive mileage segment at the entry levels, then our market share has increased in the segment but it hasn't been as we have seen in the premium segment. But, there is a good thing has happened in the executive segment and that is the launches made to upgraded our customers from 100cc to 110cc have been a successful one. Thus, our major sales in the executive segment have shifted from 100cc to 110cc, as Bajaj Platina 110 and Bajaj CT110. This is a good thing for the company because they are a better product with better margins.

Q: You have several superbike brands like KTM, Husqvarna and Triumph. So update us on Triumph and by when and in which segment it will be launched and when Husqvarna brand will be launched in India? Will 2020 is going to be an important year for all these?

A: Yes 2020 is a very important year because the series of new product launches will speed up as soon as the transition period to BSVI is over. Husqvarna's bikes will be launched in the first week of December and it will be available for retail sales from January or February. Similarly, high-end bikes at 790 levels and more will be launched in the KTM segment. However, Triumph will take time because it is going through the design and development stage.

Q: Let us know about the response of the three-wheeler business, which has a large contribution to the profitability of Bajaj Auto. How much focus you will have on the electric three-wheelers? And, how are you seeing the EBITDA margins for the overall business?

A: There is a pickup in the three-wheeler business. It was slightly down for a meanwhile but there is some improvement in it. However, the industry hasn't come out from the negative zone but the negative rate that stood at the double-digit negative zone of about -20% has been brought down to -8-9%. Besides, our market share has risen at a continuous pace and has reached 61% in the industry. And all the three segments, namely cargo, big passenger and small passenger, are doing well. Secondly, the way the CNG pipeline is being laid down has increased its availability and this increase is converting the diesel market into CNG. This is good for customers, pollution, society as well as Bajaj. It is good for us because change is our biggest strength and we have more than 80% market share in almost every section in the domain. Thus, installation of CNG pumps in regions where diesel pumps are available is just increasing those markets inclination towards Bajaj Auto which is good for us. As far as electric autos are concerned then it will take time but something will be launched in upcoming 4-5 months. But electric as a business - either it is for two-wheeler or three-wheeler - needs certain improvements like charging ecosystem, battery prices and they should be brought under control to give a boost to it. The electric business will come but the tipping point will reach only when all the forces will converge to create a charging ecosystem.

Bajaj Chetak electric scooter to be available in 100 cities soon