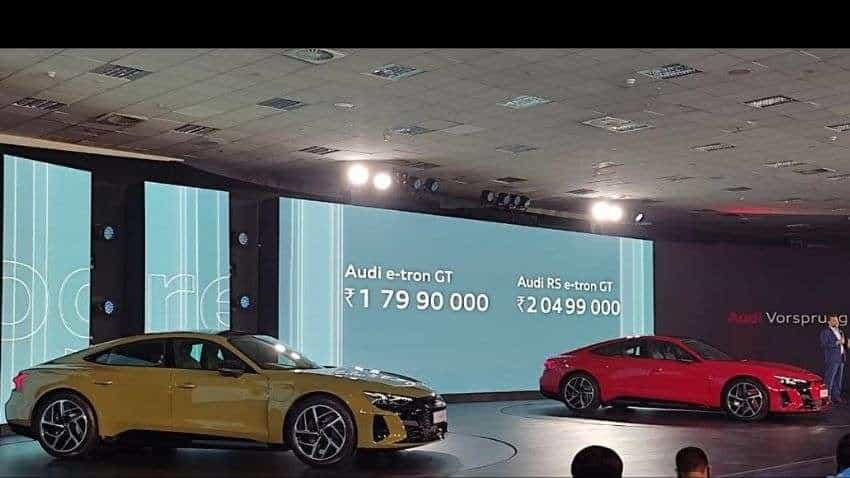 "By 2025, Audi India plans for 15 per cent of its product portfolio to be all-electric vehicles. Audi will focus on four key areas - customer relations, products, digitisation, and network," said Balbir Singh Dhillon, Head of Audi India.

The Audi e-tron GT comes with a futuristic design with bold sculpted lines, while upfront the signature e-Tron pattern panel instead of a grille. Matrix LED headlights are standard in the RS e-Tron GT and are available as an option on the regular e-Tron. Audi laser light is available as an option for both models. The car will come with wheel size options ranging from 19- to 21-inch with aero blades. At the rear, the car gets an end-to-end LED taillamp with arrowhead-shaped LED light signature.

The e-tron GT comes with a 12.3-inches instrument cluster with a virtual cockpit and a 10.1-inch MMI touchscreen display as standard. The system supports natural voice commands and Audi Connect services. The MMI navigation plus comes with a Wi-Fi hotspot as standard offering intelligent navigation with e-Tron specific functions.

With its 84-kWh net energy content, the high-voltage battery enables ranges of up to 488 kilometers; with its 800-volt technology, it can be recharged extremely quickly. Whether chassis, lights, controls, networking or e-tron sports sound: the Audi e-tron GT quattro and the RS e-tron GT went on pre-sale at the same time in mid-February 2021.

Whether it's the chassis, lights, controls, networking, or e-tron sports sound: both models demonstrate concentrated technical expertise - and Audi's great passion for the smallest details.

In combination with the electric drive system, the fully variable quattro drive ensures power is distributed intelligently to the individual wheels. When sufficient traction is available, it sends power primarily to the front axle.

The booking for the e-tron GT model has already started with Rs 1 lakh, but the booking amount for the RS e-tron GT is not cleared.