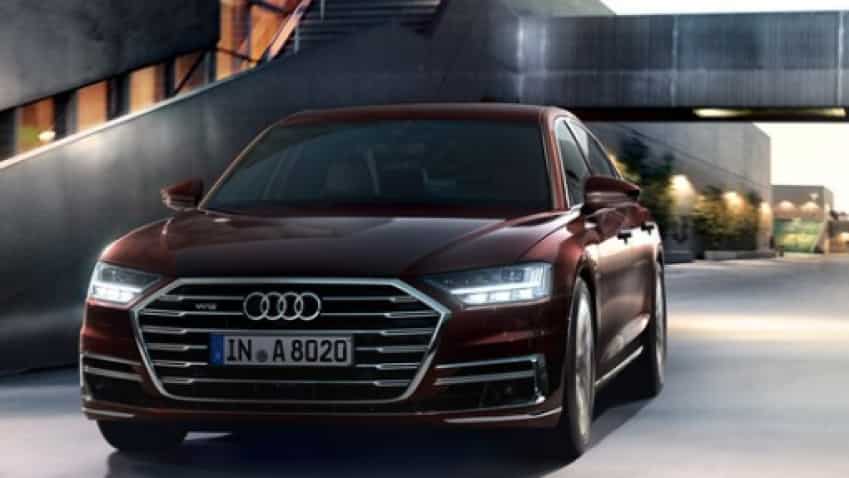 Audi A8L is powered by a 3.0-litre petrol engine, which generates 340 horse power (hp) and can accelerate from 0-100 in 5.7 seconds Source: Website
Written By: PTI
Edited By: ZeeBiz WebTeam
RELATED NEWS

German luxury car maker Audi on Monday launched the fourth generation of its flagship sedan, Audi A8L, in India with price starting at Rs 1.56 crore (ex-showroom). The Audi A8L is powered by a 3.0-litre petrol engine, which generates 340 horse power (hp) and can accelerate from 0-100 in 5.7 seconds.

Commenting on the launch, Audi India head Balbir Singh Dhillon said, "The new A8L marks the dawn of a new design era for brand Audi. The car is sophisticated, technology and feature rich."

Stating that the company has fundamentally re-engineered the car in its fourth generation, Dhillon said the A8L has larger dimensions and is heavily customisable.
"We want customers to customise their car keeping in mind their likes and requirements and are confident that the new Audi A8L will witness the same success that its predecessors have enjoyed in the country," he added.

He said the A8 forms an important part of Audi's product portfolio for 2020 that focuses on the push for C&D segment cars.

"The A8L is our third completely new BSVI-compliant model launch after the all-new Audi A6 and Audi Q8," he added.

Dhillon said that as India moves to BS-VI emission norm from April 1, Audi will enter the new era with petrol vehicles only.

"At this point in time, for the time being, we will not bring in diesel cars. Effective April 1, when we move from BSIV to BSVI, our cars will be petrol cars," Dhillon told PTI.

He, however, added, "We have not given up on diesel though. We are still evaluating, for the time being at least for a year or so we will run this strategy of petrol only."

The German luxury car manufacturer had launched the Audi Q8 model on 15 January 2020. The Q8 is equipped with a 3.0 TFSI engine that generates 250KW (340 hp) and 500Nm of torque. Audi Q8 has amazing capability to propel itself from 0-100 kmph in 5.9 seconds. It is priced at Rs 1.33 crore onwards. "The machine is a combination of a four-door luxury coupe and a versatile SUV. Richly equipped, comprehensively connected and tough enough for off-road duty, the Audi Q8 55 TFSI is a composed companion for business and leisure," Audi had said in a statement.