India imports its first US oil at Paradip 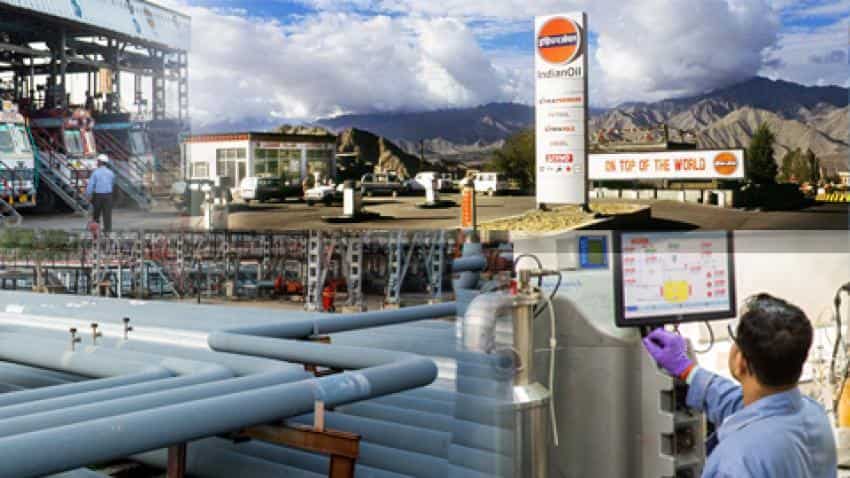 A function was held at the Paradip port to mark the arrival, which was attended by officials of IOC, oil ministry and the US Embassy. Image Source: File photo/ IOC official website
Written By: PTI
RELATED NEWS

LPG cylinder subsidy not credited in your bank account? Here is how you can check on mylpg.in

IOC close to big breakthrough, will help government eliminate all single-use plastic by 2022

Apollo Tyres, IOCL to Tata Power: Which shares should you invest in?

India today received its first ever shipment of US crude oil with state-owned Indian Oil Corp (IOC) importing a 1.6 million barrels parcel at Paradip in Odisha.

MT New Prosperity, a very large crude carrier (VLCC), with a capacity to haul two million barrels of crude, left US Gulf Coast on August 19 and arrived at Paradip port.

"IOC will process the crude at its refineries located at Paradip, Haldia (in West Bengal), Barauni (in Bihar) and Bongaigaon (in Assam)," the company said in a statement.

A function was held at the Paradip port to mark the arrival, which was attended by officials of IOC, oil ministry and the US Embassy.

"IOC, which became the first Indian public sector refiner to source US crude, has placed a cumulative order 3.9 million barrel (of US crude)," it said.

"The total volume of the crude presently contracted by Indian public sector refineries is, therefore, 7.85 million barrels," the statement said.

This is one of the first shipments to India since the United States stopped oil exports in 1975, and follows recent commitments to US oil purchases by Indian state refiners, a separate statement issued by US Embassy said.

"US crude oil shipments to India have the potential to boost bilateral trade by up to USD 2 billion," the Embassy statement said.

Indian companies, both public and private, have invested about USD 5 billion in US shale assets. They have also contracted 5.8 million tonnes per annum of liquefied natural gas (LNG) from the US and the first shipment is expected to be delivered to India in January 2018.

The Indian government has encouraged state-controlled refiners to buy US and Canadian crude from the US Gulf coast as it looks at cheaper alternatives that have emerged due to global supply glut.

While in the first purchase IOC is importing 1.6 million barrels of high sulphur crude Mars from the US and 400,000 barrels of Western Canadian Select oil, in the second it has bought 1.9 million barrels of US crude, half of it being shale oil. The second shipment is expected in a months time.

Buying US crude has become attractive for Indian refiners after the differential between Brent (the benchmark crude or marker crude that serves as a reference price for buyers in western world) and Dubai (which serves as a benchmark for countries in the east) has narrowed.

Even after including the shipping cost, buying US crude is cost competitive to Indian refiners, an industry official said.

The IOC deal cames within weeks of Prime Minister Narendra Modi's June-end visit to the US when President Donald Trump talked of his country looking to export more energy products to India.

MaryKay Carlson, Charg d Affaires at the US Embassy, termed the oil imports as a significant milestone in the growing partnership between the US and India.

"The United States and India are elevating our cooperation in the field of energy, including plans for cleaner fossil fuels, renewables, nuclear, and cutting edge storage and energy efficiency technologies. We look forward to working together on further sales of US crude and exploring opportunities to expand the role of natural gas in India," Carlson said.

During their June 26 meeting in Washington, Trump and Modi committed to expanding and elevating bilateral energy cooperation through a strategic energy partnership.

The leaders called for a rational approach that balances environment and climate policy, global economic development, and energy security needs, the US Embassy statement said.

"President Trump affirmed that the United States continues to remove barriers to energy development and investment in the United States and to U.S. energy exports so that more natural gas, clean coal, and renewable resources and technologies are available to fuel India's economic growth and inclusive development," it added.

To encourage US crude purchases, the government has allowed refiners to use a foreign rather than an Indian-owned vessel for the purchase. Indian refiners typically have to use domestic vessels for their crude imports.

LPG cylinder subsidy not credited in your bank account? Here is how you can check on mylpg.in

IOC close to big breakthrough, will help government eliminate all single-use plastic by 2022

Apollo Tyres, IOCL to Tata Power: Which shares should you invest in?