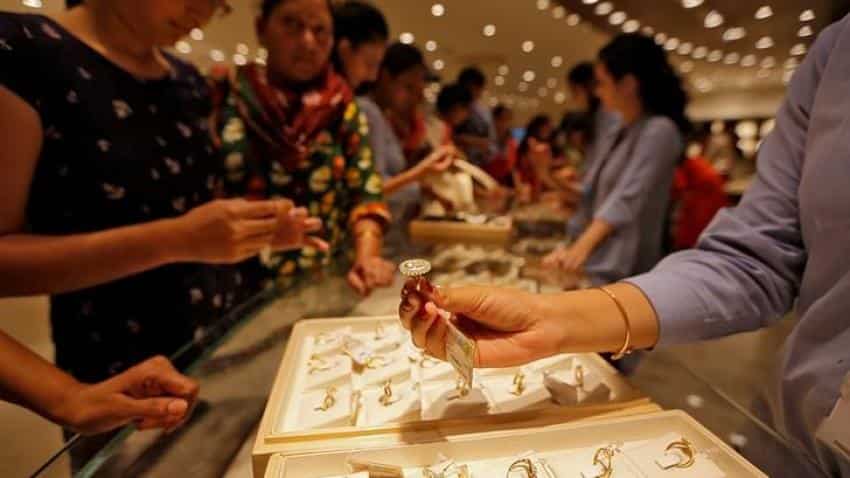 A sales person shows a gold ring to customers at a jewellery showroom during Dhanteras, a Hindu festival associated with Lakshmi, the goddess of wealth, in Ahmedabad. Image Source: Reuters
RELATED NEWS

Gold prices inched up early on Wednesday as investors remained cautious ahead of the release of minutes from the U.S. Federal Reserve`s last meeting, which could offer hints on the outlook for the central bank`s monetary policy. FUNDAMENTALS

The Fed is "reasonably close" to its goals and should keep gradually raising U.S. interest rates to avoid the dual pitfalls of letting inflation drift below target for too long, and of driving unemployment down too far, Fed Chair Janet Yellen said on Tuesday.

U.S. home sales increased more than expected in October as hurricane-related disruptions eased, but a chronic shortage of houses which is pushing prices beyond the reach of some first-time buyers remains an obstacle.

The Bank of Japan is dropping subtle, yet intentional, hints that it could edge away from crisis-mode stimulus earlier than expected, through a future hike in its yield target, according to people familiar with the central bank`s thinking.

Bank of England rate-setters spelled out their differences on Tuesday over the central bank`s first interest rate hike in a decade, as they focused on how to determine when low unemployment was about to push up inflation.

Following the collapse of German coalition talks, the prospects for a meaningful leap forward in European cooperation, driven by newly minted governments in Berlin and Paris, look dimmer than ever.

The dollar dipped against its peers on Wednesday, weighed down as U.S. Treasury yields failed to rise despite increasing investor risk appetite in the broader financial markets.

Asian shares scaled a fresh decade-peak on Wednesday thanks to surging markets in Europe and America, as strong global growth and rising corporate profits lured hordes of investors into equities.

The global platinum market deficit will rise sharply next year thanks to resurgent demand from the jewellery and industrial sectors and declining production, an industry report said on Tuesday.