Under the terms of the all-stock deal, Fox assets that will be sold to Disney, including the Twentieth Century Fox movie and TV studio, cable networks and international operations will be valued at around $29 per share, the source said on Wednesday. 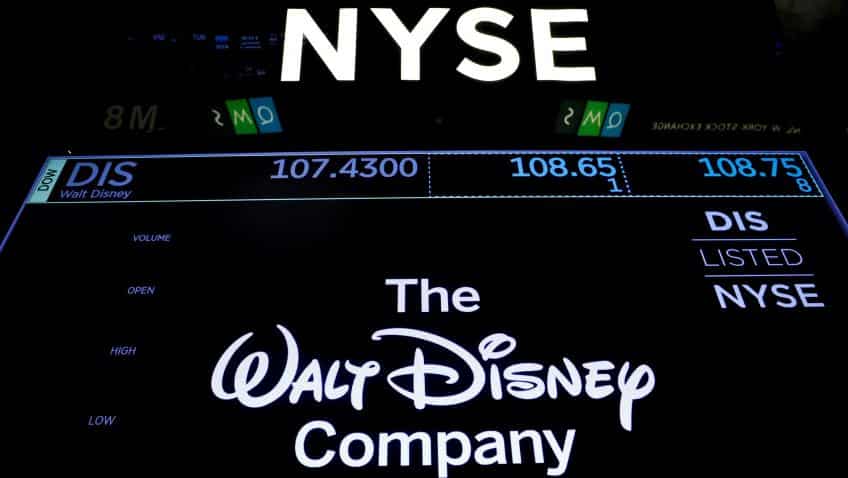 A screen shows the trading info for The Walt Disney Company company on the floor of the NYSE in New York. Image source: Reuters

Walt Disney Co`s deal to buy film, television and international businesses from Rupert Murdoch`s Twenty-First Century Fox Inc will value the latter at over $40 per share, or $75 billion, a person familiar with the matter said.

The deal, which is set to be announced on Thursday, will end more than half a century of expansion by Murdoch, 86, who turned a single Australian newspaper he inherited from his father at age 21 into one of the world`s most important global news and film conglomerates.

Under the terms of the all-stock deal, Fox assets that will be sold to Disney, including the Twentieth Century Fox movie and TV studio, cable networks and international operations will be valued at around $29 per share, the source said on Wednesday.

Fox`s remaining assets, focused on news and sports, will be offered to existing Fox shareholders in a new company likely to be valued at more than $11 per share, according to the source, who asked not to be identified ahead of an official announcement.

Disney and Fox did not immediately respond to requests for comment. Fox shares ended trading on Wednesday at $32.75, giving it a market capitalization of around $60 billion. The Wall Street Journal first reported the exact terms of the deal.

The deal will mark a return by Murdoch to focus on the news business, his lifelong passion. Australian-born Murdoch inherited his father`s newspaper business in 1952 and transformed it over many years, acquiring premiere properties such as the Wall Street Journal, the London Times and the 20th Century Fox movie studio.

Murdoch`s shift to selling assets rather than buying them has come as a surprise to many who expected him to hand over the businesses to his sons, James and Lachlan.

None of the Murdochs are expected to be given board seats at Disney, according to the sources.

Disney has been struggling to bolster its TV business as cancellation of cable subscriptions is pressuring its biggest network, sports channel ESPN.

Under the deal, Disney will gain access to 46 million subscribers in three major markets, the United States, Western Europe and India, according to Barclays analysts.

It is not clear how the deal will be treated by U.S. antitrust regulators, given that it looks set to reduce competition among movie studios. The U.S. Department of Justice recently sued to block AT&T Inc`s $85.4 billion deal to buy Time Warner Inc, on the basis that it will raise prices for consumers and competitors.

Fox would keep its news and business news divisions, its broadcast stations and Fox Sports, according to sources familiar with the details of the deal being sought by Disney.

That would leave Disney swallowing the bulk of one of the world`s biggest media conglomerates.

Following is an outline of the resources and assets of the united company if the deal goes through:

-Disney, which has a market value of around $166 billion, would acquire Fox`s FX and National Geographic cable channels, its movie studio, India`s main network Star and a stake in European pay-TV provider Sky PLC .

-The combined company would own or operate 272 TV stations globally, according to the latest SEC filings.

-Fox and Disney together took in a total of $16.3 billion in advertising revenue in the 2017 financial year.

-Barclays analysts also calculate that the combined movie and TV libraries of Fox Studio and Disney`s Buena Vista studios, which includes Pixar Animations and "Star Wars" producer Lucasfilm, has more titles than that run by Netflix.

-The studio businesses generated $16.6 billion in total revenue in fiscal year 2017, according to the latest annual filings.

-Data from film industry website Box Office Mojo together gives Fox and Disney around 30 percent of an estimated $10 billion in box office taken by U.S. cinemas so far this year, making the new company the single largest player ahead of Warner Bros with 20 percent.

-Disney plans to pull its first-run movies from Netflix starting 2019. If it did likewise with Fox programming, Netflix would lose "The Simpsons", the "Star Wars" franchise and all Marvel superhero films.

-The deal would give Disney access to characters including X-Men, Wolverine, Deadpool and the Fantastic Four from the Marvel comic book universe.

-Disney`s library of kids content also dwarfs Netflix`s, with over 700 titles compared to around 400, according to Barclays.