2018 started with a bang due to euphoric atmosphere that existed in mid-caps and small-caps in the second half of 2017. In fact, 2017 was a year of optimism. 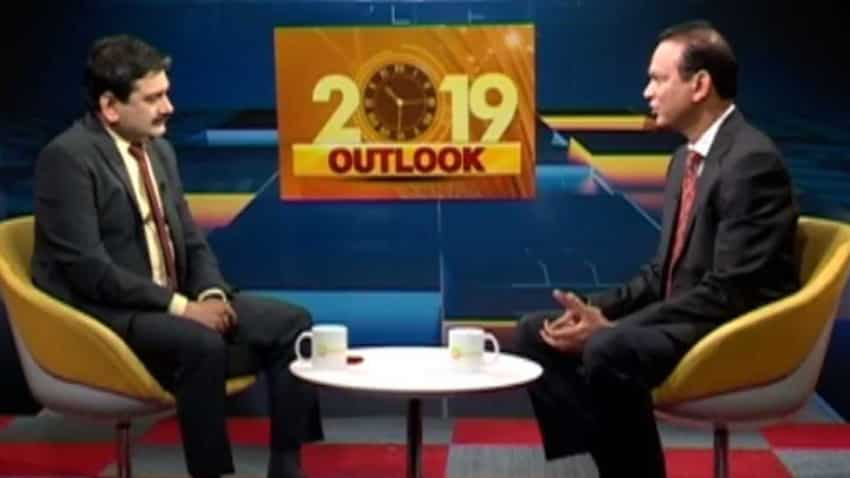 ‘Price Dictates the View’ best defines the time, where old investors kept investing with a feeling that the trend will continue, says Sunil Singhania.
Written By: ZeeBiz WebTeam

Sunil Singhania, Founder, Abakkus Asset Manager, speaks about market performance in 2018, the reason for the fall in the US market and how the economy will perform in 2019, among other things during an exclusive interview with Anil Singhvi, Managing Editor, Zee Business. Edited excerpts:

Did the year 2018 go as per your expectations?
2018 started with a bang due to euphoric atmosphere that existed in mid-caps and small-caps in the second half of 2017. In fact, 2017 was a year of optimism. ‘Price Dictates the View’ best defines the time, where old investors kept investing with a feeling that the trend will continue. But corporate results, by January end, brought a realisation that the price movement is not going in the right direction. Later, crude prices and rupee valuation, which was acting as a tailwind, reversed and acted as a headwind for the macro section. However, the trend has reversed once again at the end of the year. The year 2018 has been a year full of surprises.

It was a year of reversals, but President Trump’s fear didn’t have a major impact on the domestic market in the first half of the year and now, the American market is falling. What can be the reason behind it?
I feel, Trump’s policies are good for the US economy as well as its market. He says, 'Make America Great' and talks about 'Make in America'. In the process, he has reduced tax rates and incentivised companies asking them to bring back their international investments back to the country. In fact, year 2017 and the first half of 2018 were the years of America, when the equity markets gave good returns. There was an atmosphere where their technology stocks like FAANG (Facebook, Apple, Amazon, Netflix and Alphabet’s Google) reached all-time high mark and 2-3 companies reached 1-trillion-dollars.

But, the environment has changed in the last 3-4 months due to reasons like turn-by-turn resignations of members of his core team and an unending debate with China. Third, the view that America is good for investments because the returns were becoming good and the dollar would remain strong have changed.

For instance, the view that the US interest rate will grow by 4 per cent has come down to 2.9 per cent. The interest rates remained intact at the previous level despite the Federal Bank having hiked interest rate by 25 bps and dollar has gone flat in the past 2-3 months, and the margins have also declined. As a result, those who invested in the US market by pulling out their money from other markets have started investing outside the country, and that is one of the reasons that emerging markets are outperforming the US. And, I feel the trend will continue in 2019 as well.

It means, one can easily predict/estimate our market just by keeping an eye on crude prices and rupee valuation. The market will go down if crude price goes up and there is a depreciation in rupee and will go up if the rupee and crude are favourable?
No. Have a look at the period of 2003-2008 when rupee appreciated, and the crude prices also moved from 100$/barrel to 140$/barrel. Thus, no factor in isolation is important as all these factors together create a situation that dictates the market. I think the medium to long-term movement is dependent on the economy and its earnings.

Do you think we are marching into the new year 2019 as a strong economy?
100 per cent. We are entering 2019 on a high note and as a strong economy. Have a look at the government securities (G-Sec), which have come down from 8.25 per cent to 7.25 per cent in just a month’s time. The interest rates, which were raised due to NBFC concerns, have returned back to a considerable extent. There is an improvement in liquidity situation and inflation is also very low. I feel RBI may cut down the interest rates by 25 basis points in next 6 months.

Similarly, Index of Industrial Production (IIP) also stood above 8 per cent. All these factors together suggest that a tailwind is being created. Now, we will have to see whether this tailwind is getting translated into company earnings.

Do you think that the equity market will remain bullish in 2019?
I always have a positive view for the market, but the general elections, scheduled to be held in mid-2019, can be a matter of concern as history suggests that election acts as a trigger for the market. But earnings estimates for the FY20 will stand around 20 per cent and corporate banks, which will move out from the losses, will act as a tailwind for the growth. Such earning growth will create optimism in the market.

What are your market expectations from the general elections?
The market remained optimistic despite the recent assembly election results were not quite favourable for the current government. The optimism ends the fear that the market will be halved if there is any probability, 2-5 per cent also, that the current government will not come back to power. The likeliness for the leader and the incumbent government may have some effect, 5-10 per cent, on the market, but it will not have any major impact on it.

If we talk about Indian market then do you think that after this big event, the market will end above the 2018 levels at the end of 2019?
I think the market should provide a double return from the current levels.

Do you think that the corporate-bank earnings are going to be a theme for 2019? Do you think that private and corporate banks will go bullish?
They have been the best-performing stocks for the last 3-4 months. In addition, analyse their, ICICI Bank, Axis Bank and State Bank of India, performance of the last 7-8 years and you will find that big portion of their operating profit has gone in the provisioning of the bad debt. This is something, where recognition of an NPA ends the chances of providing interest, which leads to a decrease in your income. Similarly, provisioning of the bad debts closes all gateways to earn profits.

But the things have changed and if NPAs, like Bhushan, SRCL or others, are sold then there will be a change of hand, which means that the bad loans are converted into a good loan where interests are repaid, and provisioning requirements will come down. Our calculations suggest that some of these banks can grow five times on a low base, but these three banks can help Nifty earnings to go up by 10 per cent.

Do you think that year 2019 is going to be a good one, in terms of performance and stock prices, for the public-sector banks (PSBs)?
Small PSBs may face some challenges due to capital shortage and that’s why they will need the government’s capital support at all levels. Secondly, the core of any bank is deposit and accounts. But, the atmosphere has changed where people with reasonable wealth prefer to open their account in a private bank instead of a public bank, and this is eroding the core raw material of the bank, i.e, the deposit base, and that is why they are losing their market share.

I think PSBs with good CASA can still play, but as a trailing bat. If you have a view of 3-5 years, then you will have to focus on the very large public sector banks (PSBs) or private banks.

Name other themes that can work for the market in 2019?
Government has a special focus on infrastructure growth. Have a look at the order book of good EPC companies, which stand at the highest level and their margins are also good. Plus, they are working to reduce their debts. I feel that the infrastructure sector can be a good alpha play if the trend continues for next 1-2 quarters and the next government, whosoever comes in power, has the will to boost the sector.

FMCG and consumption stocks have always played well in the context of India. Do you think people, traders, should invest in these stocks?
Earlier, I had a discussion on stocks with one of my friends where Hindustan Unilever erupted as a good example, whose profit hasn’t grown even by 2.5 per cent in the last 5 years, but its market cap has increased 12 times in the same period. This means its Price-to-Earnings (P/E) has gone up to 77 from 17.

This is basically optimism and I feel this is a result of their shift towards quality and safety. I feel such kind of P/E is not justified at least when the company has failed to report huge growth. Consumption theme is a strong theme, but I feel that we will move from consumption staples to consumption discretionary.

Differentiate between the two things?
Staples are the things that are consumed under every condition like soap and detergent among others, while discretionary means I will invest if I have ample money to do so. Thus, discretionary spend will increase as the standard of living increases. I think the discretionary story will grow more than staples.

Do you think that unlisted companies provide more opportunities to make money than the listed companies? Swiggy made me think that way.
There is a difference in the thought process of investment in the two segments. In the process, one must see that Swiggy is a result of 100 such investments. Besides, private equity carries a different risk and that’s why investors of the segment should have a different risk profile as private equity is high-risk high game equity, and my experience belongs to the listed space.

Do we have investment opportunities in mid-cap and small-cap segments?
I think the biggest opportunity is in the small caps because reclassification of mutual fund by SEBI has brought much money into the segment as it provides opportunities to invest only in 150 companies, which are priced very high. But the small-caps, providing ample opportunities, have an option of providing a return of around 20-25 per cent. A lucky investor, however, can get a return of only around 12-18 per cent by investing in mid-cap and large cap.

Equity, fixed-income, gold and real-estate are few options where a person can invest. Name a segment that will provide maximum returns by end of 2019?
I will go with equity, 2018 was very challenging, but have a look in rupee terms then you will find that equity has done better than others as people took out their money from fixed income and gold remained flattish. The same was the case with real estate, which has crawled down. On the other hand, the equity investors mainly of the large-cap were able to earn a return of minimum 7-8 per cent.

What can be the biggest opportunity and negative factor in the market for year 2019?
Clearly, elections and I feel it will have a short-term impact, but it is going to be a very important thing. Secondly, there is a need for stability in the US market.

What are your plans for 2019?
We launched First Fund in July-August with a target to reach a milestone of Rs 1000 crore by December 2018, and we are almost there and will be able to meet it by end of the month. Apart from this, we will also launch a small-cap fund by January or February 2019, as I have a positive view of the small cap. We will have a target of taking it to an Assets under management (AUM) of Rs 2000-2500 crore.