Entertainment has lured many traditional businesses to try their hands into this lucrative market with various tie-ups and collaborations. In one such one of its kind deal UAE’s media giant Khaleej Times has stuck a deal with innovative entertainment platform FilMe 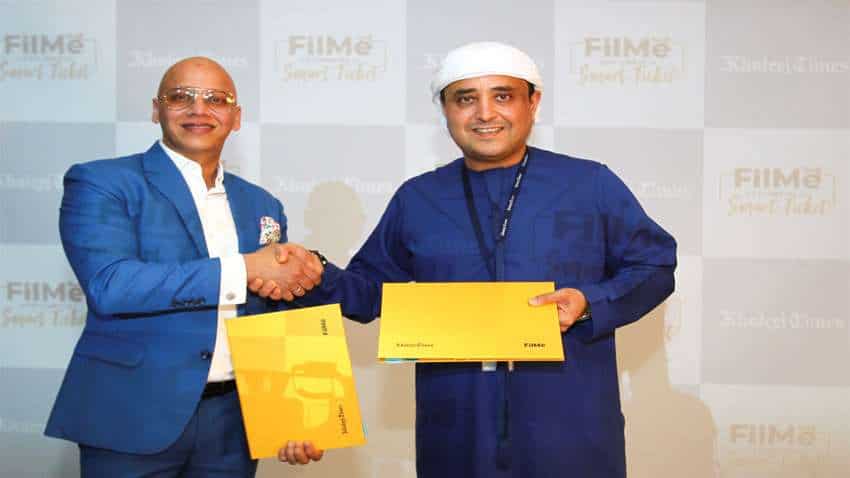 Khaleej Times readers can experience this innovative product in the comfort of home through its publications, in physical and digital forms
RELATED NEWS

Entertainment has lured many traditional businesses to try their hands into this lucrative market with various tie-ups and collaborations. In one such one of its kind deal UAE’s media giant Khaleej Times has stuck a deal with innovative entertainment platform FilMe. As per the deal Khaleej Times will distribute Indian movies in Gulf countries with the help of FilMe. With this partnership Khaleej Times becomes the first media house in the world to offer first-day, first-show movies. Khaleej Times readers can experience this innovative product in the comfort of home through its publications, in physical and digital forms.

FilMe  which is striving to reshape the entertainment landscape with UAE’s leading media group, Khaleej Times to bring its readers the latest movies, facilitated by a simple scan of a QR code. As learned about the partnership, Khaleej Times’ print and digital channels will carry a unique QR code, which can be scanned using mobile phones. Once scanned, the “e- cinema” experience begins in less than 10 seconds.

FilMe has collaborated with leading Bollywood and South Indian film studios and producers to showcase latest content. This exclusive partnership will allow FilMe to premier first day first show Bollywood and South Indians films directly for Khaleej Times readers across the UAE. Through FilMe’s innovative solution, customers will not require any subscriptions, downloads or sign ups to watch the latest movies. They will find the QR code on all Khaleej Times channels. FilMe works seamlessly on all smartphones and offers a one-of-a-kind “e-cinema” experience.

Speaking about the partnership, Suhail Galadari, Co-chairman, Galadari Brothers, said: “Khaleej Times has always been a popular stopover for Bollywood stars. Now, I am delighted to announce that we have become the first newspaper/media house in the world to offer a first day, first show of the latest Bollywood movies to our readers from the comfort of their homes through a QR code. This partnership with FilMe has helped us take our love for Bollywood to a whole new level.”

“FilMe’s partnership with Khaleej Times is a unique event as never in history have movies been released through a media house. This association will also be seen as a paradigm shift in the way film distribution business is conducted. We firmly believe FilMe, with its technology and content, alongside Khaleej Times’ 9.5 million unique userbase a month shall ensure massive reach across the region will make this partnership impactful from the word go. We are an easy to use, safe and secure e-cinema.” Says Dr. Abhishek Shukla, Founder and CEO FilMe.

“The tie-up with Khaleej Times gives us a great distribution strength, and with our strategic and customized marketing approach we intent to reach out to maximum number of customers and explain to them about the concept of FilMe and its core benefits. With the help of this association we intend to mount First Day First Show movies on a much bigger scale than their traditional theatrical release in UAE market” says Roopesh Jain, Head of Marketing at FilMe.

For the starters, FilMe is a market disruptor in the entertainment industry, with its patented new technology which enables viewers to watch content with a QR code and comes in the form of a physical card. FilMe recently acquired the Tamil blockbuster Master starring Vijay and Vijay Sethupati within 15 days of its theatrical release. It has also acquired critically acclaimed Malayalam film The Great Indian Kitchen and few major announcements are lined up shortly.