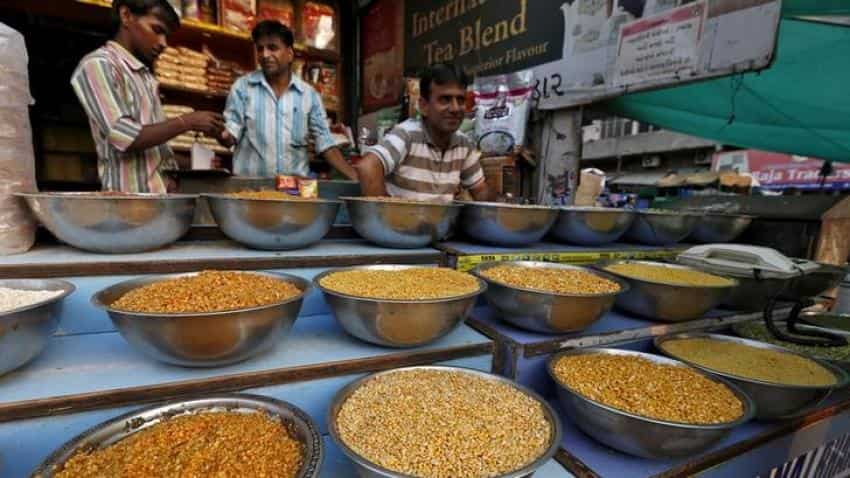 FILE PHOTO: Pulses are kept on display for sale in a shop at a market in Ahmedabad. Pic: Reuters
Written By: Reuters
RELATED NEWS

India`s retail inflation is expected to have picked up slightly in July after cooling in the previous three months, a Reuters poll showed, but likely remained well below the central bank`s 4 percent medium-term target.

Much of the increase is attributed to the return of food inflation. Vegetable prices have risen sharply following erratic monsoon rains.

The consumer price index likely rose 1.87 percent last month, after dipping to an historic low of 1.54 percent in June, according to the median forecast of nearly 30 economists.

"Vegetables like tomatoes and onions caused a bit of disruption with price rises driven by uneven monsoon rains. However, the new season will start by September and the arrival of new stocks should ease some of the recent pressure," said Tushar Arora, senior economist at HDFC Bank.

Food and beverages account for nearly half of the consumer price index basket and are largely dependent on the monsoons - which deliver about 70 percent of India`s annual precipitation.

Uneven distribution of rainfall so far this year could lead to lower grain production, which would increase imports of edible oils, pulses and sugar, pushing prices up. It could also limit exports of cotton, rice and feed ingredients.

The Reserve Bank of India (RBI) cut interest rates last week - making it the first Asian central bank to ease this year - but maintained its neutral stance and said inflation could accelerate.

"The (next) RBI rate decision will depend on the August inflation figure, which comes before the October policy meeting," said Nikhil Gupta, economist at Motilal Oswal Financial Services.

Gupta added the RBI could cut rates once more if inflation remains below or at 2 percent.

However, a July 28 Reuters poll predicted the central bank would cut in August but then keep on the sidelines until at least 2019 as economic growth is expected to accelerate.

A goods and services tax (GST), implemented on July 1 with the aim of replacing multiple cascading taxes, should help India reclaim its position as the fastest growing major economy this year, a July Reuters poll suggested.

But so far the new tax policy has led to confusion over product pricing and a downturn in activity among both services and manufacturing firms, private surveys showed.

In the run up to the implementation of the tax policy, industrial production in June rose 0.6 percent after rising 1.7 percent the prior month, the poll also found.