In a special address here at the World Economic Forum Annual Meeting 2019, Abe said when he came back to office as prime minister in 2012, many were thinking Japan was doomed and the argument was its population was ageing and it could not grow. 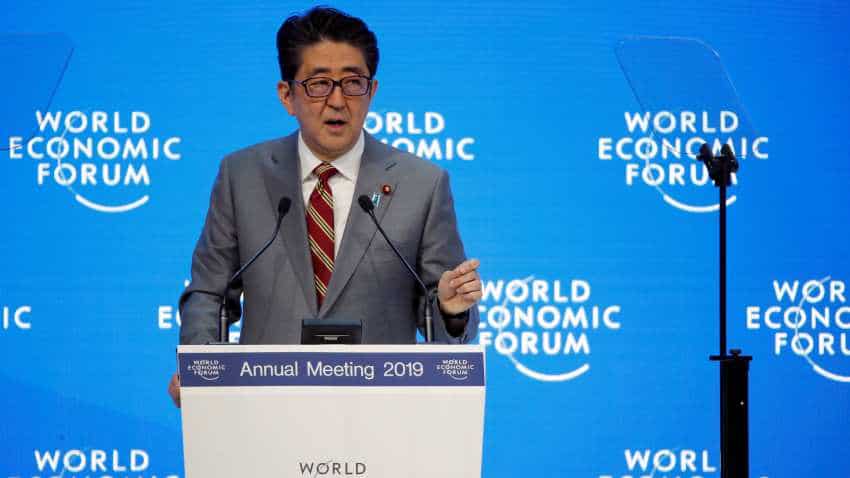 Abe said companies have raised the wages and the country's GDP has grown strongly in the last six years. Image source: Reuters

Japanese Prime Minister Shinzo Abe on Wednesday asked world leaders to rebuild trust in the international trading system and urged countries like the US, China and India to breathe fresh life into the WTO. He also cited the example of his own country for creating a new hope-driven economy, asserting that Japan has "defeated the defeatism" by pushing 'womenomics' to tackle the problem of its ageing population. As the new Chair of G20, he also said Japan is committed to preserving and enhancing the free, open, and rules-based international order.

In a special address here at the World Economic Forum Annual Meeting 2019, Abe said when he came back to office as prime minister in 2012, many were thinking Japan was doomed and the argument was its population was ageing and it could not grow.

"It was a wall of despair, a wall of Japan pessimism. Since that time, our working-age population has dropped by 4.5 million people. We have responded by pushing hard for 'womenomics', encouraging more and then still more women to work, while lessening the burden on women's shoulder," he said.

As a result, the country now has 2 million more women employed, the rate of female labour participation has hit 67 per cent, an all-time high for Japan, and higher than, say, in the US, he said. All of this has "defeated defeatism", Abe added.

"Meanwhile, the number of people over 65 still actively working has also increased by 2 million, thanks to our policies that enable them to keep working... Out of every 100 college graduates looking to work, 98 find employment, also a record number," he said.

Abe said companies have raised the wages and the country's GDP has grown strongly in the last six years.He said he sees Japan hosting the G20 Summit in June as a chance to regain optimism for the future, providing reassurance that it is possible to achieve a hope-driven economy like in Japan.

"I would like Osaka G20 to be long remembered as the summit that started world-wide data governance," he said. "It will be great if every one of us, from the US, Europe, Japan, China, and India, to leap frogging countries in Africa, share our efforts and our successes in breathing fresh life into the WTO," Abe said.

Regarding his second top priority for the G20 Osaka summit, Abe said there was a need for disruptive innovations for climate change.

On the changing international order, Abe asked the world leaders to "rebuild trust toward the system for international trade. That should be a system that is fair, transparent, and effective in protecting IP and also in such areas as e-commerce and government procurement".

He said the US, Europe and Japan must join forces to facilitate changes within the WTO, especially its rules for government subsidies.

"The Osaka Track, needless to say, will make the WTO more relevant in the age of the data-driven economy... Hope matters more than anything when it comes to generating growth," he said.

"Most importantly, this year, for the first time in as long as 200 years, His Majesty the Emperor of Japan will abdicate and a new Emperor will take the throne. It is the dawn of a new era.

"Japan, now reinvigorated and revitalised, with your embrace, will continue to be one of the foremost open, democratic, and law-abiding contributors to peace and growth in the world," Abe said.

To address the decline in its working population, Japan has recently approved measures to increase the number of foreign workers ? as many as 340,000 skilled workers would be invited to Japan from abroad ?, drawn up plans to expand its free education programme and introduced policies to empower elderly workers.

"A long-awaited positive feedback cycle is taking root, with growth in employment and income generating greater demand and even more employment," Abe said.

Talking about his vision for 'Society 5.0', the Japanese leader stressed the importance of a society driven by borderless data and worldwide data governance to leverage future growth.

Every day, more than 2.5 quintillion bytes of data come into being, which, according to one estimate is as much as 250 times the printed material in the US Library of Congress, he was quoted as saying in a release issued by the WEF.

"In Society 5.0, it is no longer capital but data that connects and drives everything, helping to fill the gap between the rich and the less privileged.

"Services of medicine and education, from elementary to tertiary, will reach small villages in the sub-Saharan region," Abe said.