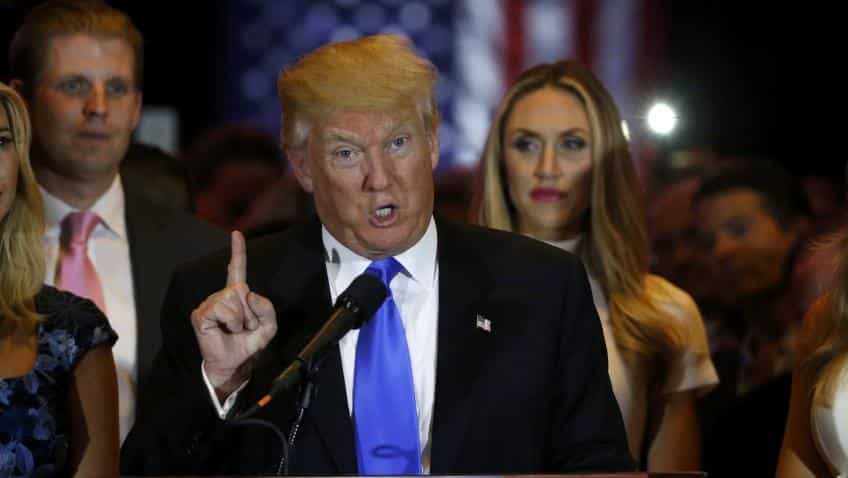 The RNC (Republican Party) has accepted Donald Trump as the presumptive nominee for the upcoming US Presidential elections. This came after Trump won the Indiana and Ted Cruz ended his campaign.

The RNC chairman Reince Priebus tweeted after the Indiana results stating that Trump will be the presumptive nominee. He further said, "We all need to unite and focus on defeating Hillary Clinton."

The New York billionaire, who has never held public office and who repeatedly defied pundits` predictions that his campaign would implode, now can prepare for a matchup in the Nov. 8 election with Hillary Clinton expected to be his Democratic opponent.

Clinton`s march to the Democratic nomination, however, was slowed by rival Bernie Sanders` victory over her in Indiana.

Trump, at a victory rally at Trump Tower in New York, walked on stage with wife Melania and other family members as the Rolling Stones` "Start Me Up" blared over loudspeakers.

He is likely to formally wrap up the nomination on June 7 when California votes, although Ohio Governor John Kasich vowed to stay in the race as Trump`s last challenger.

Republican National Committee Chairman Reince Priebus called Trump the party`s presumptive nominee in a tweet and said, "We all need to unite and focus" on defeating Clinton.

As the vote returns flowed in, Cruz announced that he has ended his campaign at an event in Indianapolis, with his wife, Heidi, at his side. Cruz, 45, sounding beaten but defiant, said he no longer sees a viable path to the nomination.

"Together we left it all on the field in Indiana," said Cruz, a U.S. senator from Texas. "We gave it everything we got. But the voters chose another path, and so with a heavy heart, but with boundless optimism for the long-term future of our nation, we are suspending our campaign."

Cruz had hoped to show he was still a factor in the race. Some in the crowd expressed shock at the decision by Cruz, who had been the last serious challenger to Trump out of an original field of 17 candidates.

Hunter Wilkins, 17, of Orlando, Florida, a Cruz volunteer in Indianapolis, said he was blindsided by Cruz`s departure from the race as he hurried out of the venue.

"I wasn`t sure," he said somberly.

Dan Follis, 62, was too rocked by Cruz`s announcement to know for sure his next thought on the campaign. But he was sure of one thing: "I will not vote for Trump."

Trump was on track to take over 50 percent of the vote with Kasich running a distant third.

"Ted Cruz, I don`t know if he likes me or doesn`t like me. But he is one hell of a competitor. He is one smart guy. And he has got an amazing future," Trump said.

Trump also sounded a note of unity, reaching out to both Hispanics and African-Americans as he talked about ensuring jobs and saying he would "make America great again."

"This is going to be a beautiful and loving country," Trump said.

Cruz had been counting on a win in Tuesday`s primary to slow the New York businessman`s progress toward the nomination. But Trump rode momentum from wins in five Northeastern states a week ago to wrest Indiana from Cruz, whose brand of Christian conservatism had been expected to have wide appeal in the state.

The loss for Cruz was a sour ending to a rough day in which he got entangled in a harsh back-and-forth with Trump.

Cruz termed Trump a "serial philanderer" - likely as part of his strategy to try to win the support of evangelical voters. Trump, in response, said Cruz had become "more and more unhinged."

The only hope Kasich has for becoming the Republican nominee is to somehow deny Trump the 1,237 delegates he needs to win the nomination outright and force Republicans at their July convention in Cleveland to choose one of them.

Kasich vowed to stay in the race.

"As long as it remains possible Governor Kasich will fight for the higher path. Ted Cruz ran a strong campaign, stood for conservative principles, and exposed a lot about Donald Trump. Governor Kasich will continue to campaign and offer the voters a clear choice for our country," said Kasich senior strategist John Weaver.