Donald Trump said that he needs to correct "tremendous" trade imbalance with Japan, suggesting there may be a major announcement on the issue in August. 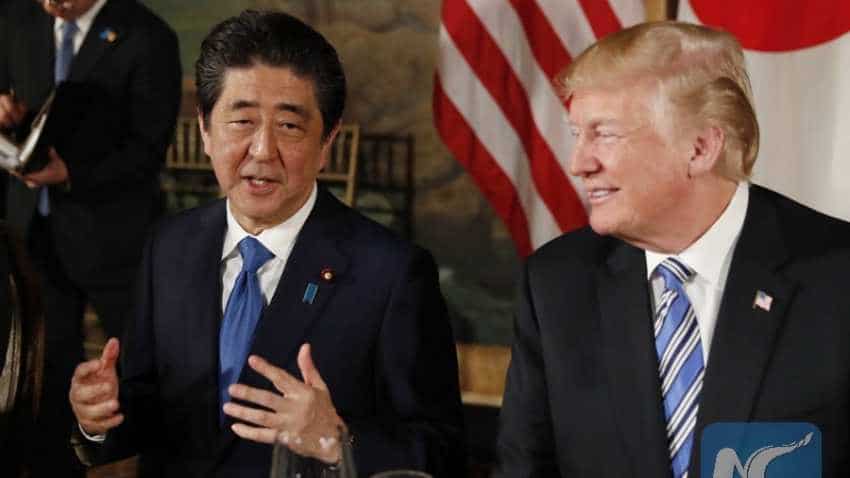 Donald Trump that both countries will work to rectify what Trump sees as a lack of fairness in his country's economic relationship with Japan. Photo: Reuters

Visiting US President Donald Trump on Monday said that he needs to correct a "tremendous" trade imbalance with Japan, suggesting there may be a major announcement on the issue in August.

"Trade-wise, I think we will be announcing some things probably in August that will be very good for both countries," Kyodo News quoted the President as saying following the meeting between Trump and Japanese Prime Minister Shinzo Abe here.

He added that both countries will work to rectify what Trump sees as a lack of fairness in his country's economic relationship with Japan.

"We'll get the balance of trade, I think, straightened out rapidly," added Trump, who is on a four-day state visit.

In response, Abe said: "I'd like to have in-depth discussions over global challenges such as North Korea, the US and Japanese economies, and coordinate bilateral efforts toward a successful Group of 20 summit."

Trump's comments came after he tweeted on Sunday that "great progress" had been made in trade negotiations but added: "Much will wait until after (Japan's) July elections where I anticipate big numbers."

Trump, sitting alongside Abe, said the bilateral relationship had "never been better than it is right now" as both nations were "committed" to each other.

Despite their differing views on trade, the two leaders on Sunday played a round of golf, witnessed a sumo wrestling tournament where Trump handed out the awards to the winner and they ended the day with a hibachi dinner that included grilled Wagyu beef and vanilla ice cream.

At the Imperial Palace here, the Emperor and Empress Masako received Trump and First Lady Melania amid a prevailing festive mood over the start of Reiwa Era, which began when Naruhito ascended the throne on May 1 after his father stepped down on April 30 to end a three-decade reign.

Before his meeting with Abe, Trump also said that he was willing to talk to Iran to ease the ongoing tensions between the two nations while highlighting the mediation role Japan could play in the process.

Bilateral tensions over trade continue to simmer as negotiators have so far failed to reach a deal as pursued by Trump, who told Japanese business leaders in Tokyo, including the President of Toyota Motor Corp, that he wants to make bilateral trade "a little bit more fair", Kyodo reported.

Japanese and US officials have downplayed the prospect of a major breakthrough at the summit -- the second of three planned over a three-month period.

Japan, for its part, has been calling for the removal of US duties on imported industrial products.